Millville, all of Cumberland County hope to bask in benefits of locating solar field along Nabb Avenue. 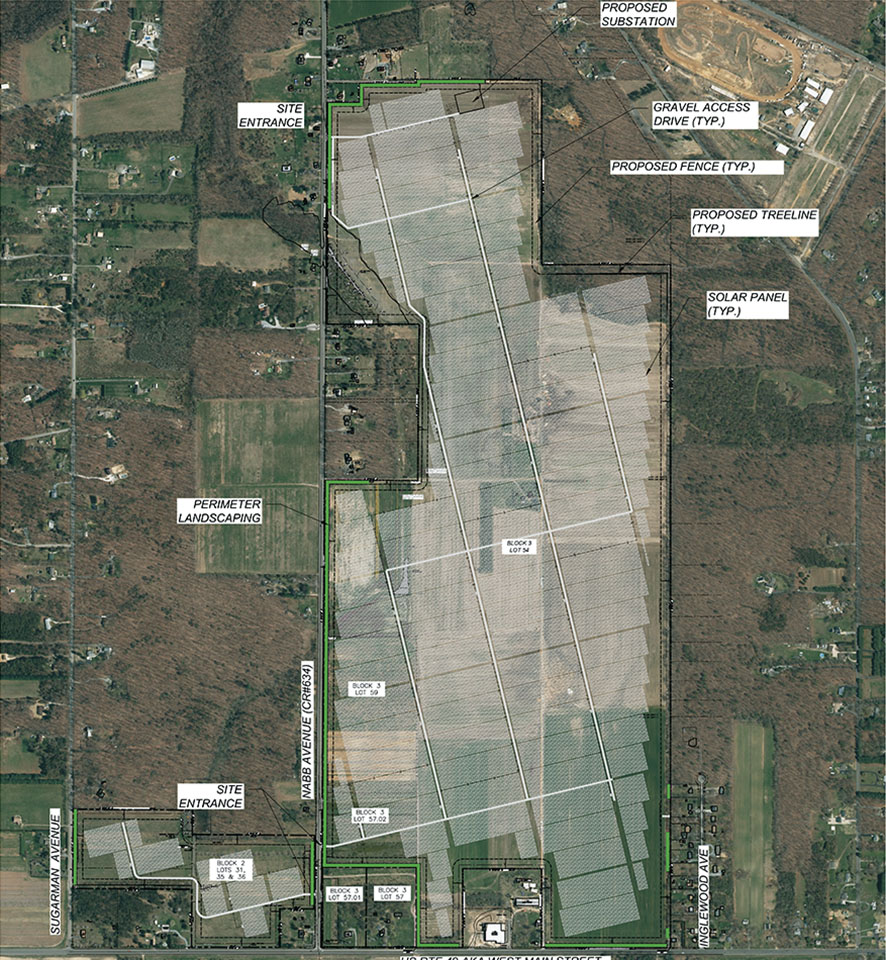 by Ahmad Graves-El and Deborah A. Ein

Much like a field of sunflowers following the sun across the sky each day, solar panels on a solar field planned for Nabb Avenue in western Millville will similarly capture the sun’s rays. The Millville Planning Board unanimously approved a 50-megawatt solar energy farm at its January 12 meeting, with construction expected to commence this fall, and operation planned for a year later.

Dakota Power Partners, with offices in Millville and in Denver, Colorado, is investing an estimated $70 million in the project, called Nabb Solar I. The solar energy farm, to be located on 379 acres along Nabb Avenue, is predicted to bring hundreds of jobs and millions of dollars into Cumberland County. 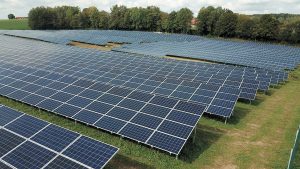 Based on a design description in Dakota’s Nabb Solar Overview report, the electrical will be comprised of a 1500v DC below-ground collection system, a 34.5 kV AC above-ground collection system, and a 69 kV above-ground tie-line about 1,950 feet in length linking the solar farm with a new substation on the corner of Nabb and Sherman avenues, which will be built by Dakota.

The installation is equipped with trackers that follow the movement of the sun from east to west across the sky to maximize the production of renewable energy.

This solar energy project is the first of several expected to take place in the county in the near future. Local leaders say projects like these will benefit the community.

“Cumberland County has a handful of large solar projects currently under development,” says Cumberland County Board of Commissioners Director Joe Derella. “These utility-scale solar projects produce significant revenue for the towns, school systems, and County as the land under them is moved out of agricultural assessment and into full taxation, or a payment in lieu of tax agreement in some cases.”

Derella, Dakota principal and co-founder Timothy Daniels, the Millville City commissioners, and Millville Mayor Mike Santiago are in agreement that Nabb Solar I is a winning move that will not place burdens on local services.

“This is what the future of energy looks like in New Jersey,” Mayor Santiago was stated as saying in the press release. “The City of Millville is thrilled to be co-creating that future with Dakota Power Partners because solar is the perfect neighbor for our community; it makes no noise and creates no burden for City and County services.

According to the press release, this project also “intends to achieve generating capacity totaling more than 1,000 megawatts—enough energy to power 175,000 households, which equals the total number of households in Cumberland, Salem, and Gloucester counties combined.”

The Dakota Overview report claims the project will generate 150 to 200 construction jobs and has committed to hold a jobs fair, use union labor and “utilize local labor and service providers to the greatest extent.”

“The IBEW applauds the City of Millville for embracing this project,” said IBEW Local 351 Business Manager Dan Cosner, also president of the Southern New Jersey Building Trades Council. “We hope the State of New Jersey enthusiastically supports utility-scale solar projects in our state. These projects will help New Jersey meet the renewable energy goals set-forth in the Governor’s Energy Master Plan in a cost-effective manner while giving working families an opportunity to help build an energy-independent future for our state.”

Some residents, however, have questioned if the construction and operation of this solar project will be a detriment to wildlife and the farmlands that Nabb Solar I will be built on, as well as the surrounding environment.

According to the press release, solar farms “…have virtually no impact on the environment—the solar farms [utilize] no fertilizers, pesticides or herbicides. And, unlike traditional power plants, solar farms consume no water and generate no wastewater, which means healthier rivers, lakes, and aquifers.”

Dakota Power Partners has pledged to “plant native, pollinator-friendly grasses as groundcover to protect against erosion and to increase biodiversity at the sites.”

Jeff Tittel, director of the New Jersey Sierra Club, an organization whose mission is to help protect the environment, applauds the project: “Allowing solar on farms can help, especially because the panels can be raised up to allow farm activity underneath. We can build a large-scale solar project on farmland in a way that allows for grass growth, sheep grazing, or pollinator plants. Solar panels can also be clustered in only a small part of the farm or built on areas that aren’t growing crops like rooftops, buildings, or parking lots.”

“In Cumberland County,” Derella added, “we have 40 percent of our land preserved permanently, which means it is not only off limits to solar but is off limits to all future development.”

Interior roads will be gravel, and the entire project area will be surrounded by a six- to seven-foot fence topped with barbed wire, the report notes.

After the 30-year project is complete, Dakota will remove all the above and below ground equipment—except for the substation, which will remain onsite—and return the land to its previous farmland condition, according to Derella.

Tittel and Derella both reiterated the importance of projects like Nabb Solar I.

“We need to come up with ways to help struggling farmers and stop land speculators from cashing in on developments,” said Tittel. “A lot of farms in New Jersey aren’t protected. We believe that if you can grow a McMansion or a warehouse on a farm field, then you should be able to put solar there instead. Building farms on solar will help produce green energy and improve water quality.”

“[T]hese utility-scale solar projects produce a number of other economic development benefits for the community in the form of construction jobs, O&M [Operations & Maintenance] jobs, and procurement of goods and services from local vendors,” Derella said.

“The bottom line is that a utility-scale solar project can literally be a game-changer for some communities,” Derella concluded, “especially in a county such as Cumberland.”