When Ice Was King

...and why current scarcity is worrisome. 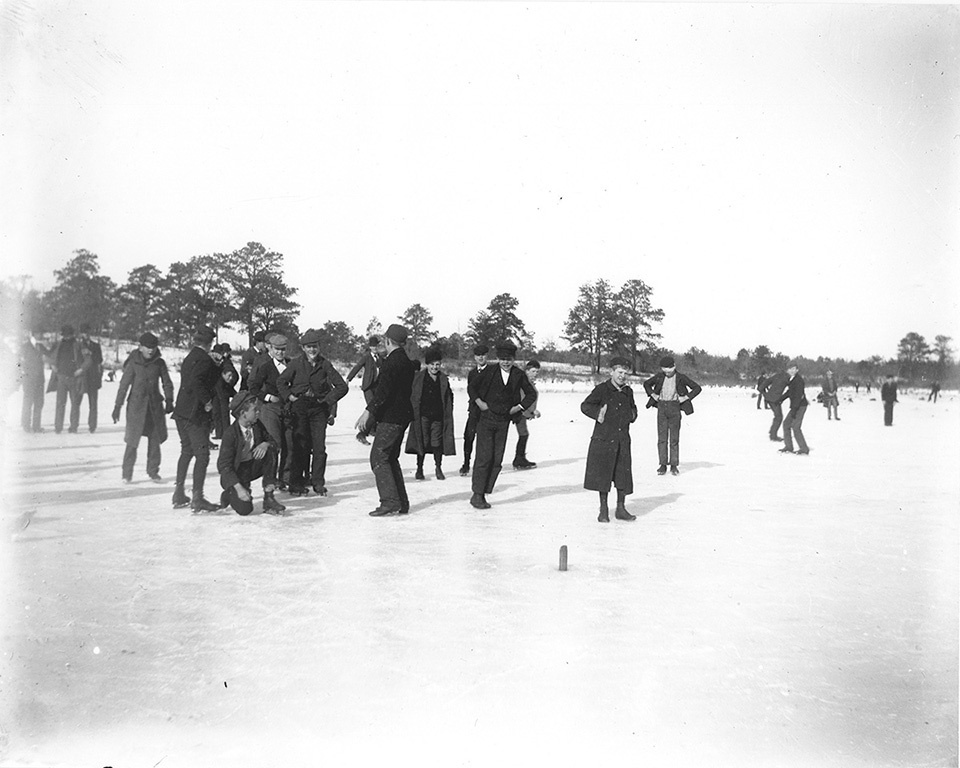 Until I was 10 years old we lived in northern New Jersey where we got more cold weather and snow than here in “the south.” As ponds showed signs of icing over my father would get out our skates and sharpen the blades. His were big hockey skates while my sister’s and mine were figure skates. My parents would layer our clothing so much that my arms could not be lowered to my sides: I looked like the Michelin Man on blades.

You would think with so much padding that falling wouldn’t hurt. I guess my father was optimistic that I’d be able to skate crossing foot over foot like him. He would hold my hands locked across his body, gliding me across the ice. But when left to my own devices my feet would slip out from under me in rather spectacular fashion, especially considering I was primarily standing still. Stranded, I would beg him to rescue me as I stood like a popsicle in need of propulsion. Sadly I never became a skater; I was more of an ice walker and hot chocolate drinker.

After the 1998 Olympics my six-year-old daughter was all about Tara Lipinski, skating about the house in stocking feet. As far as I could tell the only thing they had in common was blonde hair. Unfortunately it seemed that my daughter had inherited my ice-skating skills. We went to a winter resort skating rink with a number of families, where we outfitted the kids in skates. We left the teens in charge and took off for groceries. Disembarking the car upon our return, we heard an enormous wail from inside the rink. My husband inquired, “What was that?”

To which I resignedly replied, “Tara Lipinski, I think.” Indeed, aka Tara had broken her arm, only reaffirming what I already knew: Ice is hard and cold.

In the 1980s Union Lake would still sometimes freeze over so that we could skate. By then I knew skating wasn’t my calling. A group of us made an ice boat, affixing two planks in a cross and attaching three blades and a Sunfish sail. The seat was where the boards crossed and in front of that was a foot peg to steer a central front blade, with a blade perpendicular to the seat on each side of the pilot.

We looked like big kids on a boxcar minus the box and wheels. All of us knew how to sail but none of us knew how to operate an iceboat. We clocked it at over 60 miles per hour; smooth ice offers little friction. When it was my turn I slipped off the crossed boards and my Carhartt jumpsuit and buttocks were heated up by the contact with the ice. I slid off the seat but refused to give up the ride, holding on by my calves. Eventually I managed to plant the front blade in the only unfrozen section of ice on the lake.

As winters in southern New Jersey became warmer we would drive some distances in search of snow for our daughters to enjoy. Our pursuit once led us to Valley Forge National Historical Park. There the snow had a sheet of ice on top known as “crust.” We packed what was called a flying disc, which I might add has no steering mechanism. On soft snow you can lean one way or the other and encourage a direction, but ice is unyielding. An enormous steep hill was partially encircled by a bend in the road. It was determined that I would “fly the disc” down the hill and my husband would drive the curve to the bottom and pick me up. My daughter’s eyes lit up in anticipation of my demise. I was feeling rather full of myself, thinking I was quite a “disc” aficionado, forgetting that I had broken a tooth as a child launching just such a disc off a wall.

This time, the disc rapidly took off and about a third of the way down the hill it started to heat up on the pebbly ice-encrusted snow. Seeing trees growing in a depression at the bottom of the hill, I realized my likely destiny—possibly breaking more than a tooth. I attempted to dig my boots into the “crusty snow”—to no avail. They simply heated up as well. Then about 20 feet before the trees I bailed. I really do owe the Carhartt company a thank-you note.

These days my relationship with ice is more closely related to its geological importance and vodka than to sports—shaken, not stirred, thank you. Today, along with others, I am taking ice and primarily the absence thereof a lot more seriously.

Historically Union Lake froze in many consecutive winters, enough so that workmen would cut up to 18-inch-thick blocks of ice from its surface and take them to Whitaker’s Ice House in Millville. First saws were employed; later horsedrawn ice-cutters would harvest the sections. Eventually, gas-powered circular saws were used. Horsedrawn sleds could carry 300-pound blocks across the frozen surface. At Whitaker’s the ice was insulated in sawdust or burlap.

For almost 100 years, from the 1840s until the 1930s, homes had iceboxes, not refrigerators. This was a wood cabinet lined with tin, equipped with a compartment for a block of ice. In the early 1900s harvesting ice was one of the top 10 industries in America. As often as three times a week homes would place a card in their window indicating whether they wanted one or two blocks of ice delivered.

In Millville ice arrived by horsedrawn wagon and outside of town it was trucked to homes and businesses. The Whitaker Ice House was adjacent to the railroad tracks where the Millville Rite Aid is now located, and the product was shipped by rail and boat. Farmers still purchased ice, made in commercial refrigeration units, as recently as the 1980s. Many of us can remember grandmas in the ’50s using the old “icebox” for kitchen storage like a huge bread box.

Today in southern New Jersey the weather rarely supports a frozen lake surface that anyone could even walk on, let alone provide massive blocks of ice. Our climate is changing!

Pollution from the Industrial Revolution and commercial refrigeration killed the ice harvesting industry. The climate in southern Jersey never supported a major ice industry as was established in New England and the Great Lakes region of North America. Many of these towns celebrate their past with an annual ice harvest event, some of which can be viewed in videos on the internet.

Frozen waters play a geologically important role in our landscape. Ice sheets have polished the earth’s surface rocks for millennia. When water freezes its molecular structure creates hydrogen bonds increasing its volume by 9 percent. The expansion of freezing water can burst pipes as well as split rocks when it fills their cracks. When the water thaws, smaller particles are moved along with it. The great Ice Age pushed a massive glacial flow across the face of our state in an advancement that ended north of southern New Jersey, so that we were left with the fine grains of what was pushed and carried across the landscape. Thus we are in the coastal plain with our celebrated sands.

About 67 percent of the earth’s freshwater is held in ice caps and glaciers. Melting glacial ice is extremely valuable to many regions of the world that rely on it for fresh water. But glaciers must grow—cold winters, snow, and ice production are essential for fresh water to be available during spring thaws.

Glaciers also play an important role in cooling the earth. In Norway we hiked to the foot of a glacier and experienced “glacial wind.” It was a warm summer day, but near the face of the glacier we needed winter apparel as we were met by stiff cold gusts of wind. This is a localized effect caused when melting ice cools the air above the glacier. That air becomes heavier than the ambient air, and then it flows down the valleys creating a steady wind surrounded by warmer localized weather.

NASA found that sea ice is growing faster during winter months than it did decades ago, but there’s a catch: The melting in summer is much more rapid. The overall effect is a net loss caused by global warming (NASA and Forbes). We’ve all seen the “poster-child” polar bears imploring us to curb our use of fossil fuels. We’ve seen the maps of our disappearing ice caps. The melting of Greenland and Antarctic ice sheets contributes to 20 percent of sea level rise. Many major coastal cities and seaside towns are threatened by rising waters.

Ultimately, I have embraced the chilling truth. We need to curb our emissions of greenhouse gases and accept the hard and cold fact that we need ice.

Geology in Our Times

I used to think the power of ice was primarily confined to the eons of wear and tear that stemmed from prehistoric times. My earth science professors would point to boulders and say, “These were pushed by an ice age millions of years ago.” Twenty years later, I had revelations about the present-day powers of ice. We went to Ausable Chasm, a natural history tourist destination in New York State, around 1995 and again in 1997 or ’98, only to witness the devastation that had occurred on January 19, 1996. On that morning it was 20°F., but in just 12 hours the temperature rose to 75°F. Several feet of snow melted and record rains fell.

Thundering waters sent massive ice blocks through the closely spaced walls of the chasm. It tore the tourist catwalks from the sides and 60-foot-tall trees were uprooted and swept downstream. Seventy-foot steel bridges were ripped from their foundations and hurled into the river, and boulders the size of Volkswagen Beetles were strewn at the end of the Chasm over several acres. (Ausable Chasm website). Clearly ice continues to sculpt the face of the planet.