Planet Earth would be uninhabitable without insects—the ones we like and the ones we loathe. 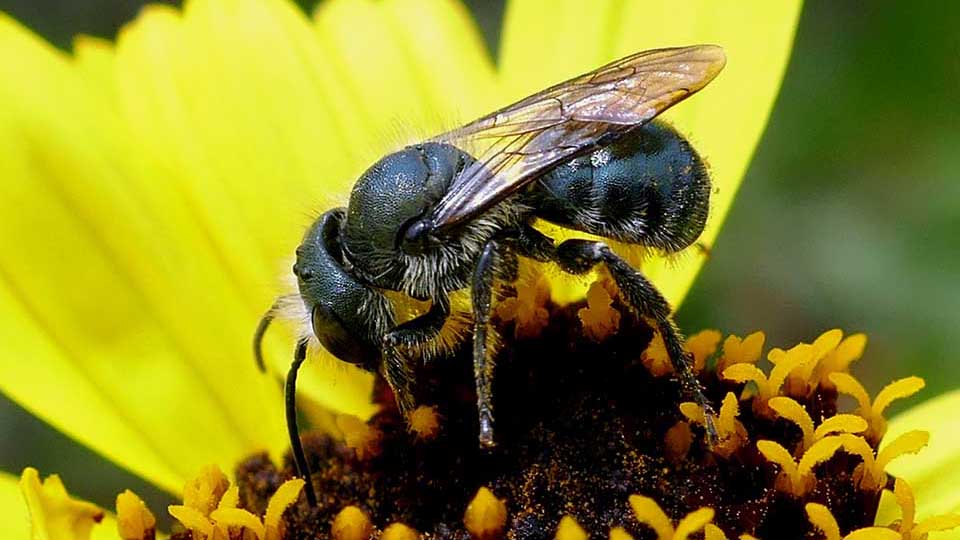 Native mason bees are two to three times better pollinators than honeybees. At least 30 percent of the world’s crops and 90 percent of our wild plants rely on pollination for reproduction. CU File Photo
by J. Morton Galetto, CU Maurice River If you’re a reader of nature articles, love perusing National Geographic, or adore Sir David Attenborough as I do, then you are likely aware that insect populations are in dire straits. If you are not cognizant or want a better understanding of the topic, permit me to recommend a new book, The Insect Crisis, The Fall of the Tiny Empires that Run the World, by Oliver Milman.

Yes, animals other than insects are teetering on the brink of extinction. However, as Milman duly points out, we notice and lament the white rhinoceros species’ last day on planet earth (as well we should), but miss the steady decline—and in many cases the disappearance—of entire groups of insects. It’s a lot harder to bring attention to the demise of a stonefly that tumbles to the bottom of a mountain stream at Glacier National Park, than, say, a polar bear adrift on a solitary ice floe.

In 2019 the leading international journal in conservation science, Biological Conservation, reported a 40 percent decline in insects globally. Not only are there fewer species, but also the numbers within certain species are decreasing. Depending on the study locale the declines can vary from 50 to 75 percent; in one place in rural Denmark there’s been a 97 percent decline.

In aggregation, insects make the other animal kingdoms seem miniscule. Three-fourths of known animal species on earth are insects. The reality is that we can’t live in a world without insects, period—not just the ones we like, but the ones we loathe too.

Oliver Milman opens his book by painting a world without insects. He makes it clear that our planet would be undesirable as well as uninhabitable without insects. He writes, “You would certainly have mass starvation, societal unrest…. It’d be a place where there would be rotting feces and corpses everywhere because dung beetles and other insects that break down those materials would be gone.”

Milman notes that dead trees, leaves, and stick piles would be mountainous. Without insects there would be no new topsoil. And the world’s beauty would diminish, since nearly all flowering plants rely on pollinator insects.

People who are 50 and older have been doing their own anecdotal surveys on the decline of bugs. We used to spend hours removing insects from our cars’ grills and windshields. One scientist has actually conducted a lifetime of surveys, driving the same routes with his car and doing body counts.

Our constant adjustment to a new normal leaves each new generation with no reference to the past and no understanding of change; my young relatives just stare at me when I tell stories of car grills plastered with bugs. This is not to suggest that I miss cleaning bugs off my car, but rather to say that without a frame of reference we don’t notice change.

Habitat changes affect insect populations, especially monocultures that tend to support or favor one species over another. If you plant thousands of acres of corn you’ll attract and support something that likes corn. Thus, Europe is increasingly requiring people to grow more diverse crops on farmed acres. In this battle, there are winners and losers, with mosquitoes, especially the exotic ones, increasing.

While many staples like wheat, rice, and corn are pollinated by wind, the color and many of the vitamins on our plates come from avocados, blueberries, cherries, plums, raspberries, apples and others; in fact more than a third of our food crops needs a steady stream of insect visitation.

The Intergovernmental Science-Policy Platform on Biodiversity studied 3,000 scientific papers in 2016 and estimated that the global value of food production affected by pollination reaches $577 billion annually.

While the United States relies heavily on honeybees, most other regions depend on native pollinators. Honeybees need continuous and skilled care to keep them in tip-top shape to do their jobs, as one malady after another attacks this commercially domesticated army of pollinators.

We can quantify the loss of specific fruits and vegetables. But how does one place a value on a world without the wonder of lightning bugs, monarch butterflies, luna moths, click bugs with headlamps, and all of the others.

One example does give me withdrawal symptoms. Cocoa is pollinated by a midge—a fly that doesn’t necessarily like the sunny plantations where cocoa is typically grown commercially, but rather prefers a shadier forest setting. I for one do not plan to go without chocolate, so I say let’s make the midge a poster child for saving insects!

In his book, Milman gives numerous examples of how reliant we are on insects while reviewing many important studies that point to their severe decline. The author devotes many paragraphs to the work of entomologists around the world who study the insect crisis, and endeavors to interpret their findings.

The book shares a collection of devastating facts and figures, but our very existence depends on understanding the problem and advocating for solutions. In light of the facts regarding plummeting numbers, I often wondered what kept me turning pages. My persistence derived from two things—first, the entomologist’s work and his wealth of knowledge are truly fascinating. Secondly, solutions to the crisis appear throughout the book though they are not always immediately obvious. I found myself continually analyzing what was written to understand how society might do things differently to help sustain insect populations. The solutions are not always complex, but getting society to commit to change may be difficult.

There appears to be agreement on the major causes of the crisis—pesticide use, large-scale modern-day agriculture, habitat loss, light pollution, climate change, and lawns.

There’s bad news and good news: We are not free of culpability when it comes to the insect crisis, which means we can play a role in solutions. Since many of our readers have property, let’s talk about lawns.

Milman notes, “In 2005, scientists at NASA used satellite imagery to make a startling discovery. Lawns, including commercial lawns and golf courses, are the single largest irrigated crop in America in terms of surface area. Lawns sprawl across 49,421 square miles of the United States, about three times the area taken up by corn crops.”

Keeping lawns tidy in this country is a $36 billion industry in which some 59 million pounds of pesticides are applied each year. At the best of times, a lawn is not a good insect habitat. Whatever bugs are present likely lack diversity because a lawn is a monoculture. A variety of plants attracts a greater variety of insect species that keep each other in check, eliminating the need for pesticides.

On the topic of manicured and sterile properties, Milman introduces Professor Jane Memmott and my hero Douglas Tallamy, who offer alternatives to lawns. Memmott suggests that people aim for a “bohemian untidiness,” and she further simplifies, “You can’t personally help tigers, whales, and elephants but you really can do something for the insects, birds, and plants that are local to you.” Insects thrive on less tidiness and on a variety of pollinator plants.

You may remember celebrated entomologist Tallamy’s achievable vision, in which Americans convert half of their lawn to native plants. This would collectively provide habitat greater than all of the lower 48 states’ national parks combined, resulting in the greatest single private conservation accomplishment of our time. But can American society commit to that? Consider this year’s droughts and now contemplate this fact: U.S. residential lawns use $7 billion of water each day. If we are to survive we must commit to changes in the way we manage our properties and expend our water and other resources.

Milman spends a good deal of time explaining the demand for almonds and their pollination. In California’s Central Valley the crop is staggeringly large—1.7 million acres and increasing to meet the demand for almonds and almond products such as almond milk. Each year 85 percent of the commercially managed beehives are transported for the pollination of this crop. That is 2.3 million beehives and 30 billion bees. Planned expansion will increase demand by an estimated 600,000 hives. The industry’s approach and rethinking of growing methods makes for great reading.

Honeybees have been the poster child for insect decline primarily because of our heavy reliance on them for our crops and food supply. Floyd Shockley, who manages the Smithsonian’s collection of some 35 million insects, is critical of all the attention that honeybees get as a “celebrity” insect. In the United States we have 4,000 wild bee species, and globally there are more than 20,000 species. But honeybees are essentially a domestic animal originally imported from Europe! Some in the academic community want the public to understand there is not just one “poster child” insect or animal that maintains life on earth—rather there is a vast diversity of species with their many interdependencies.

We must comprehend the pervasive actions causing insect declines and extinctions if we are to develop solutions to rectify the problem. Our culture often dismisses the largest group of critters in the animal kingdom as “creepy crawlers” that need a good dose of insecticide for our world to be habitable. In fact nothing could be farther from the truth.

Insects are a cornerstone, the very foundation that supports diversity on earth; they sustain us. Milman’s compilation offers insight into the plight of insects, how their decline impacts us, and what we can do to confront this crisis.