I Spy—with My Binocular Eye

The elusive Nelson’s sparrow has prompted many of the author’s recent trips to the Thompsons Beach marsh plain. 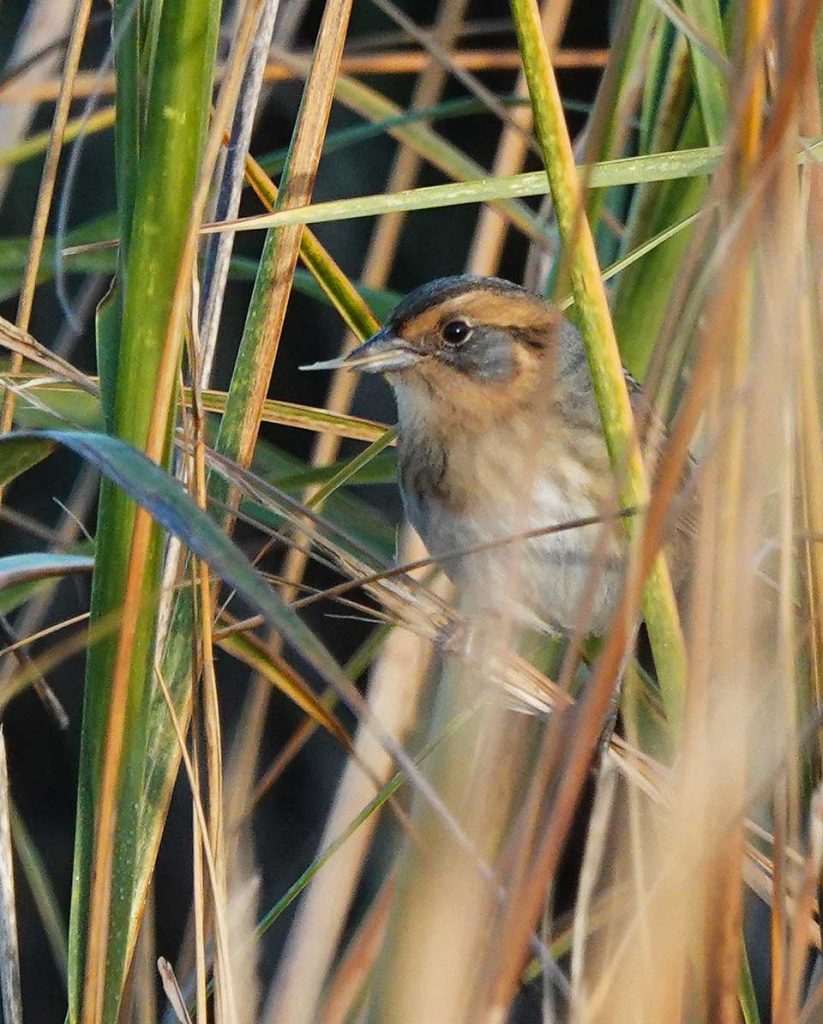 The Nelson’s sparrow winters on the Delaware Bayshore after having nested in New England, or further north in Canada’s Nova Scotia, New Brunswick, along the entrance to the Saint Lawrence River, or the shore of Saint James/Hudson Bay. This is the Atlantic Flyway cohort that will winter from southern New Jersey to Merritt Island National Wildlife Refuge in Florida. There is another cohort that nests in central Canada and migrates down the Mississippi Flyway corridor to the Gulf of Mexico, wintering along the Gulf shore from Corpus Christi Texas National Wildlife Refuges and north, to the Ding Darling National Wildlife Refuge in Sanibel, Florida.

This specificity tells us our southern New Jersey region is essentially the northern extent of their wintering range, allowing us to enjoy those that spend their vacation during the colder months on our vast marsh plains. So “vacation,” I suspect, is taking considerably too many liberties in describing a little creature’s wintering grounds, especially when it faces many year-round perils. But when compared to the responsibilities of nesting and migration, I’ll accept any wordsmithing fallout.

David Sibley makes distinctions between “interior” versus “Atlantic” plumages, although both are considered to be Nelson’s sparrows. Adding to the confusion for an amateur like myself is that prior to 1995, the Nelson’s and saltmarsh sparrow were viewed as a single species—the “sharp-tailed sparrow.” However the saltmarsh sparrow has some white on its throat and a more heavily streaked breast, and so it has now been determined that they are two separate species—not to be confused with interior and Atlantic, which denote plumage differences.

Like most migrants these birds are propelled by two primary functions—food availability and safe places to nest. During breeding season adults and their young rely primarily on insects.

Those that nest in New England, along the Saint Lawrence River, and around Nova Scotia are favoring cordgrass, saltmarsh rush, and saltwater shrubs during this period.

The birds nesting in central Canada are using prairie potholes, taiga swamp coniferous forests, sedgy bogs, and rush. These preferred marsh habitats offer grasses where the birds can be secretive and difficult to find, not only for predators but for birdwatchers too. As I relayed in my previous story, I was astonished by the numbers I flushed that were obscured by the Spartina alterniflora grasses. Along the mid-Atlantic coast they are known to congregate in feeding groups of two to 40 birds although groups of nearly 100 have been recorded (Shriver et al.). Yet during the breeding season sociability is nonexistent; they are dispersed and solitary after mating.

Three-quarters of the Nelson’s sparrow population breed in Canada. The female has the sole responsibility for brooding and care of the chicks. They nest only two to 10 inches above the saltmarsh among stalks of vegetation, in circular cups made of grasses. Sometimes they are perched on a plinth of thatch. They lay between two and six eggs, nesting for just a little over a week and incubating them for 10 to 14 days. Chicks fledge in eight to 11 days, but they may remain in association with the female for another two or three weeks. Occasionally these sparrows will raise a second brood. Their lifespan is estimated at six to 10 years.

In the fall and winter the Nelson’s sparrows make a major diet shift to seeds, and stay in the vast marshes that line the Atlantic and Gulf coastal plain. I have watched them busily stripping the shafts of cordgrass. Often you don’t see them but will notice the tops of grass blades shaking and swaying about wherever they exist.

They have good reason to be secretive. On the coastal marsh their known adult predators include northern harrier, short-eared owl, fish crow, Norway rat, and garter snakes. During nesting season the predator base is vastly increased to include herons, egrets, ibis, black racer snakes, fox, and mink. In nesting situations female parents will fly 30 to 50 feet from the nest when a predator is detected, and then make an alarm call to the unprotected chicks. When the predator leaves, she will sneak back hoping to avoid detection so as not to give away the nest’s location.

If you wish to see them, walks along the Delaware Bayshore near spartina marshes would be your best bet.

Identifying them in the marsh takes some patience and a bit of stillness doesn’t hurt. You’ll be looking for movement on their part, and slow motion on yours. In my opinion binoculars are a must. You’re seeking to identify a slender sparrow with a lot of streaked upper parts. Their sides and breasts are pale brown with pale streaks. From their throats to their bellies they are white with a hint of gray. When they bow their heads you can make out a gray crown and nape or stripe. For me their outstanding feature is their orange-brown face, cheeks, and bib. Many that I saw also had a thin dark stripe starting at the outer corner of the eye, getting progressively wider while curving slightly along the cheek. Males and females are too similar for me to distinguish between the sexes.

Listening very closely may help you find them. I heard very light whistles only, but they are known for a number of calls—a rather long raspy trill call (that I did not perceive except in recordings) and a sharp chip note or “tsik.” Mostly what I heard is described as a “seet.” For me it is a very short, quiet, lisping whistle of “ps-t.” The best way to find them is persistence.

No matter your success with Nelson’s, you’re almost certain to see and hear some neat creatures if you just wait and listen.