An Olde Fashioned Christmas on the Ave 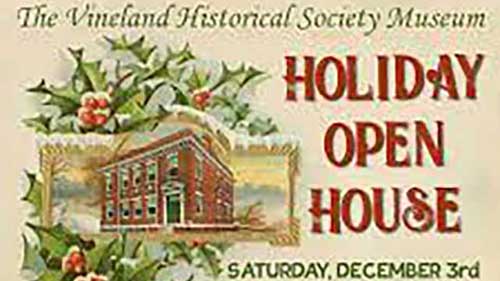 O! Christmas is a merry time,
When snow is white and sleigh bells chime,
When skater’s steel rings on the air,
With Christmas greetings everywhere;
But then, there can be little doubt
This Vineland you have heard about
Though lacking some in biting weather,
Can call a lively crowd together –
As many fair and smiling faces,
As good a touch of fashions graces,
As much of life and thought and jest
As riper places have possessed.
Before next Christmas comes around,
Vineland must be “the banner town,”
And when we count another year
E’en cities will lie in the rear.
Then in a fine and roomy Hall,
There’ll be another Christmas Ball.
While ‘mid attention from the crowd,
An Antiquarian reads aloud
Of our first public Christmas cheer
The Grand Reception given here.

It’s sometimes difficult to envision what Christmas may have been like in the earliest years of Vineland, or what constituted fun in the lives of our 19th-century counterparts or what a social gathering in a fairly new town during the years of the Civil War would be like. Thanks to a brief account credited to a “Mrs. Bridges,” preserved in the Vineland Historical Magazine, it’s possible to catch a slight glimpse of the Christmas season of yesteryear by examining a festive gathering that occurred during the close of the town’s third year of existence.

The occasion was a Christmas reception, the host the city’s founding father Charles K. Landis and the year 1863. Bridges renders a Dickensian scene replete with food, song, conversation and dance carried out by staid elderly participants, young energetic adults and wild hormonal teenagers whose sexual awakenings are hinted at in hushed Victorian style. The scene could just as easily belong to Austen or the Brontes.

Bridges begins by crediting the work of the six women who were selected to “make suitable arrangements for the Fete.” The work of this committee included preparing mince and plum puddings, writing invitations and creating the decorative wreaths and stars that would adorn the hall.

On Christmas evening in 1863, Bridges reports, 900 people filled the Landis residence, known at that time as the Magnolia House. With Landis as host and members of the Vineland Brass Band providing some of the musical entertainment, 700 guests enjoyed a supper in addition to the socializing.

Curiously, A.G. Warner in his Sketches, Incidents and History. Vineland and Vinelanders, writes that over 1,000 people attended the Christmas reception that year with only about 600 partaking of the supper.

Bridges identifies that some of those in attendance contributed to the evening by singing, such as a husband and wife who offered an unaccompanied performance of original lyrics set to the tune of “Hurrah for Old New England.” Another guest improvised and parodied sonnets by singing them for the appreciative audience.

Bridges also notes that in addition to paying respects to Landis and acquainting themselves with others, the group also gathered to “ascertain who was the prettiest girl” as well as to determine the smartest, most logical and most elegantly dressed, the best dancer, literary student and conversationalist and the funniest and wittiest individuals.

“Flying feet” filled the evening according to Bridges as the crowd danced the night away in what Warner reveals was the dining room of the Magnolia House. The guests enjoyed the final hours of the night in what must have been not only a celebration of the season, but an evening’s unburdening of the hard work and commitment necessary to bring a fledgling town the success it seeks. They may have also, for a few brief hours, forgotten about the nation’s war that raged on and maybe even their own fate on the wheel of fortune which starkly confronted the young settlement earlier in the year. In 1863, Vineland witnessed its first birth on January 16 when Willie C. Richardson entered the world. Two months later, on March 31, the town recorded its first death when Hezekiah Davis died of consumption.

Bridges’s account concludes with a poem commemorating the occasion rather effectively. That poem is reprinted at the beginning of this article. Through a series of rhyming couplets set to an iambic tetrameter cadence, the event is memorialized for the next year’s, as well as all future social festivities, to recall.

The above is a juxtaposition of a history column written by Vince Farinaccio for a November 2010 issue of The Grapevine.

Fast-forward to last year’s An Olde Fashioned Christmas on The Ave, and it harkens back to that Vineland Christmas reception of 1863. And if not an exact reproduction of the Victorian-style holiday in Vineland, the second annual event, set for this weekend, Friday and Saturday, December 2 and 3, at least takes a page from more recent memories of the coordinators.

Event chairperson Josephine Spinelli likes to point out that the event was inspired by a Christmas card scene not unlike some of the scenes described by “Mrs. Bridges” from the 1863 celebration. Spinelli sees An Olde Fashioned Christmas on The Ave as a golden opportunity for people to come together, as they did in the past, in the spirit of holiday joy and camaraderie.

“We have been working hard on planning this event to make it one that people will remember and tell their children and grandchildren that this is the way Christmas celebrations used to be,” she said. “It is the kind of celebration that adds to the special character and warmth of a downtown. We want everyone to come out, enjoy, and make this Christmas extra special.”

The two-day event, a throwback to Christmas times of old, is organized by Main Street Vineland, with major sponsorship by G.E. Mechanical. It will take place on Landis Avenue—from the 500 block to East Avenue—on Friday from 5 to 9 p.m. and Saturday from 11 a.m. to 7 p.m.

So get ready to turn the clock back to Christmas days of yesteryear with a weekend full of activities and holiday shopping. Enjoy live music, Yuletide characters and décor, food, carriage rides, fun with Santa Claus, and lots more.

The proceedings will kick off on Friday, December 2, with the lighting of the Vineland Christmas Tree and ribbon-cutting at City Hall, 740 E. Wood St., at 5 p.m., featuring CBS 3 Eyewitness News television personality Jim Donovan as well as the Vineland High School Select Choir under the direction of Lori Cummings. Mayor Anthony Fanucci invites the community to join in.

“Christmas has become so commercialized today that it is refreshing to take a step back to when times were simpler, the Yuletide experience was warmer and friendlier, and the spirit of the holiday filled the air,” said Main Street Vineland Executive Director Russell Swanson. “We are filling the weekend with that trip back in time.”

“This is also a great opportunity to make an extended visit to The Ave, take in the events we have in store for you and see all that our downtown has to offer to make your holiday celebration extra special,” said Main Street Vineland Associate Director Robert Scarpa.

“The event is also a chance to shop The Ave. You’ll help our local merchants and help yourself by getting some fine merchandise,” Swanson said. “We have merchants that have unique, locally made items that could be just the thing for that special holiday gift.”

“We’re also encouraging our other downtown merchants and restaurants to stay open during this event. It’s an opportunity to shop local,” Scarpa said.