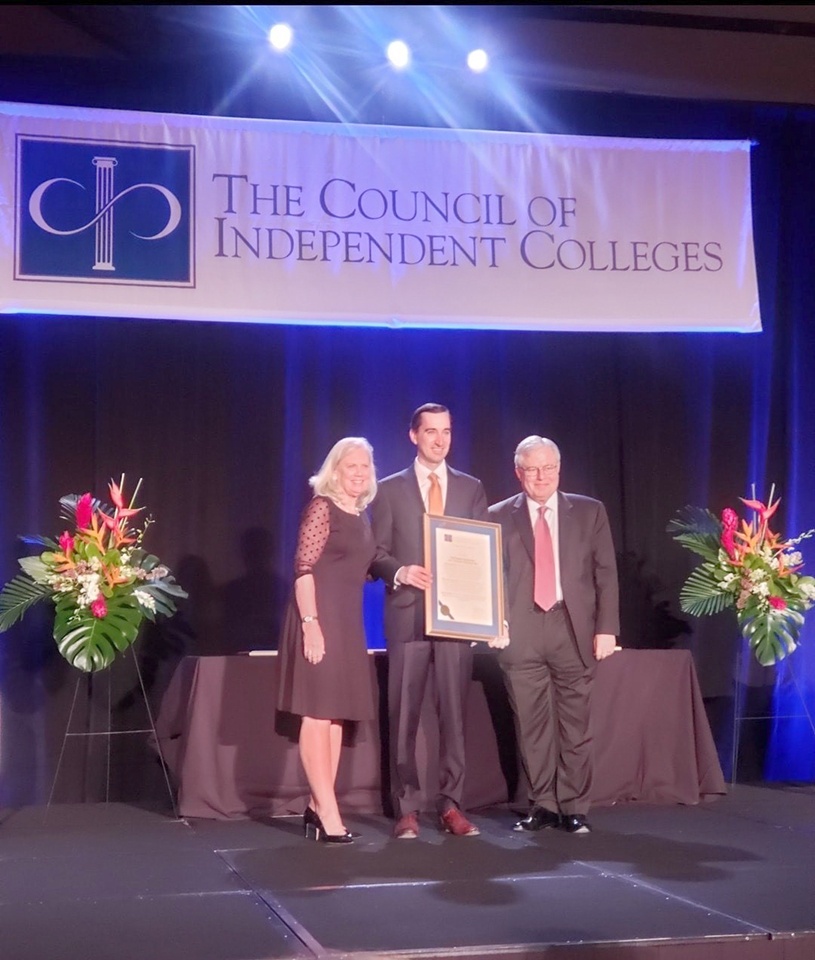 The Council of Independent Colleges (CIC) presented its three annual awards and one special award for outstanding service and noteworthy philanthropy at its January 6 annual awards banquet, held during the annual Presidents Institute in Marco Island, Florida.

The Raskob Foundation for Catholic Activities, Inc. earned the 2020 Award for Philanthropy (Organization). Accepting the award was Patrick McGrory, a Vineland financial advisor.

The Raskob foundation is an independent, private family foundation that has spanned five generations. McGrory is one of those family members. It has distributed more than $200 million in grants to Catholic organizations and programs throughout the world. Educational institutions are the primary recipients of the foundation’s generous support.

Mary Ann Baenninger, president of Drew University and chair of the CIC Board of Directors, presided over the awards ceremony. Roderick Smothers, president of Philander Smith College, helped present the evening’s awards.

In presenting the award, Smothers said, “the foundation supports a wide array of activities at a diverse set of CIC institutions. From tuition assistance for students in need, to sports and science equipment, to facilities upgrades, more than 20 CIC member institutions have benefited from grants from the Raskob Foundation.”

In accepting the award, McGrory gave a moving speech that describes the history of the Raskob Foundation. It is excerpted here:

“It is with immense gratitude that I accept on behalf of the Raskob Foundation for Catholic Activities, the 2020 CIC Award for Philanthropy. The Council of Independent Colleges is a spectacular association, and during our 75-year history, we have partnered, in one form or another, with over 100 of the current member colleges. We are honored to be recognized tonight, but we are more honored to accompany you on your journey of developing our future leaders. “The Raskob Foundation was founded in 1945 to aid the Roman Catholic Church, ultimately being funded with proceeds from the sale of the Empire State Building, which was conceived, commissioned, and owned by Raskob.

(In 1929, John J. Raskob, a financier, corporate executive and director of the DuPont Company, the General Motors Corporation, and the Bankers Trust Company, conceived of and commissioned the construction of the Empire State Building in New York City.)

“The past 75 years have served as a story of my great-grandparent’s dedication—to God, to each other, to their children, and to the Catholic Church. It is a story of their vision, of their acceptance of God’s plan for them, and a story of their legacy, as lived out by five generations, with 145 current family members volunteering—yes volunteers, from all walks of life, sitting around the same table, which breathes life into all that we do….

“There once was a boy in upstate New York, who was the grandson of immigrants from Germany and Ireland. He grew up in a middle-class home, and he had dreams of entering the business world one day. After high school, he attended business school, but he was forced to drop out, as he had to go to work as a secretary to support his family.

“There once was a girl, an orphan, whose mother died when she was three and a half years old. She was taken care of by her grandmother, until she too passed away. This girl was a warm and caring person, very sensitive to the feelings of others, aware of, and helpful to those in need.

“As young adults, these two met in a church in Wilmington, Delaware. They shared the same core values based on their experiences in their childhood—love of the Church, optimism for the future, family and faith, compassion and commitment to those in need, and innovation and partnership.

“John and Skipper Raskob would spend the rest of their lives living out these values—in their personal, business and philanthropic lives. Channeling John and Skipper’s wisdom tonight, they would challenge you with the following thoughts:

“The institutions that you lead are the past, present, and most importantly, the future of our communities, our nation…all of humanity. You have great accomplishments of the past, but you have a new tablet upon which to write your future.

“As the grandson of immigrants, and as an orphan, their first plea to you would be to ensure that your institutions are not only open to all, but accessible and affordable. Authentically encourage and assist those that may need it. It is often those on the margins that have the greatest potential, and when this potential is unleashed, the greatness achieved can be historic and lasting, as evidenced by us being here with you tonight….”

The Council of Independent Colleges (CIC) is an association of 765 nonprofit independent colleges and universities, state-based councils of independent colleges, and other higher education affiliates, that works to support college and university leadership, advance institutional excellence, and enhance public understanding of independent higher education’s contributions to society. Founded in 1956, CIC is headquartered at One Dupont Circle in Washington, DC. For more information, visit cic.edu.