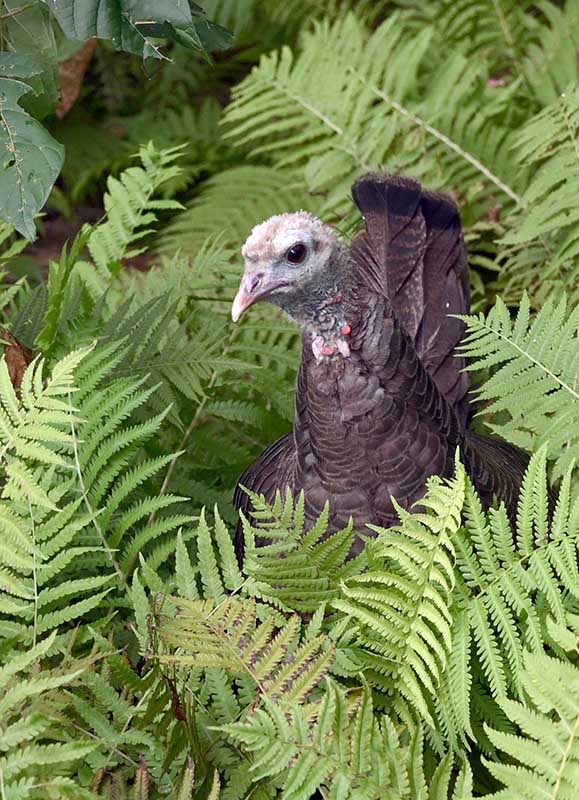 Turkey hen scowls at intruder and raises her tail in defense of her young.
by J. Morton Galetto, CU Maurice River

Some of our readers , I suspect, have been seeing hen turkeys lead their families through neighborhoods, so it seems like yet another time to—you guessed it —talk turkey.

Two years ago I relayed a story on these pages of a resident turkey that nested at our back door in a patch of rosemary, sage, and oregano. It was mid-August, so a late brood. Her patterned feathers and featherless head kept her well camouflaged and safely hidden. But the question remained: How did our three bird dogs not detect her, at least by scent?

Turkeys have many types of defenses. Some are passive like camouflage, others are tactical or aggressive, and still others use chemistry. First and foremost, the incubating hen bird remains motionless. Movement is one of the dead giveaways in nature; you stir and you’ve revealed your presence. Remaining still can be the difference between life and death. If you choose to move you better be fast. Even a cheetah, the world’s fastest land animal, will employ lack of motion to evade detection when hunting prey, first deftly stalking its quarry and then explosively attacking it.

The hen bird was never seen off her eggs, so being motionless also meant she wasn’t expending energy or burning valuable fat resources. But the most amazing thing was how three bird dogs passed by her, often within four feet, for nearly a month and never detected her scent. Our bird dogs’ olfactory capacities are often reliable at 50 or more feet with a light wind. With their noses, they can detect the difference between a live healthy bird, a dead bird, or a crippled bird. So what was going on?

In David Sibley’s newest book, What It’s Like to Be a Bird, I finally found the answer to the question that has plagued me for two years. Sibley acknowledges that while cryptic coloring is effective, “a major threat is predators hunting by smell.” He goes on to explain that ground-nesting birds change the chemistry of their preening oil “during the nesting season to a different chemical compound with no odor.” This is why our diligent mother went undetected by our dogs. Eureka!

Beyond having feathers that blend into natural backgrounds, ground-nesting birds’ eggs look much like the ground they are laid upon. Beach nesting bird eggs resemble sand, turkey eggs are blotched with earthen colors. These are passive camouflage strategies at their finest.

Each morning my husband and I go on a walk. The first leg is along a road adjacent to wooded property. We have been seeing a bearded hen with 18 chicks in our yard, and other broods, too. In the second week of June a hen bird was making incessant “putts,” a turkey’s alarm call. Not soft little putts emitted in a whisper but very loud continual putts. “Something’s not right,” I remarked. “She is going bonkers, signaling distress. There must be a fox after her poults.” Just then a red fox came running across the street with a mother hen in fast pursuit. There was nothing passive about this mother; she meant business. The fox clearly understood.

I was home two years ago when our hen’s brood hatched so I was playing paparazzi. However, the hen finally made it abundantly clear that she wasn’t putting up with my photo sessions any longer. When I advanced she advanced and stood tall, raised her tail, opened her wings slightly to increase her perceived size and yes—frowned at me with a take-no-prisoners look. It was clear to me she meant to protect her chicks from me and my invading lens. 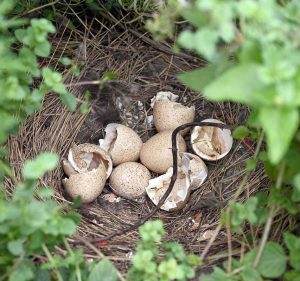 These birds have a complex vocabulary when talking turkey, and many hunters know how to decipher it. They “cluck” to reassemble flocks that have been flushed. “Yelping” is often a signal from a lonesome hen, one of the most frequently employed calls of turkey hunters. They “gobble” on roosts to attract females and define territories. “Purrs” are used in various ways and the volume often is telling. Loud rapid “purrs” signal aggression and soft “purrs” are just a way for members of the flock to communicate their position so they can travel together in cover where they don’t always have eye contact or are more focused on ground feeding.

Let’s talk about strategies. If you advance on a hen with her brood of turkeys she will often zigzag behind them retreating into the forest, while the chicks advance in a serpentine pattern ahead of her. This is intended to lure you away from her young. Since she is much easier to track, and their size makes them harder to see, you lose sight of them as you are drawn to her. Then if she chooses, she can dash off, speeding through the woods at as much as 20 miles an hour, and you lose her as well—wallaaaah, magic trick pulled off.

Two other well-known strategies are utilized by two different ground-nesting species. The killdeer feigns a broken wing, thus leading would-be predators away from its nest. Wood duck mothers tumble along stream and pond banks in low brush, looking as if they have a broken wing and leg. They do this so rapidly that you are startled and drawn to paying attention to them, missing their ducklings entirely.

I recently watched a video where a hen turkey was crossing an open road with her poults. She tilted her head and looked skyward where she perceived a predator. Whispering putts, she almost purred to her dozen tennis-ball-sized little ones. They quickly dove into the tall unmown grass at the base of a roadside mailbox, where not a blade then stirred. By staying motionless they escaped detection.

I have also noticed two hens combining their broods—two sentries being better than one. More watchful eyes allow one adult to be aggressive while the other guards the flock. Additionally, by combining broods there are more small ones scrambling about, making it more difficult to pick one out of a flock. And lastly there is always the principle embodied by the joke of the man who runs from a bear. His companion says, “What are you doing? You can’t outrun a bear.” To which his friend replies, “I know, I only have to outrun you!” These concepts prove to be true; there is safety in numbers and only the strong (or swift, or smart) survive.

For birds the ultimate defense mechanism is flight. On yet another of our jaunts I saw young turkeys fly not so gracefully but high enough to alight on the branch of a tree about 10 feet up, surely out of many predators’ grasps. When four weeks of age they are about the size of a quail and can attain heights of 25 to 50 feet to roost with their mother. It takes them a few minutes to line up on a branch on either side of her and then she stretches out her wings and covers them up, illustrating the adage “taking someone under your wing.” For young turkeys that’s a cozy and a safe place to be!