Another kid from Cumberland County is off and running the Major League bases. 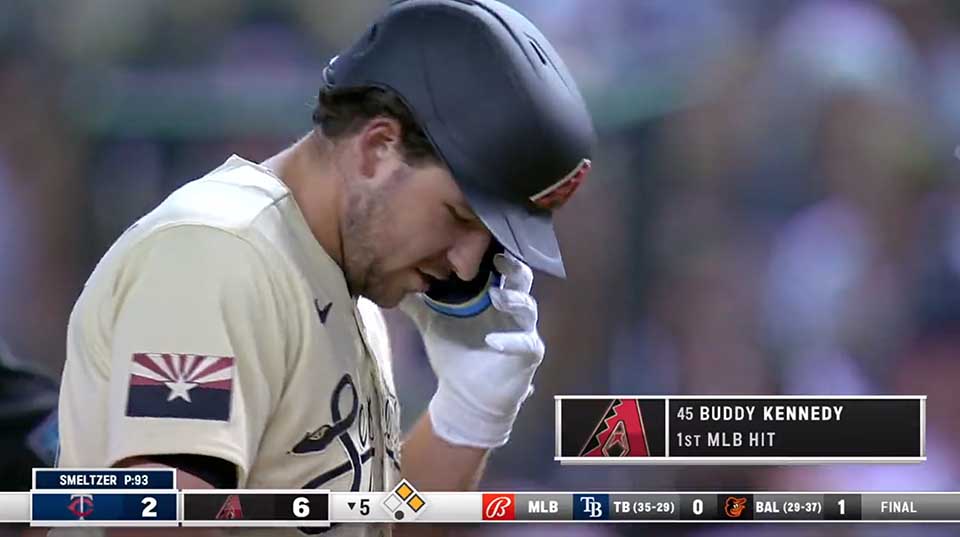 “Put the ball in play and have fun.”

These eight words, consistently repeated by grandfather to grandson for many years suddenly took on critical importance Wednesday, June 15 as minor league baseball player Buddy Kennedy, the grandson, called former major league star Don Money in the middle of the night to say, ”Pop-Pop, they’re sending me up, I’m going to the majors tomorrow. You need a plane ticket for Friday’s game.”

With tears in his eyes, the grandfather asked, “You know what to do, right?”

“Put the ball in play and have fun,” the grandson answered.

“I’m proud we have two major leaguers in the family now,” added Pop-Pop.

Clifton “Bud” and Shannon Kennedy had gotten the same call from their son (whose given name is Clifton Kennedy Jr.) and needed tickets, too. Everyone had to get to Chase Field in Phoenix to see Buddy wear a major league Arizona Diamondbacks uniform for the first time. Other family members and well wishers joined them, all hoping Buddy would have a good game.

He did have a good game and on his third trip to the plate he did what he’d never do again—get his first major league hit. And his dad was given a ball he’d never get again—the one his son hit.

The day was intense. Kennedy was more nervous than he’d ever been on the field. His grandfather had told him to just get that first at bat out of the way and he’d be settled and could just play the game.

“Once I was walking up to the plate and heard my name announced, it was like ‘Alright, let’s get through this one and it will be alright,’ ” Kennedy told mlb.com following the game. “So. I got through that one, got out and right after I sat back down on the bench I was like ‘This is baseball. This is good, it’s all good.’ And from there out, I had a solid mindset.”

As it could be written in a TV script, in the fifth inning, at the moment that Kennedy got that first hit, Money was being interviewed live on the team’s telecast.

But all that was merely prelude. In episode two of our pretend TV series, it’s two days later and Father’s Day. Money and his wife Sharon are walking on the concourse buying team gear. There’s a clear view of the field. Money notes the Diamondbacks are rallying in the sixth. He sees runners on first and second with two outs and their grandson on deck.

Wait, he tells Sharon, if this hitter gets on, Buddy will be up with the bases loaded.

He did get up with the bases loaded and, with the count 3-0, crushed one to deep left—his first major league home run was a grand slam, which broke the close game wide open.

After the game, Bally Sports interviewed Buddy and Bud for Father’s Day.

“Everything happens for a reason, I feel super blessed and happy I’m just here to do everything I can to put a W on the board for the team,” said the son.

“You know all that time when your friends were taking it easy, you were playing baseball all over the country and that got you to where you are today. Keep grinding, my man, I love you,” said the father.

Much later, Kennedy scrolled through hundreds of texts. An important one was from Mike Trout. You know, that other big leaguer from Millville. The 2009 high school graduate and three-time American League MVP. Buddy’s good friend, an off-season workout partner at Trout’s professional home gym and breakfast companion at Flight Line restaurant. At the end of the pretend episode, we learn Trout also smacked a homer that day..

T: That never happened before lol. Just enjoy it, play hard and keep having fun

K: That’s what my granddad always tells me

In his 16-year major league career, well-known Vineland resident Money played 1,720 games for the Phillies and Milwaukee Brewers, appeared in four All-Star games, and was one of the best fielding third basemen of his era. He also had a long career as a minor league manager. In keeping with the charm of this story, “Pop-Pop” also got his first big league hit in his third at-bat.

“I’m relieved with Buddy coming up and being able to get his feet wet,” Money said. “Buddy, I told him, it’s still a baseball game, even at this level, you grind it out, and believe deep down that you belong here.”

Just as it is for all “call-ups,” though, how long Kennedy will get to put the ball in play and have fun at the big league level is unpredictable.

Starting out as a major league player—no matter how good you are—comes with opportunities, but without promises. The minor leagues are littered with players, some with great skills, who never quite get to “The Show” and others who get there only to be edged out of a position by a returning veteran, suffer an unfortunate injury, or simply don’t play as well as expected and have to go back and grind harder to climb the crowded ladder again.

With the four-day lag in publication of SNJ Today, it’s possible one of these events has already happened to Kennedy. He was added to the roster the day Ketel Marte, the team’s leading hitter in average, suffered a hamstring injury. While the Diamondbacks play it safe with Marte—he’s served as the designated hitter since the injury—Kennedy has become the primary second baseman.

If he has returned to the minors by the time you read this, that just makes the story one about why many think he’ll be coming back up.

“Buddy is a humble kid with an awesome work ethic,” said Millville High athletic director Dave LaGamba. “He’s going to continue to do everything he needs to do, he’ll work his tail off.

“I’ve been talking to him, he’s enjoying the moment, and he has the mental strength to get through the grind,” LaGamba added.

Former longtime baseball head coach Roy Hallenbeck saw the ability to grind and the mental strength early when he put the freshman Kennedy at varsity shortstop. At that point the youngster was not yet viewed as a phenom like Trout had been.

“We saw his athleticism right away,” Hallenbeck said. “We didn’t know he’d be like this, but we knew he was special.”

By his senior year, he hit .423 with six home runs and was selected All-State.

Retired legend Tony Surace stays up almost every night to watch his hometown hero Mike Trout play on the west coast while he follows the end of his cherished Yankees games. Now, he’s added a third screen to watch Buddy.

“I hope he can string his hits together,” Surace said, “He’s been robbed by great plays on a couple hard line drives and grounders.

“He works so hard all the time; it’s so great to have two kids from Millville now.”

If Marte returns to full duty, there are possible moves that could keep Kennedy in the lineup, especially because he has a quick bat, good speed, and can play several positions.

Plus, he’s a grinder.

In 2017, Buddy Kennedy was picked in the fifth round, the 142nd overall prospect in the country chosen and he signed with the Diamondbacks.

Last year, he had a tremendous minor-league season playing for the high-Single A Hillsboro Hops and Double-A Amarillo Sod Poodles. He hit .290 with 11 doubles, two triples, a career high 22 homers and 60 RBIs. He slugged .523 and had an on base plus slugging percentage (OPS) of .907.

After the season, he was picked for the elite Arizona Fall League where he played in 16 games for the Salt River Rafters. He hit .236 (13 for 55) with two doubles, two homers, 10 runs, seven RBIs, and won a Player of the Week award.

Second Friday at the Bayshore