Rising Waters of the Bayshore: Recollections 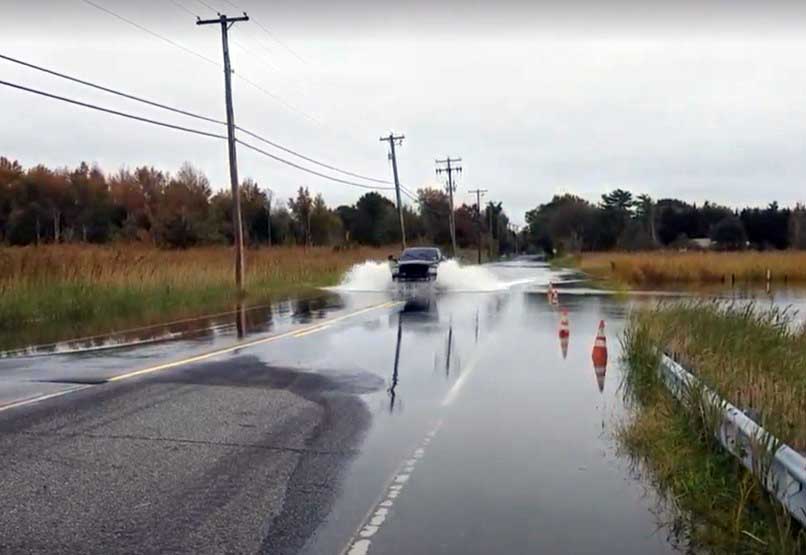 Motorists in the Bayshore region are more often faced with flooded roads due to the increasingly frequent high tides.

My wife and I moved to Port Norris, Cumberland County, in the summer of 1990. I had grown up on the Atlantic coast in Ocean City and was barely aware of New Jersey’s “Forgotten Coast,” the Delaware Bayshore region. However, I was instinctively drawn to the amazing natural wonders to be found all along the edge of the bay. I spent many of those early days wandering the roads and paths that took us into the marshes and out to the bay. Some of my first explorations were at the glades in Dividing Creek. Walking down what we now refer to as the Eagle Trail off Turkey Point Road, I recall the fairly thick belt of woodlands that extended all the way to where the trail turned and led out to The Old Farm and the marsh overlooking Beaver Dam. The area was rich with holly, tall pines, sweetgum, and swamp maple where we would regularly encounter owls, woodpeckers, many types of songbirds, and in those days, if we were lucky, a bald eagle.

Another of my favorite early explorations was the Natural Lands’ Tat Starr Trail on Fortescue Road. That was another path where you could be walking through dense woods practically all the way out to the end and then cross an open area onto the marsh. Then the trail would plunge back into another wooded hummock, teeming with songbirds and finally open up to an observation platform. Those wooded hummocks provided safe roosts for barn and long-eared owls, but over the years tree after tree, one after the other, succumbed to the rising saltwater from the surrounding marshes. The skeletal trunks and branches of many of those trees still stand as a forlorn reminder of what once used to be.

According to research compiled by Rutgers University, global sea-level has risen approximately eight inches since 1900; however, in New Jersey, sea level rise has increased by almost one and a half feet over that same time frame. Several factors are at play here. Obviously, the warming of the planet is causing the warmer ocean water to expand and take up more space; that’s basic physics. This thermal expansion, along with the accelerating melting of Earth’s glaciers and ice caps, accounts for approximately 85 percent of sea level rise globally.

Simultaneously, the land in the Mid-Atlantic region of the United States, including southern New Jersey, is actually sinking. This “glacial isostatic adjustment” is a remnant of the last ice age that ended 10,000 years ago, a mere blink of an eye geologically speaking. As the massive ice sheets in the northern part of our region melted, the land there started to spring back, which created a seesaw effect that resulting in our part of the state sinking—a process referred to as land subsidence.

Another significant factor is regional development and the extensive use of underground water supplies to support agricultural, industrial, and residential growth. The removal of water from the aquifers at rates exceeding replenishment has also caused the land to sink, contributing to saltwater intrusion.

For millennia, coastal habitats along barrier islands and marshes have migrated inland in the face of land subsidence and rising waters. Today this natural progression is impeded by development.

According to Rutgers with respect to elevation, approximately 600,000 New Jerseyans are living within 10 feet of the high tide level, and sea level rise has increased the frequency of minor and major tidal flooding in shore communities to more than 20 times its normal rate. It is projected that over the first half of this century, the Jersey Shore is likely to experience from one foot to two feet of sea level rise—a costly and increasingly disruptive new reality. In addition, keep in mind the increasing frequency of severe coastal flooding caused by more powerful ocean storms.

There have been some very real and observable consequences to this situation. Those of us who spend time on the coastal marshes now often encounter super high tides coinciding more regularly with the full and new moons. Roads out to the marsh are regularly covered with flowing water at a frequency never seen before.

As a result of these inundations, there has been a steep decline in the number of marsh rodents like meadow voles and rice rats. These rodents serve as the overwhelming majority of food for raptors on the marsh. Consequently the number of northern harriers, short-eared owls, rough-legged hawks, and even red-tailed hawks has drastically decreased over the same time interval.

I have been participating in a winter raptor survey with my friend Janet at Newport for almost 15 years and the numbers are declining. Where once we would count more than a dozen harriers and close to the same number of short-eared owls, now just a remnant raptor or two remains. Barn owls have practically disappeared from the region over the past decade and a half, their roosts flooded and their prey animals drowned.

The marsh is transitioning in ways we have not seen before. One of the habitats in the steepest decline is the Spartina patens “high marsh,” challenged with invading non-native Phragmites on one side and with inundation on the other. Saltmarsh sparrow, rails, and the other species that depend on this marsh are being forced out as their nests are drowned by higher water levels.

Even our flagship species of the Delaware Bay—the horseshoe crab—and the shorebirds that rely on their spawning are facing the same challenges as the living shorelines and beaches that serve as the marsh/water interface are increasingly breached by rising tides and storms.

Many of us know people in our region who have been forced to leave their homes due to frequent flooding, thus creating true climate refugees. In 1995, the New Jersey Department of Environmental Protection instituted its Blue Acres Program that according to its website, “[h]as worked to better protect public safety and the environment by relocating New Jersey families whose homes are subject to repeated flooding and acquiring [this] property for use as natural flood storage, parks, and community open space.”

Books have been written about the challenges faced by residents of Thompson’s and Moore’s beaches and Money Island. Even our iconic East Point Lighthouse is under severe threat and faces the real possibility of destruction. As a result, in places where shorelines cannot be protected by fortification even for a while, many more property owners may have no choice but to retreat from the more vulnerable spots.

People new to the region will not have seen the enormous changes that I have witnessed over 30 years, and the huge impacts on habitats and personal properties that these changes have wrought.

Certainly, one of the constants of life on Earth is change. However, perhaps we need to take a closer and more honest look at the changes for which we are responsible and decide if they are what we want to leave behind us for the future.