The off-season is on at the Jersey Shore. Now that the tourists have gone home, it’s our time to explore and enjoy. part 2 of 3 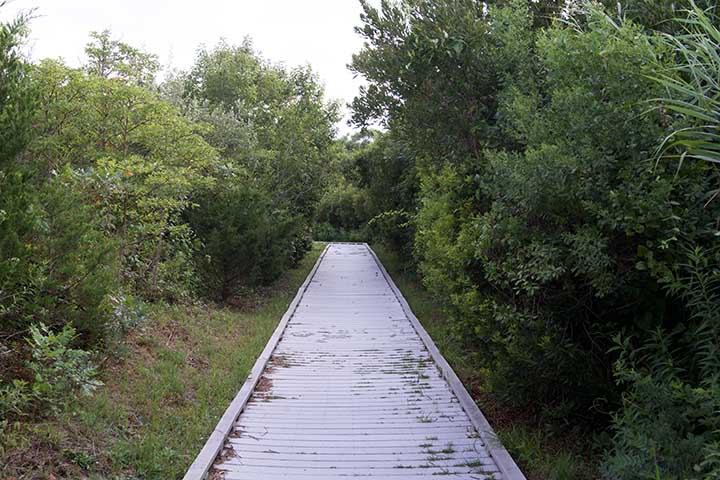 At Two Mile Beach Refuge trails that have raised boardwalks such as this allow visitors to keep their feet dry and minimize exposure to ticks and chiggers.
by J. Morton Galetto (collaborator C. Brown), CU Maurice River
Photography by J. Morton Galetto

Last week our seaside venture down New Jersey’s coast ended at Hereford Inlet Lighthouse. This episode’s narrative begins at Cape May National Wildlife Refuge’s Two Mile Beach Unit on Ocean Drive, in Wildwood Crest; afterwards we’ll head south of the Cape May Canal to give you a few select natural locations to check out. Once again these snippets are intended to whet your appetite and are in no way inclusive, so pack your binoculars, a nature book or two, maybe some bug repellent, don a few layers, and head to our sandy coast.

Cape May National Wildlife Refuge’s Two Mile Beach Unit is 507 acres of maritime habitat including beachfront, sand dunes, tidal marsh, and forest. During spring and summer the beachfront is closed to protect beach nesting birds. Each year it reopens by September 30. Once threatened by proposed development, this site was added to the CMNWR properties in 1999, when the U.S. Coast Guard finally transferred the property to the U.S. Fish and Wildlife Service.

From August through November migrating songbirds will make use of forested habitats. Raptors and seabirds fly the site and the oceanfront. In winter the beachfront and its jetty afford opportunities to scan for wintering ducks, loons, cormorants, and scoter. The boardwalk trail that leads to an observation blind is a good choice for a short hike as we go into chigger season. This is a good spot to photograph marsh birds. Interpretation on-site explains why wetlands are considered one of the most productive ecosystems in the world, providing benefits to wildlife, plants, and people. We will return to those aspects as our travels unfold.

We continue down Ocean Drive, crossing Jarvis Sound and Bennet Creek, skirting Cape May Harbor, and ending on Route 109 or Lafayette Street.

Before we cross the Shellenger Creek Bridge there are charter boat opportunities. Captain Bob Lubberman’s pontoon boat The Osprey is docked at the end of 2nd Street, with a skilled naturalist on board to help cruisers explore Cape May Harbor and Jarvis Sound’s marsh wildlife.

If you’re interested in whales and dolphins, charters to spot them are available just off Lafayette Street, running out of Cape May Harbor. Most boats run two trips a day until the end of October.

Now we’ll continue to loop around the harbor to end up at our next destination. The Nature Center of Cape May on 1600 Delaware Avenue is an example of a great partnership between a city and an environmentally dedicated nonprofit organization. The City provides the building and since 1995 N.J. Audubon has run the center, offering a full schedule of natural history programs throughout the year that utilize local habitats. The Center’s upstairs is used by naturalists to host children’s programming. There’s a three-story observation tower connected to the building with views of Cape May Harbor, along with classrooms, garden interpretation, and a gift shop. Families can explore nature books for children and adults. Monthly, the staff features a local artist in a show. These events bring other natural perspectives to the Center and raise awareness for new groups of people.

Outside the center is a native plant interpretative garden that attracts birds and butterflies.

Northern breeding birds tend to fly east and then migrate south during fall migration—along New Jersey’s coast. Think of New Jersey as a geological funnel narrowing at Cape May Point and the Delaware Bay. This migratory path is called the Atlantic Flyway, an expressway for birds.

Migrants are somewhat reluctant to cross large bodies of water. Just north of Cape May Point a bay crossing can be up to 25 miles, but from the Point to Cape Henlopen, Delaware, the distance is halved. Birds tend to hole up on the Point awaiting favorable winds and weather to make the shorter crossing, thus concentrating their numbers south of the canal. But you will learn that they are not our only migrants.

Birds use different strategies to cross. Some, especially hawk species, will fly high in a kettle, an aerial silo of sorts that makes use of thermals to gain height. Then they simply soar across versus expending energy flapping. Some species will traverse enmass at night when winds are light, allowing them to utilize drafting similar to that used by racing cyclists. Whatever their crossing strategy, food and rest in coastal habitats at the Point give them the necessary energy to continue on their journey.

This is what makes the locations discussed in this narrative a mecca of sorts for wildlife enthusiasts. When do you want to visit? Pettigrew and Mallman in NJ’s Viewing Guide put it like this, “[T]he fall migration is downright phenomenal; summer and winter are merely excellent. Spring migration can begin as early as mid-February and fall migration can begin in August.” This year fall seems to be arriving early. “So when?” you ask. Well, now through November.

We will stick with our southerly movement, heading back to Lafayette Street from the Nature Center and traveling south three miles to W. Perry/Sunset Blvd., 692 Sunset Blvd., to see the 200-acre South Cape May Meadows, one of the Nature Conservancy’s flagship preserves. This site is the result of a very complex restoration project that offers visitors excellent trails across both marsh and beachfront.

Endangered piping plovers have commonly used the site during nesting season. In the watery impoundments be sure to scan the edges carefully; many herons and waterfowl are masters of camouflage. Water levels can be controlled here depending upon seasonal species usage. This is one of the Nature Conservancy’s most popular preserves and offers a large loop path and observation tower to get a better view of the impoundments. There is a small interpretation of a living roof, plus display boards to orient visitors to the wildlife that they might observe and in what habitats they may be found. Some likely species include osprey, kestrels, and other hawks; Baltimore orioles; kingfishers; Carolina wrens; egrets; terns; waterfowl; killdeer; and American oystercatchers.

Next week we will begin our travels at the Cape May Point State Park, considered by biologists to be one of New Jersey’s five premier coastal sites for viewing wildlife. n

For any of the suggested locations, check websites for fall and winter hours. You may wish to call in advance to verify.