Landmarks in Cumberland County and region tell the story of Black history and emancipation. 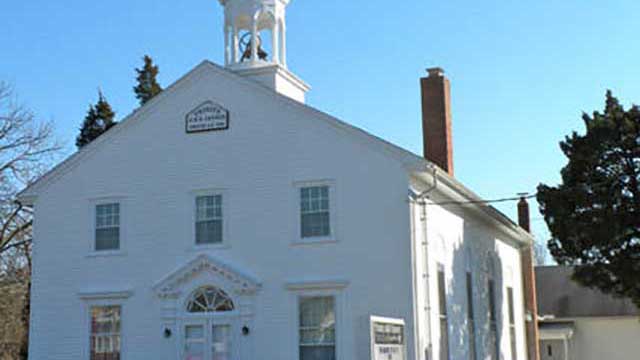 Bethel Othello AME Church in Greenwich is documented as a stop on the Underground Railroad.
by L.M. Jarvis
Photography by J.M. Galetto It’s what you don’t know about history that just might surprise you. Bounty hunters who rode through Bridgeton, looking for escaped slaves. The first African American woman to run for president, Shirley Chisholm, and her ties to a house in Newtonville, Buena Vista Township. A piece of land from the king of England that started a Cumberland County community that thrives today. A church in Cumberland County that is documented as a stop on the Underground Railroad.

Local historian Ralph Hunter and other members of a special state committee have more than a few stories up their sleeves. When they are done, you can ride around the state and take in the big picture of New Jersey’s African American history.

Gov. Phil Murphy this month signed into law a bill to create a Black Heritage Trail throughout the state. The bipartisan bill is the brainchild of District 1 Assemblyman Antwan McClellan, the district’s first African American lawmaker in the General Assembly.

McClellan’s project is a way to boost tourism and put together the bits and pieces of a story that starts in Cape May and spreads north, reaching into Atlantic, Cumberland and Salem counties as well as landmarks in Bergen and Sussex counties.

“This trail will highlight Black abolitionists, veterans, artists, entertainers and other leaders who have made their indelible marks on New Jersey’s history and deserve to be recognized and celebrated, not just during one month out of the year …” McClellan said in a prepared release.

Big story, but that’s where historians like Hunter and others come in. For the past 20 or so years, Hunter has served as founder and president of the African American Heritage Museum of Southern New Jersey, and is dedicated to adding South Jersey’s rich Black history to the trail. The $1 million set aside by lawmakers will help pay for the historical markers set up at each location.

“The trail is extremely important, especially at a time like this,” said Hunter, curator at the museum’s two locations—661 Jackson Road in Newtonville and 2200 Fairmount Avenue in Atlantic City. Hunter is one of the experts whose name has been submitted but not finalized to join the committee tasked with assembling the trail.

Hunter said his passion is to include key landmarks from South Jersey, where he has served to educate people for a generation.

“It’s important that people know that these locations exist while they’re traveling through southern New Jersey,” he said.

Hunter thinks it’s long past time that South Jersey’s Black history stories were told, as they are at his museums. “In total honesty, I feel like [South Jersey] has been ignored and I’m delighted that they put this package together,” Hunter said.

With one of his two museums located in Atlantic City, he said he would place a historical marker on Missouri Avenue beach, more commonly known by a name that Hunter will not deign to use because of its racially insensitive nature.

“Beaches in Atlantic City were not segregated, but became segregated in 1927, when hotel owners met with city officials,” he said. At that meeting, the beachfront hotel owners told the city’s politicians that they could not tolerate Black residents enjoying the beaches in front of their properties.

“Black people on the beach and in the sand. If you don’t get rid of that problem, the tourists won’t come back,” they told the city. The only spot where Black residents could enjoy the beach was in front of the Atlantic City Convention Center, which was in front of Missouri Avenue. Martin Luther King Jr., Sammy Davis Jr., Count Basie, World Champion boxer Joe Lewis and musician Louis Armstrong frequented the beach when they were in town. It’s a situation that continued through the 1930s—and until the Civil Rights Act of 1964 passed.

“Gouldtown is a very historic town,” Hunter noted, naming Trinity and a nearby cemetery, where Black Civil War veterans are buried. In fact, some of the men in the town sought to establish a regiment of Black soldiers, but the proposal was rejected by the government. Undaunted, some of the light-skinned residents of Gouldtown signed up as white soldiers.

Gouldtown is one of the nation’s first multiracial communities, dating back hundreds of years. And it all started with an interracial marriage, he said.

The town’s history began when an English nobleman, John Fenwick, bought the land from the king of England. But the town gets its name when a Black man with the last name of Gould married a white woman, Elizabeth Fenwick, the granddaughter of the nobleman. It was their son, Benjamin, who married a Finnish woman and founded Gouldtown. All their children were born with a light skin color, which became a requirement to live in the town.

“To be a resident [of Gouldtown], you had to be light skinned, not dark skinned,” he said. The town grew larger but the skin color rule remained. Somewhere around the turn of the century, a resident of the town married outside of the community to a person with darker skin. Their children’s skin color would be darker, forcing them to move outside of Gouldtown, just down to road to Millville.

“Those were the rules of Gouldtown. It happened to a friend of mine’s grandmother,” Hunter said. Gouldtown is among the country’s oldest Black settlements, established by free, land-owning African Americans.

Trinity AME Church in Gouldtown began in 1818 when an unused schoolhouse was converted into a church. Later, a second schoolhouse was moved to the current site. The current church dates to 1860, built on the eve of the Civil War. It was added to the National Register of Historic Places in 1995.

Bridgeton and Newtonville: Hunter tells the story of a local resident with the last name Buck who operated a safe house in Bridgeton for escaped slaves. The slave, hoping to avoid bounty hunters roving throughout the city, stayed in what now is known as the Buck House. The escaped slave stayed in the home for some time, then escaped with the help of the Buck family, who helped them avoid the bounty hunters by dressing him up in Buck’s own clothes and leading him to safety.

Another important South Jersey location for Black history is Newtonville, the location of the other of Hunter’s museums. Newtonville has been an established Black community for about 125 years. Residents from Camden and Philadelphia moved there to buy land away from the city.

“It was the precursor of the suburbs for African Americans. When white folks were moving to Bucks County or the greater northeast, this is what [Black residents] did, they moved to buy property in Newtonville,” he said.

They established churches, many of which remain to this day. Newtonville still has nine active churches, he said.Philadelphia’s industrial revolution caused a lot of people of color to move to the town. Some would work at nearby charcoal fields in Buena Vista Township, which were used to fuel the smelting mills, Hunter said.

Residents of the town may have worked at places such as the Camden shipyard or Campbell Soup Co., using their pay to save up to buy a few acres of land. “They were done with rowhouses. And if you own land, you’re king,” he said.

Years later, Newtonville would be the location of some famed Negro League baseball games, as well as a home for Shirley Chisholm, who, in 1972, became the first woman of color to run for president of the United States. She purchased a home in Newtonville during the 1960s, but it no longer remains, he said.

The legacy of Springtown: In Greenwich, Cumberland County, there’s a part of town known as Springtown. Residents established a church there, today known as Bethel Othello AME Church, which historians and experts say is a documented stop on the Underground Railroad. The Underground Railroad was a network of safe houses and buildings that slaves followed to freedom in the North. The town was established by slaves who had been freed or escaped.

Some documents exist to suggest the church was used by Moses herself, Harriet Tubman, during her journeys to rescue enslaved people. Today, the church membership is tiny, but the history behind the church looms large. An effort by the existing church members is underway to make badly needed repairs, according to Robin Winrow Henry, a member of Bethel Othello and organizer of the upcoming Springtown Homecoming Festival.

“As I speak to different people from this area, a lot of people don’t realize this church is out there,” Henry said. She hopes to change that by introducing visitors to its place in history.

The original church was burned by arsonists, she said, adding that the current church dates to 1838. Rumor has it the current church has a trap door hidden beneath the altar that was used by escaped slaves, but that won’t be known for sure until repairs can be made, Henry said.

A Freedom tour exploring the legacy of the Underground Railroad in western Cumberland County will be held from 1 to 4 p.m. on Saturday, November 5. The bus will leave from locations in Bridgeton and Vineland.

The tour is dedicated to spurring community investigations, inter-racial dialogue, emotional learning and historic preservation of sites related to the legacy of the Underground Railroad along the Delaware Bayshore. Developed by Lisa Stewart Garrison, working closely with church groups, academics, government entities and educational organizations, it incorporates storytelling and song, allowing people of all backgrounds to examine the roots of mixed-race settlement in Cumberland County.

The two pick up locations are:

To register for a seat (deadline for is October 31) , e-mail your name, phone number and pickup location to cceafreedomtour@gmail.com.

The festival will be held from on Saturday, September 24 from 10:30 a.m. to 6 p.m. at Bethel Othello African Methodist Episcopal Church, 1092 Sheppard’s Mill Road, Greenwich.

Enjoy a two-hour tour of the path of the Underground Railroad at 4 p.m. for $20 per person. The festival will also include a skit, gospel music from the Allen and Allen Choir, food and beverages and more. A book on the history of Springtown will be sold for $25. All proceeds from the festival will be used for making church repairs, according to Robin Winrow Henry.

Tour-goers will be taken to the Delaware Bay, where escaped slaves would travel to reach the area. Also on the tour—the circa 1818 Ambury Hill Cemetery, which has some of the original residents who built the church before the existing one was erected. It is also the burial location of two of the conductors of Springtown’s Underground Railroad, Alges and Julia Stanford, as well as former slaves.