Stalking the marshes, our columnist finds a peculiar form on some cattails. 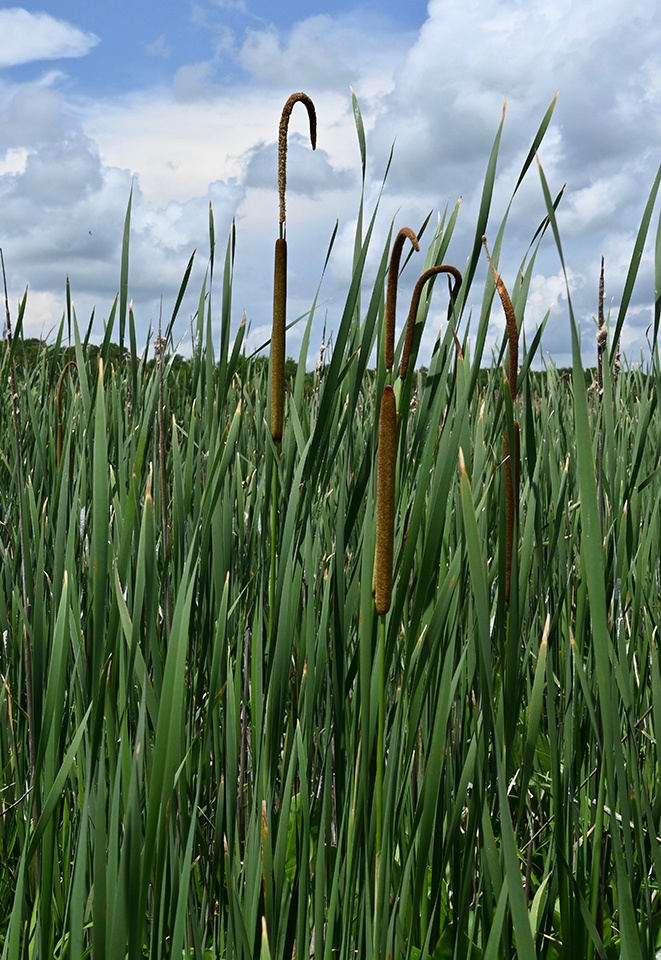 Likely a hybrid of narrowleaf Typha angustifolia, with separation between the male flower and the female beneath.
by J. Morton Galetto, CU Maurice River

During the last week of June we went out to investigate the osprey platforms, expecting to band some chicks. All but two of the babies in the 30 to 40-some nests were too young. Apparently the nesting began a bit late this year, maybe because of the cool spring or lack of herring. Coming off the bow of the boat, my husband Peter pointed out some unusual looking cattails—Typha. They looked like shepherds’ crooks, bent over on top. “Hmmm I’m clueless,” I said. “I’ve never noticed that before.” So I sent photos and a note to the head of the USDA National Plant Data Team, Gerry Moore, who is, yes, a Millville native! He seemed curious as well.

Time for some research. I was really excited about writing this story because I remembered having read lots of things about cattails and their various uses. I recalled that most of their parts are edible in one form or another. They are considered a wildflower, and although they may not appear very floral to the untrained eye they are in the order of pandanales. This refers to a group of botanical organisms called monocots, which would have evolved from a common ancestor and are said to include about 60,000 species. Orchids are the largest family in the group, making up about 20,000 species. Bulbing plants like asparagus, bamboo, bananas, daffodils, garlic, ginger, grass, lilies, onions, tulips and wheat are also monocots.

Let’s discuss something about their anatomy and habitats, and then move to the way their various parts can be utilized. Cattails are common emergents in marsh habitat; these are the plants that grow in the soils beneath the water’s surface but whose leaves extend upwards into the air. The stems of the cattail are spongy when pressed between the fingers. This is because, like many other plants rooted in the marsh plain, they have numerous air spaces in their internal cell structure that allow them to access greater amounts of oxygen. Some marsh plants die back each year so that in the winter there is little surface evidence of their existence (for instance pickerelweed, arrow-headed plants such as arrow arum, and lilies), while other plants persist in various forms throughout the year—cattails, phragmites, sedges, and grasses. Thus in the case of a marsh that has cattails, there is some structural evidence year round.

The stalk of a cattail has both male and female parts on the same stem, and although they resemble grass this differentiates them. They are in a monocot family of aquatic plants. The male pollen is above the female flower and is transported by wind for pollination. Once all the pollen has been dispersed it falls off and leaves the female flower remaining alone atop the stalk, looking very much like a hot dog on a stick. This may persist even into spring of the next year. The dense cylindrical spike of the female flower is made up of seeds and cottony fluff, which aids in wind dispersal. When pinched it nearly explodes as thousands of minute seeds (0.2 millimeters) become airborne, attached to fluff.

The plant spreads not only by seed but also by rhizomes. These are horizontally growing roots that can send up a vertical shoot or stalk. Native to the United States, the cattail exhibits hearty growth and can often create a monoculture as it crowds out other species. The lack of diversity in the marsh has limiting factors for wildlife use. There are many studies about the conditions that cause cattails to overtake a marsh plain. In moderation cattails are considered a positive marsh species but in a monoculture they are often described as invasive. At CU, however, we refer to prolific non-native plants as invasive and native plants in over-abundance as highly aggressive.

Since recorded time Typha has had many uses. American Indians ate the tender new shoots and apparently some trendy restaurants offer them as well. The rhizomes can be eaten raw or roasted similar to potatoes, or dried and ground into a flour. The pollen from the male flower can be collected for use as a nutritional additive in flour-based products like bread or pancakes. Native Americans are said to have dipped the cylindrical spikes in fat and burned them as torches. The English call them bulrush and when woven they are used for rush seats. The leaves are collected for barrel caulking.

Cattails also play a role in nature’s food chain. Muskrats, crayfish, waterfowl, insects, and others eat various parts of the plant. Hummingbirds use the cottony material to line their nests.

Pioneers gathered the cottony seeds, sometimes called “swamp down,” for pillows, quilts, and doll stuffing, as well as for insulation. The down was also used for flint-struck fires.

Kapok, a tropical plant imported from Dutch Indies, was an important fiber in the manufacture of padding in life jackets and mattresses. During WWII, when the Japanese took over the islands, a Chicago company substituted cattail cotton in furniture, cushions and baseballs.

The U.S. Navy also employed swamp down for life jackets as tests showed it to retain buoyancy for more than 100 hours. Prior to WWII Germans made wall board out of the down for sound and heat insulation.

So what’s with the shepherd’s crook shape that we saw in the male flower? Gerry Moore suspects that it is a hybrid of the broad leaf with the narrowleaf species of the plant. The narrowleaf (Typha angustifolia) has a separation between the male and female flowers, whereas the broadleaf or common cattail (Typha latifolia) does not. The shepherd’s crook, on the other hand, has a slight separation. Stay tuned!

International Secret Society of People Who Sleep with Cattail Pillows