Allow this cog-wheeled monster to do its job in keeping your garden free of pests— but give it a wide berth. 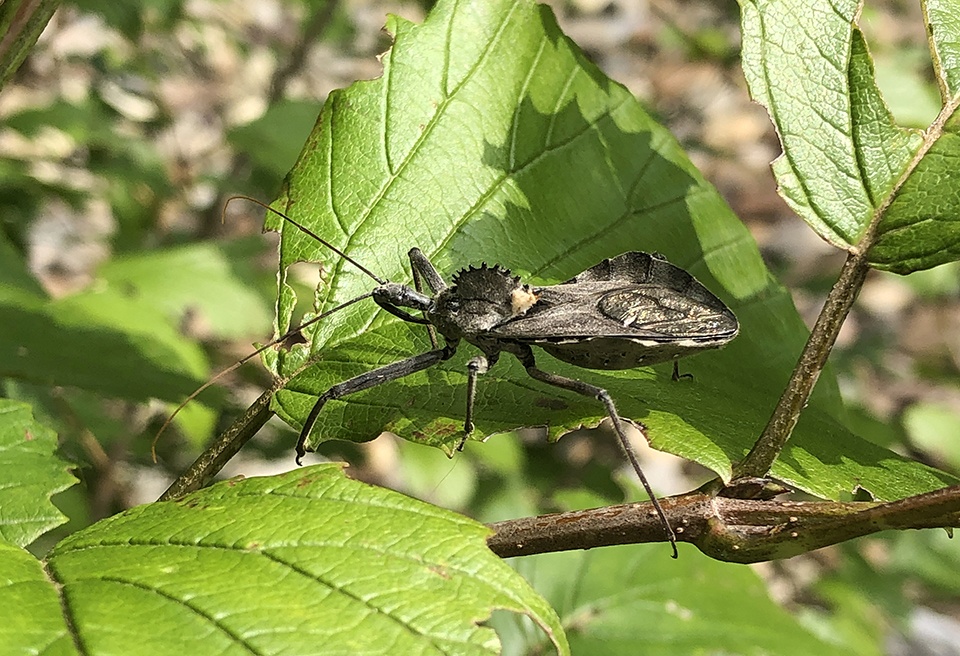 Citizens United was holding a program in the garden at our house when one of our volunteers came up to me with a prehistoric-looking insect on his finger. He inquired, “Jane, what’s this?” I replied, “Well, I’m trying to remember the name, I remember it’s linked to that gear-like structure on its thorax. One thing I do remember is that its bite really hurts.” His face took on a discernible frown even though he was good-humored about it. “What should I do?” he asked. My reply was, “Put it back where you got it, very gently.” And as he took slow measured steps I called out, “Oh yes, I remember now, it’s called an assassin bug.”

There are a number of assassin bugs but he had the largest of the 150 or so known species found in North America—the wheel bug or Arilus cristatus, measuring about one and a quarter inches. They are members of the family Reduviidae. They are called wheel for the cog-like crest on top of the thorax, the thorax being the mid-section of an insect between its head and abdomen. The teeth in this wheel structure number from eight to 12.

All of the assassin bugs are known for the efficient way in which they dispatch their prey, which consists of other insects. They have a curved straw-like mouth part that they stab into their victim with deadly speed. Many articles describe their attack style as one of “ambush,” as they lay in wait and swiftly attack.

They inject saliva containing a toxin that immobilizes the prey within 15 to 30 seconds. The toxin breaks down the body tissue and then they sip up the body fluids through the same straw-like mouth part, called a stylet.

Although they can inflict a very painful bite, they are still said to be the gardener’s friend. This is because they eat numerous species of insects that gardeners consider to be pests. In fact, if you kill one you are allowing thousands of other bugs to survive in your garden. And you are preventing their hundreds of future offspring from providing the same benefit.

They rarely bite people but when they do it is a memorable event, exceeding the pain from a bee or wasp. The pain is often followed by numbness for several days. The affected area is red and hot to the touch. Sometimes hardened skin will fall away, leaving a hole at the site of the puncture. There are many articles about treating the bite and all suggest that hospitalization is not in order; they simply recommend taking a pain-killer like ibuprofen.

However, should a person have an allergic reaction, obviously professional medical treatment is necessary. If you haven’t passed out, allow me to say that thankfully their aggressiveness is primarily limited to their prey unless provoked. In other words I would not suggest handling them.

These are some of the pests they dispatch—caterpillars of a number of moth species, sawflies, aphids, many beetles, cicadas, leafhoppers, and stinkbugs. They feed on many caterpillars that defoliate trees. Unfortunately, they also prey on some beneficial insects like ladybug beetles and honeybees.

The female sometimes kills and eats the male after mating, which seems counter-productive to me since assassin bug males guard the fertilized eggs, a very rare trait in the insect world. Doug Tallamy theorizes that males guard eggs because it makes them more attractive to other females, allowing for more mating opportunities.

Tallamy is studying Rhynocoris tristis, a different species of the Reduviidae family or assassin bug family. The University of Delaware Messenger article on his study suggests that all assassin bugs guard.

An egg cluster can be 40 to 200 eggs for these insects. The eggs look like tiny cylinders or barrels with a creamy-colored lid. They are laid side by side on a flat surface and cemented together. The nymphs do not look like the adults but are more ant-like with a large abdomen. It is believed there is only one generation produced each year, with five instars or molts that total 99 days to reach the final adult size.

Assassin bugs have been found in habitats with goldenrod, cotton, sunflowers, a variety of flowers, citrus groves, pecan groves, fruit trees, and forest, so they are rather adaptable. I’ve seen these very prehistoric-looking bugs in my garden a number of times over the years, and like most insects, learning about them is always fascinating.