Usnea, or beard lichen, is known as a bioindicator because of its intolerance for poor air quality. 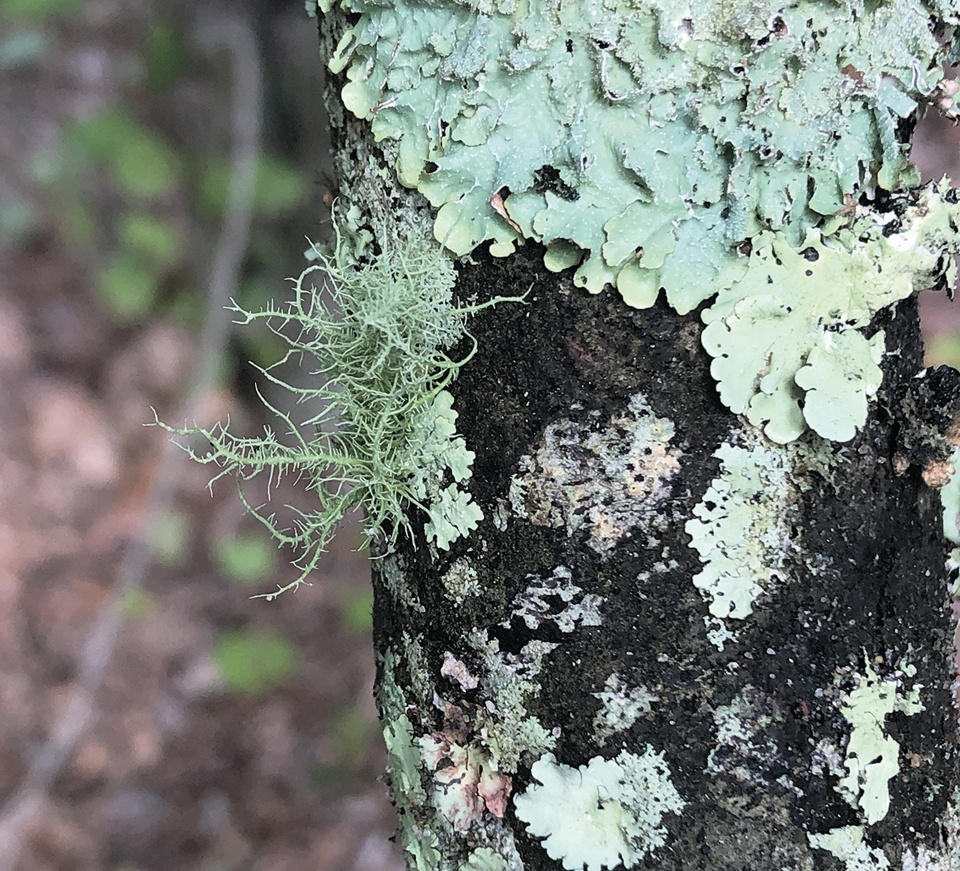 Often when CU Maurice River members are on a hike, one of our naturalists who has an interest in botany will discuss Usnea sp., a lichen, because it’s just so darned fascinating. It has a number of common names like beard lichen, and old man’s beard, which also refers to a clematis species. So for the purposes of this article we will simply call it usnea, pronounced us-knee-ah’.

The common names allude to its appearance. With no distinctive main stem, it is described as undifferentiated. It looks a bit like Spanish moss in that it hangs from tree limbs. In fact the scientific name for Spanish moss, usneoides, means “resembling usnea.” Like other lichens usnea does not have a stem with leaves, lacks true roots, and has no vascular system. Lichens are composed of layers of fungus and alga; they are not considered plants.

The outer layer of the lichen is the cortex. This is what provides the color in some species. When it gets wet the cortex becomes more transparent and the agal layer beneath shows its vibrancy, which can be indicative of the type of alga.

The lichen’s structure is comprised of filaments called medulla. Rhizines are fungal strands that extend from the medulla and attach the lichen to a surface. Rhizines are not roots, in that they do not extend water or nutrients to the lichen; they are simply an attachment. Some lichens have a central peg or “holdfast;” these are called umbilicate lichens since they are umbilical-cord-like.

Lichens fall into one of three categories—foliose, crustose, or fruticose. Foliose have distinguishable sides, a bottom, and a top. Some look like lettuce while others have ridges and bumps. Crustose have a crusty surface and lie rather flat on their supports, which are often rocks. Usnea is fruticose and described as pendulous (pendant-like, or hanging down), shrubby, shaggy, and some are cup-like.

Usnea is a pale grayish-green and looks like tiny shrubs, tassels, or hairs like—yes, a beard. One diagnostic quality is that when you stretch the cortex and medulla gently apart there is a central cord or axis beneath it. This elastic cord is white or silvery in the center of the thallus (body) surrounded by the cortex. Some species of usnea can grow from a few inches to 20 feet. In the eastern United States it is normally of shorter growth than in the Pacific Northwest. The lichen spreads by fragmentation. In usnea, spore-producing structures are considered very rare, so wind, rain, animals—especially birds and squirrels—and trees rubbing together break off bits that may attach to other substrates, primarily the bark of trees. It doesn’t tend to distribute over far distances, generally being limited to about 16 feet, so it is often found clustered in areas.

Some lichen do reproduce sexually by the transport of spores. The spores travel through the air and if the conditions where they land are conducive, they can grow into lichen.

Usnea’s global range or distribution includes North, South and Central America, Europe, Asia, Australia, and Africa (IUCN). The largest known occurrences are found along our western coast from northern Californian to Alaska. Today it has been extirpated from many areas in Europe and Scandinavia because of habitat changes and air pollution. In fact, its presence is often an indicator of better air quality, thus usnea is called a bioindicator because of its intolerance for poor air quality. Lichens also provide valuable ecoservices such as carbon cycling, or converting carbon dioxide into oxygen. It also retains water. We need both of these to survive.

The largest amounts of usnea that I’ve seen have been along the shoreline of Barnegat Bay. It’s possible that rising sea levels are killing some of the vegetation, and usnea often grows on sick or dying trees because there is less canopy due to leaf loss. This allows for greater photosynthesis by the lichen’s algae. Usnea is an epiphyte, using the tree’s structure, but it is not parasitic. Gardeners sometimes wrongly blame it for the demise of trees, when in fact the sick tree is actually just allowing greater growth of the algal aspects of the lichen.

One of our recent articles described birds using antifungal plants in their nesting materials. Usnea is a common choice due to its health aspects. Campers also use it as “nesting material” for stuffing mattresses, pillows, and sleeping bags. Like sphagnum moss it also has traditional uses in sanitary napkins and diapers.

Animals often eat it but it has not historically been used as food by humans. Lichens are said to be low in protein and high in carbohydrates.

One of our members is always investigating the medical uses of botanical sources, and usnea is a bit of a treasure trove in that regard. It contains usnic acid, which has both antimicrobial and analgesic properties. Traditionally, it was moistened and used as a poultice on wounds and boils by Native Americans, and there are records of the Chinese medical community using it for over 2,000 years. Today, it is employed for oral inflammations and is found in some lozenges. It is used in the treatment of bacterial and fungal infections and it contains antioxidants. As is the case with all medical plants, you have to know how to use it or to extract its medical properties, since it can cause stomach upset and it tastes rather nasty. It’s wise either to leave its preparation to experts or do a lot of homework!

US Forest Service, US Dept. of Agriculture