Acrobat ants a reprieve from baits and spray— and the web of life goes unbroken. 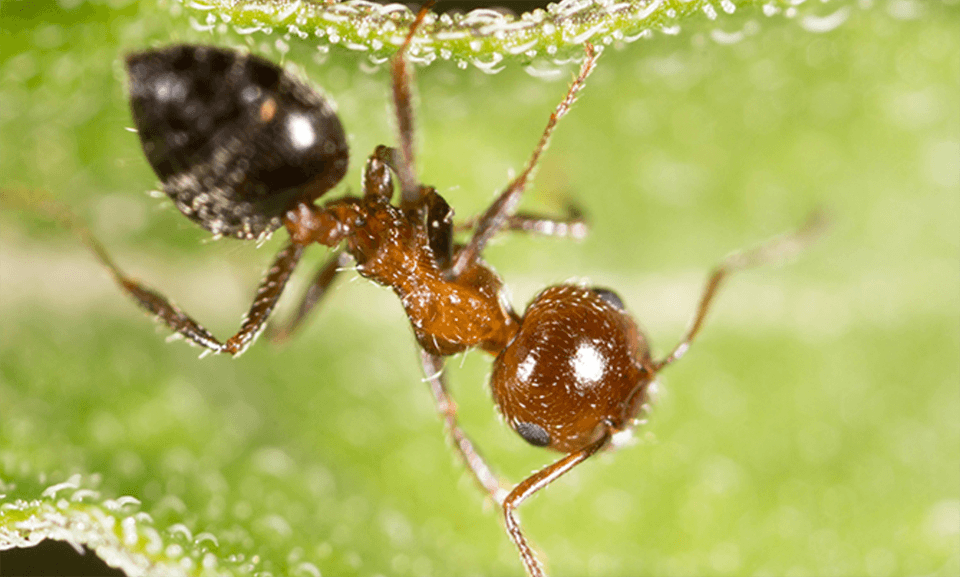 It was time for our annual termite inspection a few weeks ago. I met the exterminator at the house and thankfully the termites are apparently not dining in, or at least they are not leaving any tell-tale traces.

I asked the inspector if he might be able to identify what has been inhabiting one of our sheds. He is not allowed to treat outbuildings, but I thought he could possibly lend his identification skills as to what kind of ant visits and leaves some sort of droppings.

Now, mind you, this ant has some very specific behaviors. It runs along the inside of the roof ridge, its numbers are possibly 20+ across in a line 10 feet long, and they are back to back and belly to belly, or gaster to gaster, as is the case for ants. The exterminator told me that they were “acrobat ants” and that they seek high places. I must admit our house is a circus at times. He also told me they are cannibalistic, and that what I was seeing weren’t droppings but rather body parts! Not just a circus but a freak show to boot. Should I install a trapeze or might that just encourage them further. But really?

Time to investigate. It turns out their proper name is Crematogaster cerasi. Apparently, it is all about the “gaster” or abdomen when it comes to their common names. They carry their abdomen high and omit an odor, especially when they are disturbed and performing their distinctive behaviors that look like a balancing act—thus “acrobats.” Also “cocktail ants” because they appear to be toasting with a drink when they raise their posterior. And lastly “Saint Valentine ants” because their final segment, the gaster, is heart-shaped when viewed from above. They are arboreal, primarily nesting in trees, and therefore favor what my bug man described as the highest point.

I asked if I could bait them. Being a product of my cultural upbringing, bugs are bad with few exceptions. Then thankfully my intellect took over. “Do they eat wood?” I inquired.

“No.” (In fact, they can to enlarge their nesting site, not likely our shed, but not a desired house guest either.)

Okay. “Do they pose any problem?”

Intellect reminds me, “Insects play a key role in our survival.”

Time to find out what they do; after all, any bug accused of tipping a glass in a toast ought to get more than a cursory nod, don’t you think?

Like other ants they are eusocial. This means they have an advanced social structure that involves a single female or queen who produces the young, and then the nonreproductive female workers care for the brood. These workers feed regurgitated food to the larvae and pupae. Clearly, it’s good to be the queen!

There are different sized ants for various job assignments, but not all ant species have large workers in their colony. The males’ job is to aid in reproduction. They live a very short lifespan, a few weeks to a month, and die shortly after mating. For mating the queen and suitor have wings, or flights of fancy one might say. It is surmised that while acrobats live a few months, colonies can persist for 10 years, and queens are thought to live for several years.

What do they eat? Living and dead insects, especially wasps, as well as seeds, grains, nectar, and the nectar of other insects. In fact, they can detect chemical substances that wasps emit. Aphids secrete nectar that the ants use for food, and they will even cohabitate with certain beetles that emit substances that they can ingest. With seeds they consume the fleshy part of the structure that contains lipids and proteins, but not the productive part. They will also guard certain plants from wasps and from other predators with their raised abdomens. Their bite emits venom that can sting and itch; all ants can bite.

Acrobat ants protect plants that provide shelter and hold secreted food, such as the aphid might extract. And they chase off some insects that might consume them. When plants live in association with certain species of ants it is called myrmecophytism. This mutualism is what an ecosystem is all about—co-dependencies.

When I was in school they taught us about the food chain. It went something like this: Algae were eaten by a minnow, a minnow was eaten by a bass, and the bass was eaten by an osprey. Therefore, if we lost the minnow the bass and osprey would also be gone. Today they teach the food web, because we now know that the system functions in a far more complex manner and is not linear. It is diversity of species within systems that gives more connections to the web and makes it stronger.

Most importantly, we need to appreciate plants and animals and their co-dependencies and specializations. Over eons insects have become closely dependent on specific plants, and thus specialized. This is the cycle, or an aspect of the web: Plants convert sunlight’s energy into food. Insects pollinate plants. Insects turn plants into soil that in turn grows more plants. Plants feed animals and people. No plants, no butterflies, no birds, no bees, and no us. Plants clean our air and water and retain our soil. Insects pollinate 87 percent of plants and 90 percent of flowering plants. Without insects we perish—no fruits, no vegetables. Let’s try that again. No plants, no insects, no insects; no plants, equals no animals, no us.

Okay, so I don’t want insects to eat our house down. But for now I’m holstering my bug spray and baits, so the acrobat ants get amnesty. And with no sign of termites, the exterminator used only his flashlight. n