In a bleak winter landscape, the red-bellied woodpecker adds a refreshing dash of color. 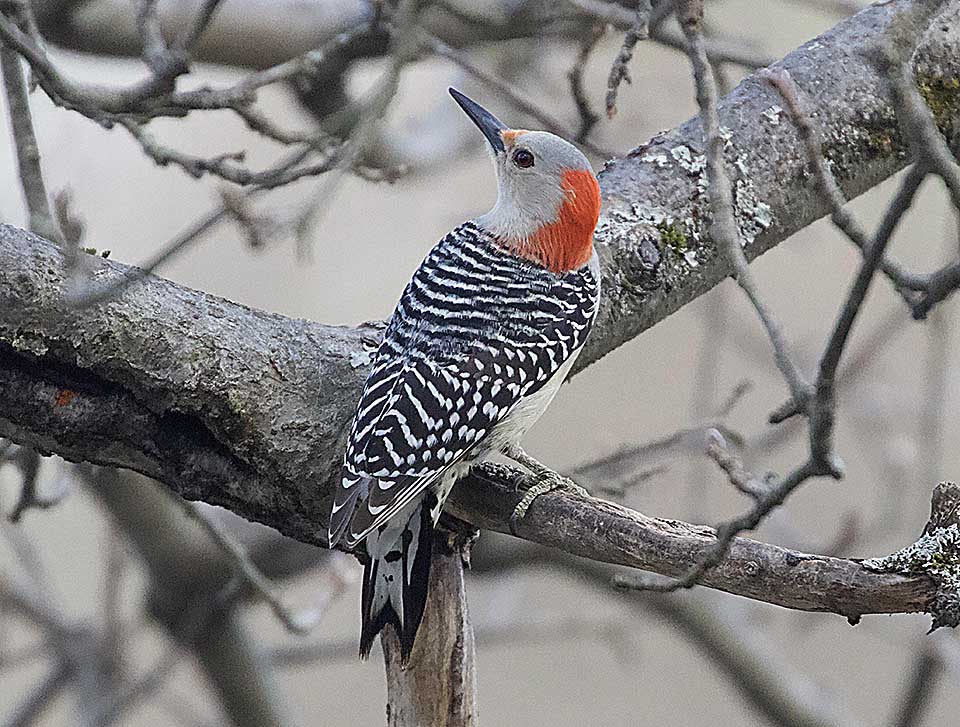 Female red-bellied woodpecker shows off barred pattern on her back and a red nape that’s not as extensive as her male counterpart.
by J. Morton Galetto, CU Maurice River

If you feed birds and provide suet you are probably familiar with this feathered resident. Whenever I talk about red-headed woodpeckers and their endangered status, someone in a group of newbie birders usually exclaims, “I have a red-headed woodpecker; it comes to my suet.” I raise an eyebrow in skepticism since they are a rarity. My response is, “Really, with an all-red head?” And after a bit of photo ID sharing they admit, “Yes, that’s what it is—a red-bellied woodpecker.”

One time the people were confident in their identification and when I inquired where they lived, they replied, “East Vineland, near Hance Bridge Road and Covered Bridge Road.”

“Why, yes! Indeed you do have a red-headed,” I told them. In southern New Jersey there are well-known enclaves for red-heads and this is one.

So I thought it would be fun to talk about a bird that you likely see often if you feed birds in winter—the red-bellied woodpecker—and to help you to make a good identification.

These birds are common in southern New Jersey and have a distinctive purr call, described phonetically as a rolling “kwirr.” They are commonly heard before seen, and like all birds more often heard than seen. For this reason birders are really into birds calls. There are numerous learning gimmicks to help us remember things and bird calls have many mnemonics phonetically presented to help us remember their calls. Some are easy and represent their name, like the chickadee’s “chick’-adee-dee-dee,” or the eastern phoebe’s, “fe’-be.” Others are words like the yellow warbler’s “sweet sweet sweet, I’m so sweet.” And some are nonsense such as the magnolia warbler’s, “weeta-weeta-weeto.” In any event the call of the red-bellied woodpecker is common in our local forests.

Woodpeckers communicate in ways beyond their call and rely on percussion: They drum. Their skulls are specially designed to drum and drill. They drill to excavate cavities for nesting and to access insects. This often produces a drumming sound, but they also drum to attract mates. People often call me because a woodpecker is drumming on their house siding and the racket can be annoying. The siding sometimes acts as a very large drumhead and if it is mating season (late May early April), this behavior might be hard to discourage. But it could actually be a signal to you that an exterminator is in order. It turned out after one such inquiry that the woodpecker was tipping off the homeowner that they had carpenter ants; thank you, noisy woodpecker!

How do they do all that drumming and not get a headache or worse? The base of the woodpecker’s upper bill has a spongy bone that helps to buffer the skull. The lower mandible extends beyond the upper bill slightly, and since it strikes first it does not transmit the pounding to the skull. Additionally, their brains are placed further forward in the skull cavity to distance the cranium from the vibrations caused by the impacts of drilling.

Many insects can be picked off on the surface of tree bark, but to access those that have bored deeper into the tree woodpeckers have special adaptations. First their beaks are long and slender. And they have a remarkable tongue connected to hyoid bones that wrap around the skull to the forehead. The hyoid slides in a sheath controlled by muscles, allowing the tongue to be extended beyond the tip of the bill in a distance equal to the beak’s length. The tip of the tongue is slightly barbed, and split to capture prey, and can be wrapped around invertebrates for extracting them from the interior of holes. The male’s tongue is a bit wider and longer than the female’s. Hummingbirds have a similar anatomy.

Red-bellied woodpeckers are omnivores. In addition to insects, arthropods, lizards, other birds’ nestlings, and minnows, they are especially fond of acorns, pine cones, and fruits such as grapes and hackberries. In southern climes or if provided at feeders they will eat oranges and mangoes, too.

Their feet aid them in grasping the bark of tree trunks. Most perching birds have three forward-facing toes, but woodpeckers have zygodactyl feet‚ two forward and two back, making them more adaptable to walking on a vertical surface.

At first blush and without a good pair of optics and proper lighting one might ask, “Red belly, huh?” The red-bellied woodpecker’s abdomen is light gray with only a light wash of red sparsely dispersed and it does have a red cap and nape. The male’s cap extends to the top of the bill but the female’s is truncated. The back of the bird and wings are strongly barred in white and black stripes. The other six woodpeckers in New Jersey do not have this distinctive barring. The downy is more splotched and smaller. The other species are pileated, hairy, yellow-bellied sapsucker, downy, and northern flicker. Of these the most likely to visit your feeder if you put out suet is the downy.

To avoid misidentification of our subject species as red-headed, know that the red-headed woodpecker has a fully red head covering, from the forehead to the nape, and chin to throat, including the ear coverts/cheeks. The red-bellied male has red on its forehead and nape, while the female’s red is restricted to the nape and their ear coverts are white. So red-bellies are only crowned in red. The red-headed is larger and in flight it has very distinctive white patches strongly contrasted against black wings.

Red-headed woodpeckers are endangered in New Jersey and a rare find unless you live near an enclave. Conversely red-bellied woodpeckers are very common and the extension of their range northward has made them even more so. Currently they are rarely seen north of southern New England (southern Massachusetts), but they are common to the mid-western United States, extending to the Gulf of Mexico. Throughout their range they are year-round residents. They are rarely seen outside of the United States.

Woodpeckers have a very diagnostic flight pattern. They flap and then glide with wings closed, giving undulations to their flight with a missile-type appearance between flaps. The appearance resembles a waving rollercoaster.

As mentioned earlier they are cavity nesters, so dead trees or hollows in trees are important. Insect-ridden trunks that have been partially excavated are sometimes utilized. Digging out a nesting site is part of the mating ritual; sites may be used multiple years but more typically just once. The male selects a likely nesting location and begins tapping or drumming. If a female joins him excavation commences. The ritual is complete when the female enters the cavity and communicates acceptance by tapping an invitation of sorts.

Nesting cavities are normally eight inches to a foot deep, and eggs are laid on a bed of wood chips. The clutch is two to six eggs and they can have up to three broods in a season, during which the male and female are monogamous. The parents share in nesting responsibilities. They incubate for 12 days and nestlings fledge in about a month’s time. Southern birds would be more likely to have multiple broods because the weather would be most favorable to a longer nesting season.

This evokes a climate change comment. The bird’s range is extending northward as our earth warms. They can adapt to a wide variety of forest types and food resources. Warmer weather makes the species more prevalent, but possibly more abundant in its common range as well, so brood numbers may increase, weather permitting.

I’m more interested in providing habitat for birds than feeding stations. But if you feed birds, especially with suet, you are likely to see red-bellied woodpeckers often. Remember that birds like feeding on the ground, so toss feed thinly about and change spots often. Put old Christmas trees or stick piles near feeding areas to give birds safe cover. Hopefully you will enjoy making a positive ID on your resident birds!

Sources:
What It’s Like To Be A Bird, David Sibley
Birders’ Handbook, D. Dobkin, and D. Wheye.
All About Birds, Cornell