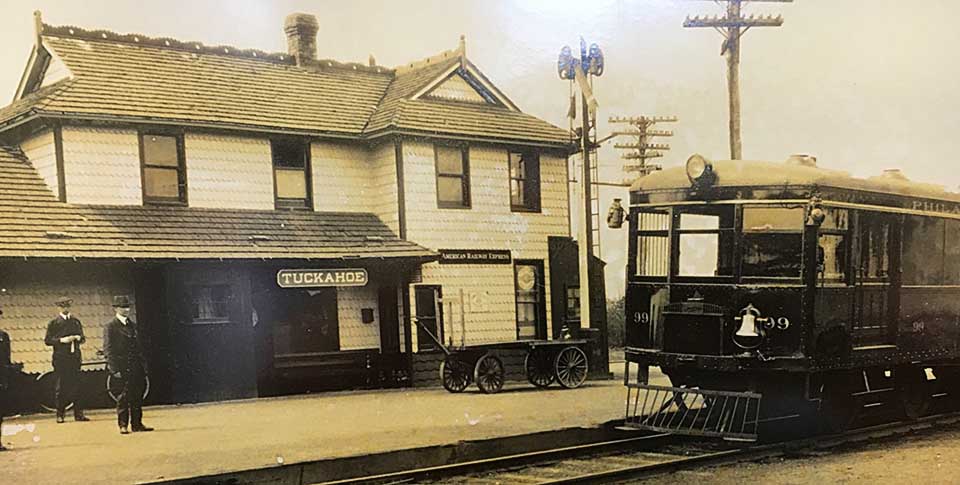 Tuckahoe Station was once a mainstay of the railroad lines linking Winslow with Sea Isle City and Cape May during the early 20th century era of passenger trains that allowed workers, tourists and visitors to traverse southern New Jersey prior to the mass production of automobiles. Today it bookends the routes of two Cape May Seashore Lines excursion trains and enjoys a spot on the National Register of Historic Places.

The station was built in 1894, four years after the Philadelphia & Seashore Railway first planned a line running through the town and one year after ownership of the line changed hands twice. The West Jersey Railroad purchased it from the Philadelphia & Seashore Lines in 1892 and subsequently sold it to the South Jersey Railroad Company a year later.

By the time these rail lines became part of the Atlantic City Railroad in 1901, according to Wentzel, “all trains stopped at Tuckahoe…many steam engines took on water here from a water tank…”

In time, the rail lines running through this area of South Jersey belonged either to the Reading Company, Pennsylvania Railroad or Pennsylvania-Reading Seashore Lines.

The website for the Santa Express excursion trips, one of the themed train rides offered by the Cape May Seashore Lines from Richland and Tuckahoe, explains that “trains operating to the coastal resort communities of Ocean City, Strathmere, Sea Isle City, Avalon, Stone Harbor, Wildwood and Cape May City passed through Tuckahoe.”

In our age of automobile and plane travel, it may be difficult to comprehend just how many people relied on railways during the first half of the 20th century. Even with mass production of cars and the construction of highways, rail travel continued to provide an economical means of transportation.

The Santa Express website offers a concise appraisal of the railroad’s popularity in South Jersey shore points during the late 1920s: “In the summer of 1927, near the high point of activity, there were eleven Reading Company and nine Pennsylvania Railroad scheduled ‘through’ round trips on weekdays and Saturdays. On Sundays, both railroads had eight ‘through’ round trips. Additionally, during the summer, there were extra trains chartered for private parties, such as church and fraternal organizations.”

Because it was serving several rail lines, Tuckahoe Station, Wentzel reports, underwent more than a few changes over time. “The station was enlarged on the south end and the freight house was also built at this time,” he notes.

In its original design, Wentzel writes, “the waiting room was the larger room in the middle of the station,” but “in later years, the passenger waiting room was in the front of the station (North End) with entrances to both the Cape May train side and the Ocean City/Sea Isle side. There were bunk rooms on the second floor for train crew use.”

As the second half of the 20th century unfolded, the railroad was used less for passenger travel. Wentzel writes that the last passenger train to arrive at Tuckahoe Station in this era did so on October 2, 1981.

In the 21st century, passenger service has been revived and attention is once again paid to historical structures like train stations. According to the Santa Express website, “three original, restored structures of the former Reading Company complement the historic charm of Tuckahoe Village. They are: the passenger station (built in 1897), the interlocking tower that controlled the switches and signals (built in 1906), and the steel water tank that was used to supply water for steam locomotives (built in 1922).”

It’s rather appropriate for what the Santa Express website calls “the most important junction on the Cape May Branch for over 100 years.” n