V is for Vulture

Vultures help protect us from the carcinogens present in decaying matter. PART 2 of 2 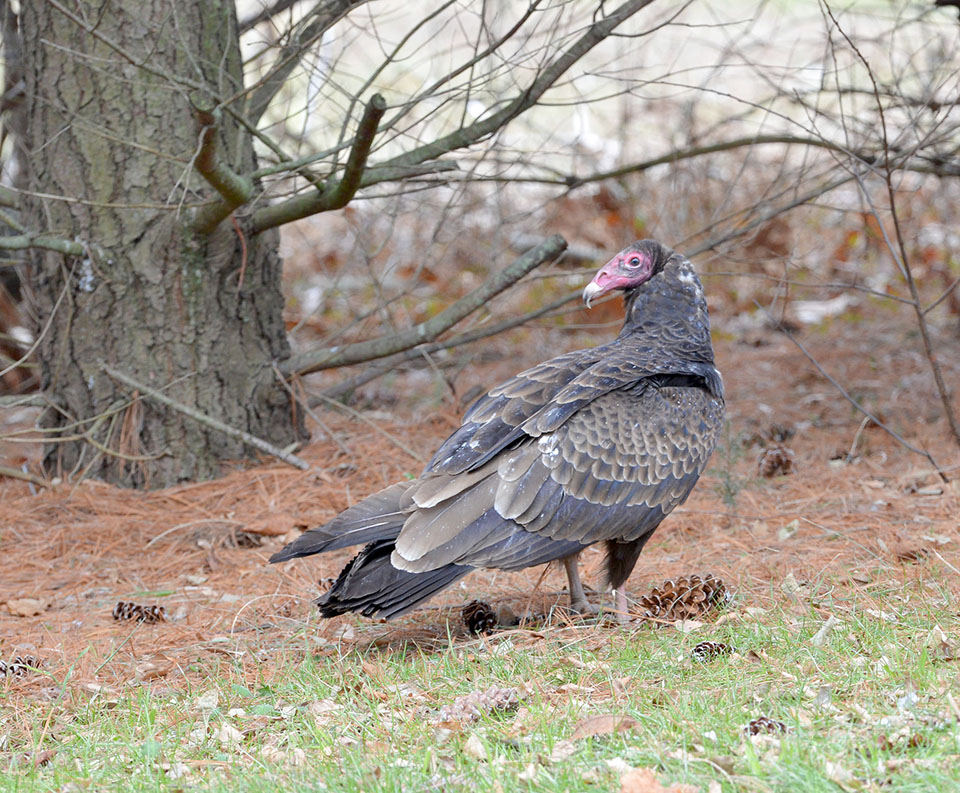 One of my favorite cartoons is of a group of vultures hunched over the carcass of a clown in the desert; one vulture turns to the other and says, “I dunno, does this taste funny to you?”

Last week, I gave you an introduction to the importance of vultures in our natural world and some glimmer about their cultural significance as well. Today, I would like to explore some very interesting facts about these local denizens. We have estimated that as many as 600 turkey vultures live in Bevans Wildlife Management in southern Millville and in the surrounding forests. More recently, black vultures have taken a liking to southern New Jersey as well. This more southern species is speculated to be increasing in our region due to climate changes.

Vulture numbers have grown in the last 50 to 100 years. Animal roadkills are thought to play a part in this increase, since vultures eat only carrion and are opportunistic. They rely on the demise of an animal for a meal and are not capable of attacking like their raptor compatriots. Their feet are more like a chicken’s than the talons sported by hawks. Being an opportunistic feeder means they must conserve energy because they can’t capture their food, although they can survive on one meal a week.

This energy conservation strategy is responsible for many of their behaviors, and therein lies my fascination with vultures. Much to some people’s dismay they occupy large night roosts and often return for many days or even years. On the roost, they drop their body temperature, slow their heartbeat, take on a hypoactive state, and become slightly hypothermic. Their droppings have an odor. Also, some people are simply creeped out by vultures because of cultural associations as harbingers of death.

When vultures wake up they don’t immediately take to the sky; rather they assume a heraldic pose with wings outstretched to warm up. They often choose dead trees so that sunlight doesn’t have to penetrate leaves to reach them. Their dark feathers absorb the sun’s rays and they take to the sky only when they have shed the chill of their dormancy. When they fly, they ride thermals, or the heat rising from the earth. They are very lightweight, about three pounds, for their size (six-foot wing span), making sustained flight easier. It often seems like they will fall from the sky rather than give in to a flap of the wings. This teetering makes them easy to spot and identify from other raptors.

On field trips we tell people that their wings are held in a slight “V” as in “Vee is for vulture.” This wing position is known as a high dihedral, and northern harriers also hold their wings in a similar position. In flight, at a distance, this and the small head make a vulture distinguishable from other raptors such as hawks or eagles. The vulture’s head is also featherless but this is not necessarily apparent from afar. However, the naked head does little to make them more endearing; in fact, I often say they have a face only a mother could love. But consider this: If your head were often in a bloody carcass, bald would be better!

While their vision is not as good as other birds of prey, vultures have an excellent sense of smell, unlike most feathered species. They can detect a carcass within 12 to 24 hours of death. In fact, German police use trained vultures to find missing bodies, and gas line workers observe vultures to detect ethyl mercaptan escaping along lengthy gas lines, since mercaptan and decaying meat are similar in odor. Vultures will hang out near landfills and houses with gas leaks for the same reason.

Okay, here’s one for the road. Two lazy vultures board a plane with a dead ’possum in tow. The stewardess inquires, “May I have your luggage placed below in the hold?” To which the vultures reply, “No, thanks; that’s our carri-on.” Bada–bing.