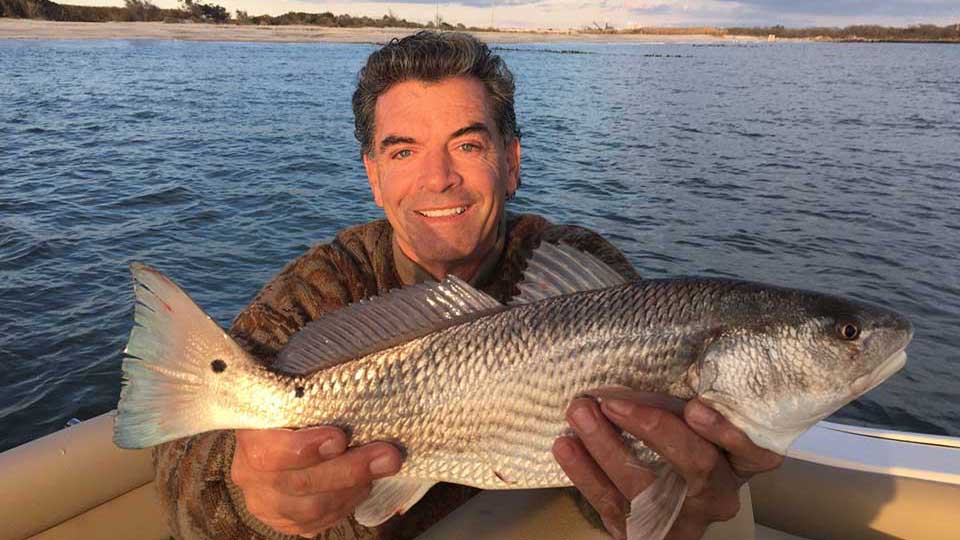 On Thursday, September 22, my husband and I discovered two large shrimp in the stern of a boat moored at our dock on the Maurice River. This prompted me to reach out to Dr. David Bushek, who is a professor of Marine and Coastal Sciences at Rutgers and director of the Rutgers Haskin Shellfish Research Laboratory in Port Norris. Following is the content of our conversation:

“Hello Dave, Jane here. You know I’m not in any way a biologist or an expert in the species of the Maurice River but to the best of my knowledge we only have tiny brine-like shrimp in the Maurice. My husband is a glass artist and he has a boat filled with glass balls moored by our dock. It is lit at night and a great blue heron hunts the fish attracted to the light. Peter was checking the bilge pumps and found two large shrimp on the stern about five inches long. Can you shed light on this?”

David began to laugh and replied, “My staff returned from a trawl earlier this week and said, ‘Guess what we caught? White shrimp.’ They showed up a couple years ago in Delaware and I’m told they’ve started an experimental fishery this year. White shrimp are one of three species that make up the large shrimp fisheries in the Carolinas, the others being brown and pink shrimp.” Apparently as early as 2015 white shrimp had begun to show up for the first time in some trawls.

“I’ve read about global warming most of my professional life. It’s a slow and steady process that is almost imperceptible and I didn’t think I would see much change in my lifetime. Certainly not this fast. Things are really changing. White shrimp are common off the Carolinas, but now they are here in the Delaware. We still see summer flounder in the bay but winter flounder are essentially gone. We are even hearing about people catching red drum, a southern species also called redfish or spot tails. Less than a degree in water temperature makes a big difference.”

Since our conversation I’ve discovered that Wachapreague, a town in Virginia, had dubbed itself “the flounder capital of the world.” But summer flounder have relocated to New Jersey and New York, and they no longer catch them there.

Dr. Bushek described a number of southern species that have expanded their ranges into our area. Fish population centers have been shifting as fish seek cooler waters. However, things are a lot more complex than just this shift. Jon Hare of National Oceanic and Atmospheric Administration Northeast Fisheries in Rhode Island points out that the mid-Atlantic fisheries’ waters have one of the largest temperature ranges between summer and winter of anywhere on earth. One can only imagine how this variability, not only within each year but between years, makes data challenging to analyze.

Furthermore, fish regulations protect predatory species at the expense of their prey. The variables are also thought to reflect cyclical impacts of fishing, as commercial and recreational fishermen have to be opportunistic in what they pursue.

Not only have fish expanded ranges but birds have as well. Black vultures that were nearly nonexistent in southern New Jersey 35 years ago currently live here year-round. And in the last few years white ibis has expanded its range north. These birds now compete for limited rookery space with our historic nesting species like glossy ibis, night herons, and great and snowy egrets.

Back to our shrimp. I persisted with Dr. Bushek, “Dave, our dock is nearly in Millville. What are the dynamics of the shrimp being this far upstream?” “Well, that is how it works,” he told me. “The white shrimp spawn offshore in the ocean. The larvae hatch from the eggs and develop in the plankton where they drift with the currents until they develop into a post-larval stage that migrates back into the marshes of the bay and tributaries. They grow quickly in the rich marshes that surround the bay and line our rivers, maturing in one season to five or six inches before migrating back out to the ocean.”

Many species of fish lay their eggs or young in freshwater and return to the sea; these species are called anadromous. Examples are striped bass, shad, salmon, and sturgeon. Others are catadromous, meaning they grow up in freshwater but spawn in the ocean. Our American eel is probably one of the best known catadromous fish, living most of its life in our estuaries and bays and then migrating to the Sargasso Sea to spawn. White shrimp have a similar life history.

Estuaries are where the freshwater and saltwater blend, resulting in brackish water that provides abundant nutrients. The freshwater comes from our streams and rivers and mixes with saltwater from the ocean; the force of the two tidal cycles each day promotes the interchange. Fish fry and small crustaceans like crabs and shrimp don’t need deep water, so tidal marsh pools offer them protection from larger predatory fish that are too big to swim in the shallows or through the marsh grasses. Also, some young fish can’t tolerate the saltier water until they are more mature. The large marshes of the bay and its tributaries are aquatic nurseries.

The flow of freshwater is so important that an interstate regulatory body, the Delaware River Basin Commission, oversees withdrawals to ensure that enough water flows to the bay to help maintain healthy and abundant fisheries. Much of the northern waters that comprise the Delaware River also constitute New York City’s water supply. Without coordinated regulation, water could be depleted to the point that the saltwater line would extend too far northward, impacting the fresh drinking water needed for the Philadelphia area and the marsh nurseries of the Delaware Bay.

David, being a good professor, quizzed me on a few characteristics of the shrimp we spotted, asking, “Are the antennae longer than the body?”

“Are there prominent grooves on either side of the head and tail?”

“No, but the head has a ridge and is pointed like a unicorn.”

“Then yes, they are white shrimp, not brown. We haven’t seen browns this far north yet.”

“Well, Dave, I’m sure it’s exciting and scary to witness the changes. There are winners and losers but in the end we don’t know if we all lose.”

“Right. Striped bass and weakfish may benefit from the new food source, but other fish, shrimps, and crabs may need to move further north as winter flounder have done.”

Rutgers ecology professor Malin Pinsky, who works with the Marine and Coastal Sciences, has been studying the global change in ecology, particularly as a result of climate change. Since 1901 the North Atlantic region has warmed by two degrees. He has tracked fish movements of more than 350 North Atlantic species and found that they are correlated to localized temperature changes. Not only are we getting fish that seek cooler waters, but we are also losing local favorites that are seeking cooler waters, too.

Malin Pinsky is one of a group of scientists studying the socio-economic impacts on natural-resource-dependent communities of fish moving poleward. They are hoping their quantitative and qualitative analysis will help inform future adaptation strategies.

In the past I’ve spoken with Dr. Bushek about the rising water levels in the Maurice. Over the past 30 years there has been a major change at the Haskins dock in Bivalve, a section of the Maurice River near its entrance to the Delaware Bay. He suggested rising waters will first transition to hardwood swamps, then to upland forests and coastal communities. I imagine many villages will perish; some already have, like Bayside, Thompson’s Beach, Seabreeze, and most of Money Island. These communities in Cumberland County, New Jersey, have been hit hard by coastal flooding, high tides, and the world’s changing water levels.

The retreat of shoreline communities around the globe will cause massive displacement of populations. Property owners and other interested groups will have to grapple with difficult decisions. Coastal settlements have historically been major economic engines. Our fisheries, petroleum products, and transportation of goods are reliant on port areas. The enjoyment of our nation’s beaches has long been a crucial element in our coastal state’s economic well-being.

Many people wonder if we can adapt to the accelerated pace of coastal changes coupled with warming waters. Higher temperatures, as we have recently witnessed, intensify already-deadly storms. People have asked if we can continue to rebuild coastal communities. Sadly, retreat will continue to be a component of adaptation as waters rise.

The changes in fisheries present many challenges for fishermen and resource-reliant coastal communities. Seafood is an integral part of our diets. We already see shifts in the popularity of seafood varieties based on species availability. If we are to continue to enjoy fish as a staple, the industry and the agencies that regulate it will need many strategies to address climate and habitat changes.