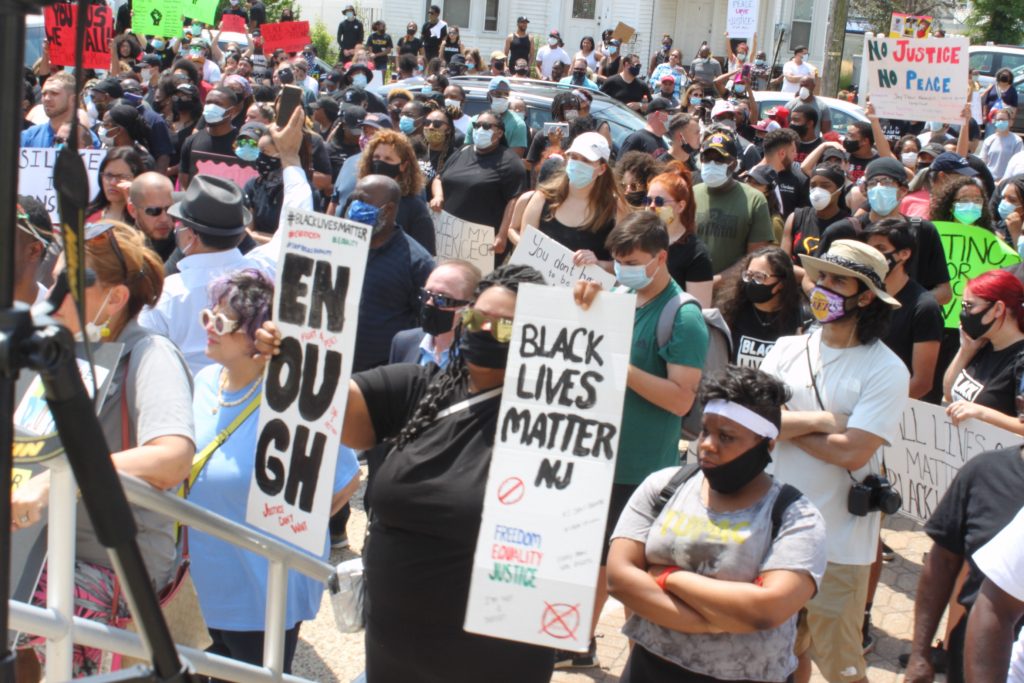 The young and the elderly. The rich and the poor. Police officers, prosecutors, and politicians. Christians, Jews, and Moors.

On Wednesday, June 10, in the city of Vineland, all of these people—who came from across Cumberland County—with different backgrounds and different life experiences, united as one, to march against injustice, inequality, and hatred.

The peaceful protest, which began at Vineland City Hall, made its way down Landis Avenue and ended at the former Sears parking lot.

The march was in response to the savage and senseless murder of George Floyd, as well as countless other people of color, who have died at the hands of law enforcement officials or faux vigilantes.

Local leaders organized this event in an effort to show unity and to create the atmosphere that will lead to a positive change for all of the city’s citizens.

“… We’re going to call it what it is,” said co-organizer of the event, Chris Wilson, while speaking to the protesters gathered on and around City Hall. “We know what it was. We want real reform and we have the people behind us that’s going to listen to us to make some things happen.”

One of those people Wilson was referring to was Vineland Mayor, Anthony Fanucci.

“We are here, we love you,” said Fanucci to the protestors, many of them holding up Black Lives Matter signs. “We are working together, we are walking together, and we are healing together today.

“And we pledge to move forward with true reform, open ears, and dialogue all the time.”

The history of violence and killings of people of African descent that have taken place in the United States for the last few centuries have many people at their wit’s end. Floyd’s murder may be the proverbial straw that broke the camel’s back.

“I am here today because we have to make a stand …,” said Rose Spencer, of Vineland. “For some reason they can’t realize that we are all one. They keep separating us by color and it’s not important at all.”

Spencer, who enjoyed the rainbow-colored representation of people who protested for justice and equality, spoke passionately about what she wants to see in the future.

“I have a great-grandson who is one year old,” she said, “and I don’t want him to have to be going through this when he finally becomes a black teenager [and a] young man.”

Sandy Forosisky and Russell Swanson were two local community leaders who participated in the march in memory of George Floyd as well as to support the divine concept of equality for all humanity.

“I think that if every community does this, then you’ll see systemic change,” said Forosisky, director of economic development with the City of Vineland.

“It takes each one of us, if you want to see change, to effect change,” said Swanson, executive director of VDID/Mainstreet Vineland.

Forosisky said she viewed the video of George Floyd’s murder several times and described it as painful and heart-wrenching to watch.

“With the power of that video, I mean anybody who denied that this was going on—you can’t,” she said. “You can’t look at that video and deny that there’s a problem. Not all, but there’s some bad ones.”

“I think it’s extraordinarily tragic what happened, but I think that if anything can come out of this good, in the memory of George Floyd, it’s going to be hope and change,” Swanson added. “I think that the peaceful protesters need to keep the gas pedal down, keep the pressure on, and we need to see change.”

Many protesters were adamant about the fact that they wanted change, not now, but right now.

“Enough is enough,” declared Jennifer Negron, who recently received her master’s degree in social work. “We’re sick and tired of the mass incarceration, the police brutality that ends up in countless murders, and we’re just tired of it. We’re here to stand with our people.”

Negron stated how she can use lessons she learned while earning her masters to help enlighten the world about the struggles of the oppressed, especially people of color.

“This is why I love social work. One of the core values is the dignity and worth of a person,” Negron explained. “So, exhibiting that, showing other people what that looks like—how you name people, how you call people, how you see the worth of an individual.

“Because sometimes I don’t understand why people … when they look at a black man or they look at the black community, they don’t look at all the beautiful. They look at, you know, mass incarcerations, crime rates, poverty. So, I think as an individual, that’s [how] I can help. I can use my education to show people that there’s much more than that.”

Will Turner, assistant principal at Fairfield Township School, in Bridgeton, talked about the mobilization of community leaders and policymakers taking place in Cumberland County.

“I think the people who are organizing in Vineland, Millville, and Bridgeton peacefully, have a plan for why they’re protesting,” said Turner. “And I think they’re not going to stop until a change is made. So, I think it’s going to be for the positive.”

Signs that read Black Lives Matter, End White Silence, Justice 4 All, and others were seen prominently throughout the peaceful march. Inspirational and motivational speeches were given to help uplift the protesters. The sounds of chants like No Justice No Peace seemed to echo and reverberate heavily in the air.

Dark clouds rushed in from the north and dropped rain so heavy, it prematurely ended the protest.

However, no rain could dampen the spirits of the peaceful protesters, who consisted of people from all different backgrounds with all different origin stories. The marchers braved a pandemic and the elements for one common cause—to fight for human rights and liberty and justice for all.

“This is a great march today and great representation and I’m so glad that I am able to be a part of it,” said Spencer.