Tree species native to the region, such as black cherry, are best for increasing survival of your Arbor Day plantings—and for healthy habitats. 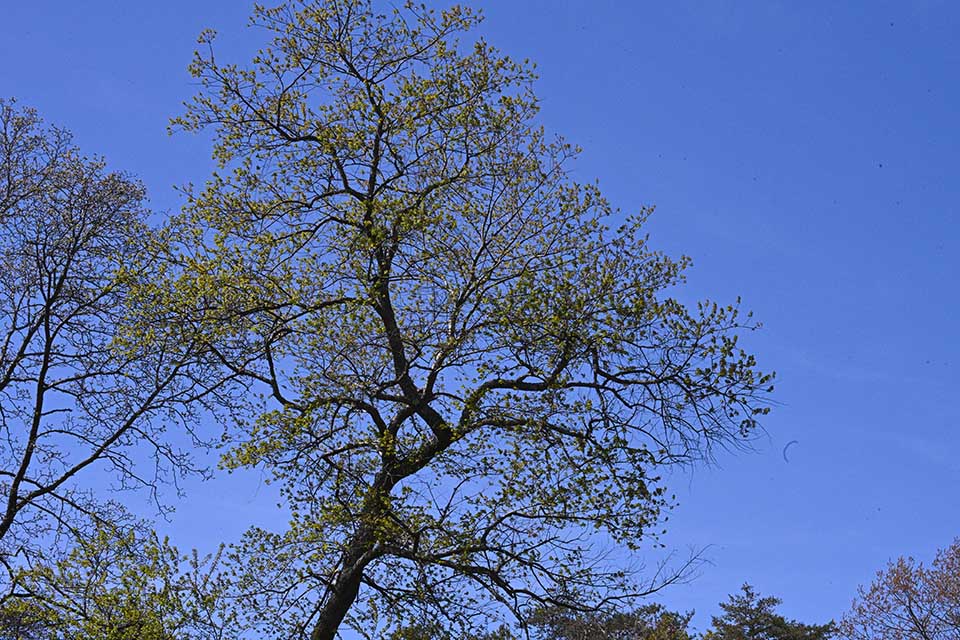 The top of this very large black cherry that grew in a clearing shows bended branches typical of the species.
by J. Morton Galetto, CU Maurice River

Last week we delved into the effects of deforestation—how a forest collectively protects soils and properties and how entire towns were buried in topsoil because the roots of trees no longer held the earth in place.

Arbor Day is just two days away but its roots, if you will pardon the pun, began in 1872 when a newspaper editor in Nebraska City, J. Sterling Morton, advocated to the State Board of Agriculture the establishment of a tree-planting day. On April 10, 1872 Nebraska celebrated the first Arbor Day; it is estimated that more than one million trees were planted. Two years later Nebraska officially instituted an Arbor Day, and by 1920, 45 states had followed suit. Today all 50 states celebrate this event. The Arbor Day Foundation points out that most holidays celebrate something that has happened, but the planting of a tree represents a hope for the future.

A successful sapling fulfills a promise for cleaner air and water, shade, a healthier community, habitat for wildlife and an aesthetic addition to the landscape. Using photosynthesis trees transform carbon dioxide into the oxygen we breathe. Physically trees filter dust and absorb pollutants from the air. Many trees have medicinal properties as well.

Our focus will be on some virtues of a single tree species—a fantastic native specimen, the black cherry.

When considering what tree to plant, stop and think—native. Why? Natives host complex microhabitats and have a specific synergy with our local species that non-native trees do not possess. Naturalists point out that the non-native Bradford Pear, at one point planted heavily by shade tree commissions, contributes to our biota about as much as a concrete lollipop. This is because our birds, insects, lichen, and fungi have evolved with native trees, and an exotic species will offer little to no benefits.

Insects in particular are specialists, having evolved to adapt to a plant’s natural defenses and to make use of only specific native fauna. This interdependence developed over eons and is difficult or impossible to achieve with exotics. In many instances people are drawn to exotics because they don’t get “damaged” by native insects. But the lack of competition is also what causes explosions of exotics like the tree of heaven or kudzu.

Let’s get into the virtues of black cherry, Prunus serotina. Its leaves support 456 butterfly and moth species. That’s a lot of caterpillars and happy well-fed chicks. And adult birds like the late summer fruit, which is eaten by 54 species of birds.

Black cherry, like redcedar, sweetgum, birches, poplars, and a number of others are considered pioneer trees because they are often the first to colonize disturbed areas after floods, clearcuts, fires, and the like. Open areas support the black cherry’s intolerance of shade. It tends to grow along forest edges because of its preference for light. I have seen huge trunks run parallel six feet above the ground for as much as 20 feet in search of the sun.

The bark of the cherry is dark slate colored, scaly, rough, and often has clumps of yellow sap. Cherries are also prone to burls, a formation caused by a disruption in growth hormones. The cause of the metabolic change is often a fungus, virus, or gall bacterium. Large ones are prized by woodturners for their unusual swirling patterns.

Cherry is an important tree for its lumber, chosen for fine furniture. The light red wood is highly prized and often used in veneers. Recently one that grew parallel to the ground on our forested property finally succumbed to the weight of gravity. My husband took it to a mill and it produced beautiful planks, one of which he made into a cheese and charcuterie board that is both artistic and useful.

Pine barren soils, typical of those found in much of southern New Jersey, tend to support shrubby or stunted growth. The black cherry is a fast-growing tree that otherwise reaches heights of 50 to 80 feet and occasionally 100 feet with a diameter of four feet. It is the largest of our native cherries.

Record trees are often referred to as specimen trees. There is a real allure to knowing the record trees in a region. New Jersey’s record black cherry, Prunus serotina, has a circumference of nine feet and stands proudly in Salem County, in the backyard of someone’s home in Pennsville off Harvey Court. (The NJDEP report is not dated so I’m not certain if the record still stands.)

Leaves are described as “alternate, simple, oblong-ovate, two to five inches long, 1–1 3/4 inches wide, long-pointed, finely serrate, base of leaf with one or more dark red conspicuous glands; dark green, smooth, and very shiny above; paler below with tufts of reddish hairs along midrib near leaf base…” (Trees of New Jersey).

In the spring when the leaves are half-grown the tree produces 1/3-inch flowers in a three- to four-inch pendulous cluster. These are followed by pea-sized fruit in late summer. Some folks complain about the stains from the fruit, but I would just advise not parking your car under a black cherry tree when the berries are dropping. And don’t be that person who complains about the fruit, chops the tree down, and then wonders why there aren’t any birds!

In the fall the leaves of the black cherry turn yellow and then to an intense magenta, adding a nice splash of color to the landscape. At some point my brown and white dog “Blue” rolls in the berries and is at long last indeed blue.

The fruit is a food source for people as well as birds. However the bark root and leaves contain glycoside prunasin (hydrocyanic acid), which is toxic. Jams are often made from the fruit but seeds should be avoided. I will admit to using some kind of grain alcohol that we bottled with the berries to make a homemade cordial. I can’t attest to the safety of such a practice, but we are still here some 30 years later to relay the information.

Glycoside is used in medicines, but again it is toxic and intended for use by experts. In case that is not discouragement enough, the symptoms of hydrocyanic acid poisoning include difficulty breathing, loss of balance, and convulsions. Traditional medicinal uses involve the collection of bark and berries in autumn, making a decoction given as a sedative for colds, fevers, worms, burns, measles, and thrush. American pioneers used it for diarrhea, bronchitis, coughs, and indigestion. Modern practices are the same but the effectiveness is questionable. Ricola cherry flavored cough drops remain a popular selection (J. Meuninck).

In summation I encourage the planting of black cherry as a tried-and-true tree. Furthermore, with Arbor Day upon us I promised in my last article to provide you with my great-uncle Dick’s poem, which has been read at Arbor Day celebrations around our country. I hope it inspires some of you to plant a native tree of your choosing.

PrevPreviousIs it time to to replace your door?
NextVineland Dispensary One of 13 in State Selling Recreation-Use MarijuanaNext