Sweet pepperbush scents our Jersey woods from now through September with its sweet, spicy fragrance. 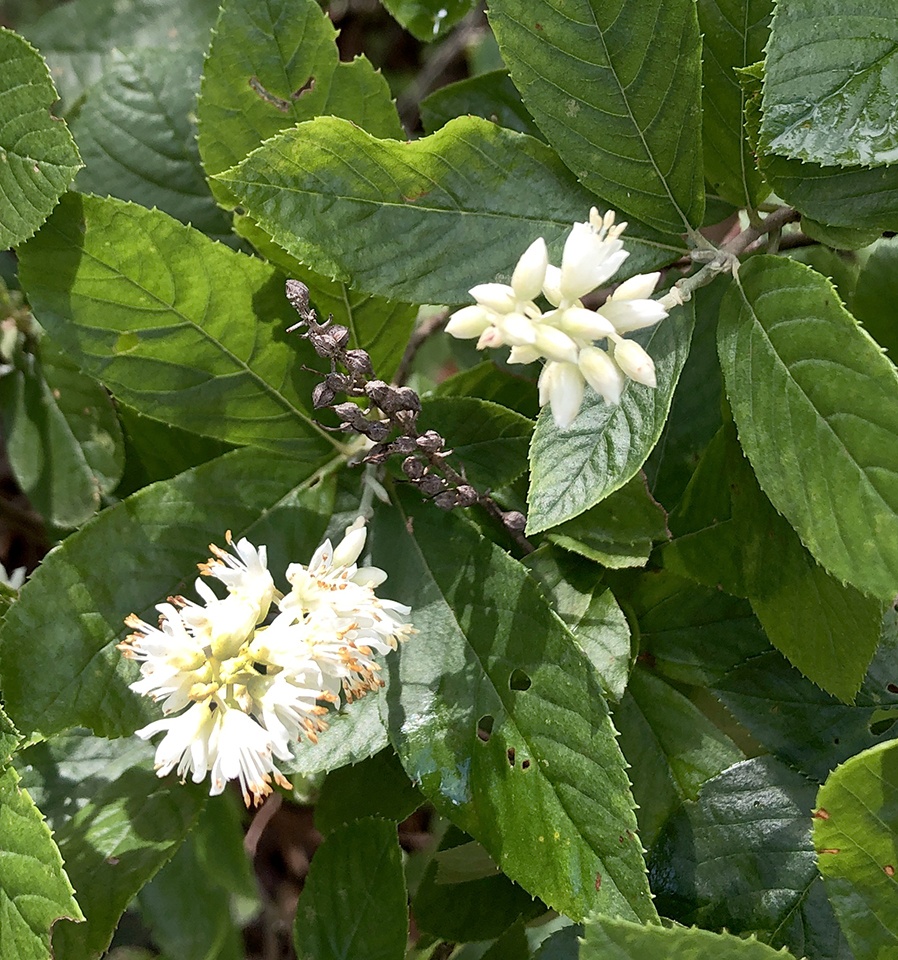 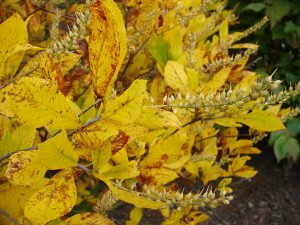 The first week of August my husband Peter and I went for a 10-mile bicycle ride through Belleplain State Forest just outside of Woodbine. The flat, newly paved shaded roads and lack of traffic make peddling a pleasure. If you are into off-road travel there are a number of paths especially made for all-terrain bicycles. I’ll admit to being simply happy to stay upright in the saddle.

Belleplain covers 21,254 acres just south of the Pine Barrens. The soil conditions make it less prone to fire than the Barrens, and they support young pine, oaks, red maple, and Atlantic white cedar. Meisle Cranberry Bog was converted by the Civilian Conservation Corps into what is now Lake Nummy, a popular swimming, boating, and fishing area. Current pandemic restrictions have the lake closed, so if your visit includes water access it would be best to call the park office for advice. There are campsites for various outdoor setups, too.

We stopped at the office parking lot just off Route 550 and then exited right to go south on Henkinsifkin Road. There we were greeted with the sweet spicy fragrance of Clethra alnifolia, or what most locals call sweet pepperbush. It is also known as coastal sweet pepperbush, summer-sweet, poorman’s soap, soapbush, and white alder. The multiple number of common names that people use for plants is the reason botanists use the scientific name, to keep everyone on the same page, but I’ll refer to it as Clethra alnifolia or sweet pepperbush.

It blooms profusely in our area from July to September. The flower clusters can last up to six weeks in the heat of summer that other flowering shrubs can’t tolerate, making them a real forest understory show-stealer. Our jaunt caught it in the height of bloom. Along Henkinsifkin the foliage of sweet pepperbush made a dense understory and the creamy blossoms produced a spike-like cluster that dotted the landscape. We passed a number of other visitors who were remarking on the fragrant air.

Horticulturalists, botanists, and wildlife biologists all extol the plant’s many strong points. It is hardy and not subject to disease, although in dry hot weather spider mites can be a problem. It will grow in full sun or shade but prefers partial shade. Sometimes controlled burns are used to decrease its ability to add fuel to forest fires. Its root mass is kept intact and the shrub remains viable even after the plant is burnt down.

It is a great source of nectar for pollinators, hummingbirds, and butterflies. At least two moths use it as a host plant—large lace border and unicorn caterpillar. Shrub-nesting birds make use of this understory plant. Birds, small mammals, and other wildlife eat the seeds that persist in clusters of capsules left by the inflorescence. The inflorescence or flower cluster is called a raceme; it is white and varies from three to six inches in length and gives a spike-like appearance. Deer are not especially fond of the shrub and eat it only if other vegetation is in short supply. It is referred to as “deer-resistant,” not to be mistaken for deer-proof. This attribute makes it a gardener’s favorite in areas with high deer populations.

Clethra alnifolia is in the family Clethraceae or white alder. Its leaves are alternate, meaning they attach not opposite each other on the branch but staggered. The three basic leaf arrangements are opposite, alternate, and whorled. Whorled, as the name suggests, describes three or more leaves all equally spaced at the same node. The leaves of the sweet pepperbush are dark green, shiny, and eye-shaped, narrowing at the petiole with finely toothed margins beginning mid-leaf to the tip. The petiole is the stalk that attaches a leaf to the stem. The bark has a wide range of descriptions—reddish or reddish orange, with older branches gray, striped, smooth, to peeling outer scales. In New Jersey, depending on conditions, the bush can grow from four to 10 feet tall.

Plants grow in conjunction with others because of soil types, in this case sandy acidic soils that are seasonally moist. Common “tree associates” include red maple, sweetgum, blackgum, Atlantic white-cedar, magnolias, beech, and pitch pine. Clethra leafs out in the spring, blooms in late summer, develops its brown seed capsules in the fall, and then its autumn foliage, a golden yellow, is shed and new growth appears in the spring.

Clethra alnifolia spreads by rhizomes and seed dispersal. Rhizomes are essentially rootstalks that grow horizontally, spreading a plant’s reach beneath the ground. If you plant it you have to expect it to travel unless you cut off these shoots. Root creeping is not uncommon; other shrubs that come immediately to mind are mountain laurel and Virginia sweetspire. This can be a useful attribute when the shrub is planted in the right place, as in a damp woodland or rain garden. It is also recommended for erosion control in moist soils. Birds are a main component in distribution; eating and then passing seeds through their digestive system spreads seeds.

Sweet pepperbush grows in sandy soils and seasonally flooded areas, making it a familiar shrub in the Coastal Plain and Pine Barrens of New Jersey. The common name “coastal” sweet pepperbush is suitable in that it grows along the Atlantic coastal plain from Maine to Florida and west to Texas. Its movement west is very limited, since it occurs only in Pennsylvania, New York, and Tennessee. It handles coastal habitat well, tolerating salty mists.

Nicknames including “soap” relate to lore about the sudsing nature of the blossom when mixed with water. Many naturalists relay that Native Americans and colonists used it for cleaning, and further that the dried seeds that are so diagnostic of the plant in winter were used by colonists as a poor man’s pepper. I found no reliable documentation of either, and would welcome readers who find trustworthy sources.

The bush is common along the Maurice River near our home. I transplanted some next to a pond feature that we installed a few decades ago. The pond has an overflow to create a small wetland where Clethra extends its roots in search of water. For about five years it never exceeded two feet, and then it really took off. We prune it back to about four to five feet and it seems very healthy. It tolerates pruning and some folks use it for a hedge.

This native is showy when other blooms are not present. It attracts wildlife and pollinators. It tolerates clay and wet soils. Clethra grows in most light conditions but prefers a mix of sun and shade. It is primarily disease tolerant. As a native, once established it shouldn’t need to be watered. Most people really like its fragrance. Buy it at an indigenous plant nursery or get a rootstalk from a friend’s garden. There are a lot of cultivars but I heartily encourage going native. You’ll be glad you did.