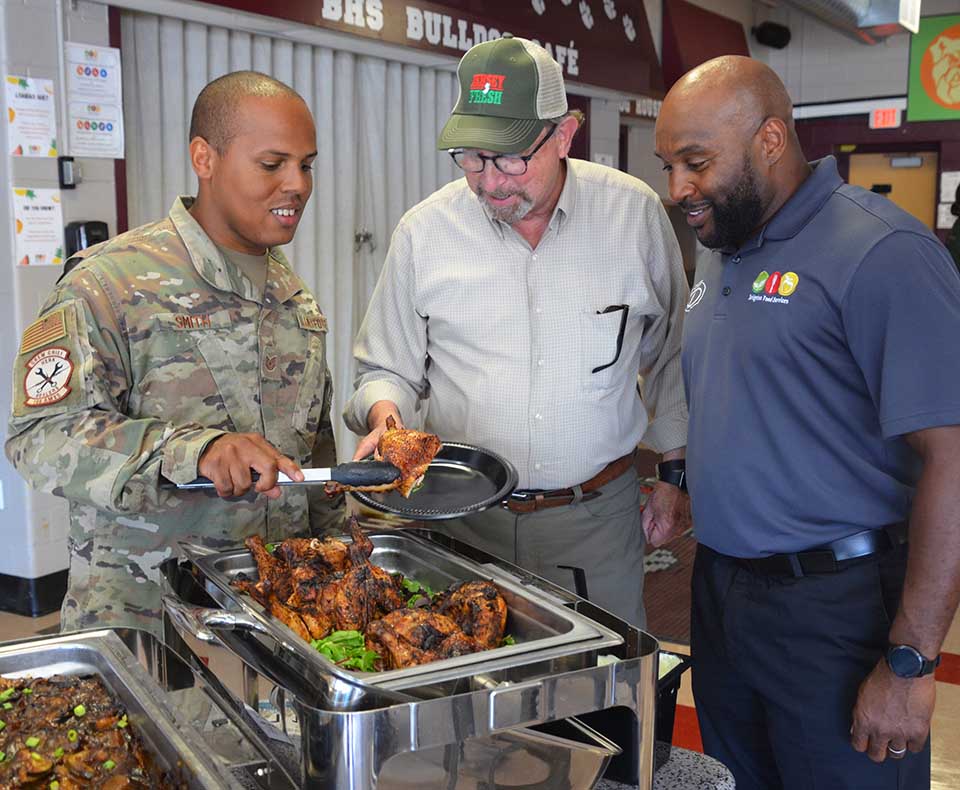 Earlier this year, Bridgeton’s Broad Street School started something new. It was Friday and the usual slices of pizza lined the counter, as they do at most schools.

But when seventh graders entered the doors of the school cafeteria, they broke into a run—past the slices and headed straight for the salad bar, which was brimming with sliced cucumbers, cherry tomatoes, red onions, arugula, and blueberries.

Farm-to-school meals have arrived at one Cumberland County school district, courtesy of a new program called the Local Foods Incentive Pilot, which is operated by a Philadelphia-based organization called The Common Market, a nonprofit local food distributor. The group’s pilot program started in April in two test spots—Bridgeton and Camden. It will be up and running again when the new school year starts.

The goal is a lofty one: Feed high-quality, locally produced goods to students in meals cooked from scratch, support local farms by paying fair prices for produce and proteins, and feed the local and state economy in the process.

Warren DeShields, director of food services for Bridgeton Public Schools, also served on the board of The Common Market as part of his ongoing goal to increase students’ access to fresh produce.

“And when I heard that they were doing the program [in Camden], I said ‘Wait a second! Wait a second!’ ” and he worked with the school board and the City of Bridgeton Mayor Albert Kelly to get funding and allow the district to join the pilot program.

The program uses 17 family farmers and producers across the state, including several from Cumberland County such as Fralinger Farms of Bridgeton for peaches, Buster Petronglo & Son Farms in Vineland for spinach, green beans, cabbage, collards, kale, broccoli, and herbs, as well as many other farms. Blueberries come from Hammonton’s Blueberry Bill Farms, while asparagus, sweet potatoes, peppers, squash and more come from Dante Spina & Sons in Salem.

On its website, The Common Market says it has, as of 2021, distributed $70 million in local foods from more than 300 family farms. It’s sent to more than 1,800 schools, hospitals, eldercare facilities and other locations.

“We’re trying to do as much as possible to inspire our students and support our farmers,” said DeShields.

As of the end of July, The Common Market has delivered more than 29,000 pounds of food to Bridgeton and Camden.

Douglas H. Fisher, New Jersey Secretary of Agriculture, paid a visit to the program at Bridgeton High School recently, where he sampled a meal of barbecued chicken, Jersey corn, tomatoes, and grilled peaches. He also toured the school’s greenhouse and hydroponics facility.

“What you are doing is extraordinary,” Fisher said. “I expect big things from this pilot.”

Attracting the attention of the legislature in Trenton is also a goal of everyone involved in the program.

“Giving our students access to fresh, healthy food grown by family farms right here in New Jersey, even through the summer months, enriches the school food experience and fosters good health and prosperous futures for our students,” DeShields added.

This year, Bridgeton’s pilot program is expanding to include protein through Smith Poultry, located in Williamstown.

Kyle Smith, a veteran, owns Smith Poultry, which provides pasture-raised chicken and turkey to the school. Smith started the farm after losing his body shop job in 2005. He operates one of two Black-owned farms that have contributed to school meal programs through the pilot.

Smith has already received an order from DeShields for 1,500 pounds of poultry for a special Farm-to-School Week he is planning in September at the high school. DeShields is also set to serve tostadas using ground turkey from Smith’s farm for Hispanic Heritage Month.

Along with introducing the district’s first salad bars, the program will allow DeShields and his school menu planner Allison Metelow the opportunity to provide a seasonal approach to its school menus. It will celebrate the best of what each season can produce.

He said the district will start the school year with summer crops, which should stretch into part of October. From there, they will introduce the kids to fall vegetables.

Since we live in the Garden State, it should be an easy thing to connect the dots between South Jersey farms and the hungry mouths of its students. It isn’t.

Turns out, the process of providing high quality produce and proteins to students involves an intricate support structure of endless paperwork, funding issues, distribution challenges, connections and coordination with local farms and supply issues. “It takes an amalgam of a whole lot of folks to get fresh food into the school,” Fisher agreed.

Tegan Hagy, a farm-to-school consultant at The Common Market, said she hopes Trenton politicians notice the effort. “What we really want to see happen is policy,” she said. “It’s a triple win.”

It supports the state economy, plus money spent stays in the community and the students can “eat the rainbow” by enjoying local fruits and vegetables. Local farmers and producers such as Smith are paid fair market rate—not a cut price. Schools are good customers because their food needs are not subject to the wide fluctuations sometimes experienced by the restaurant business.

“It’s helping sustain their farms. It’s demonstrating that schools can be a sustainable market,” Hagy said.

DeShields and staff members in the schools have loved seeing students enthusiastically lining up for fresh food. The district, of course, also uses the fresh food to teach lessons in healthy eating. Lessons were introduced earlier in the year among third and fifth graders, teaching them how to use a salad bar, including how to use tongs and not to take too much, said Jenny Reed, who is part of the school’s food service department. Students are encouraged to try something new, a chopped radish, for example. If it’s not their favorite, try it again with a little bit of dressing. Sometimes, that is all it takes, he said. Some of the students are even eating the salads dry, without any dressing at all.

The excitement that started in April is expected to carry over when school is back in session. Hagy recalled the level of excitement on the first day the salad bar was introduced. “A huge part of it is they get to choose what they want,” she said.

The pilot will help spread the value of local, highly nutritious meals, according to Rachel Terry, The Common Market’s national partnerships director.

“This is a win-win for everyone,” DeShields said.