It’s National Pickleball Month, time to learn all about the game and some local enthusiasts. 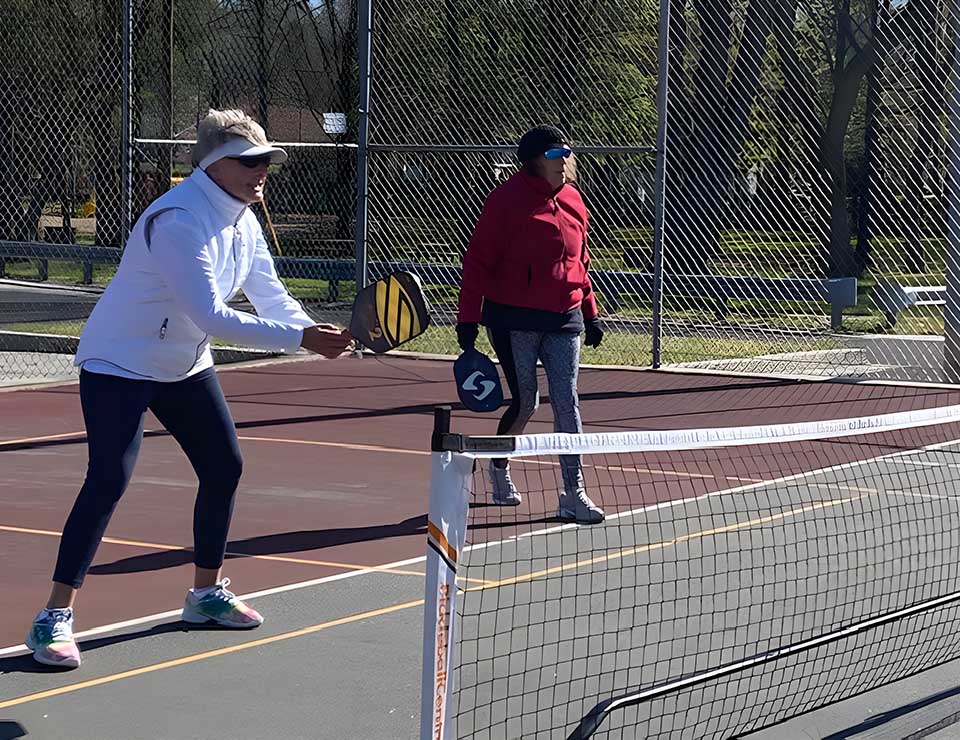 It has a fun name. The description is fun too: “It’s like playing ping pong standing on the table,” says Dave Redman, who oversees a group that plays indoors in Faith Bible Church’s Family Life Center. The court is smaller than a tennis court, players play with paddles, and the ball most resembles a whiffle ball.

“It is all about finesse and touch,” Redman says. “It’s less about power than about ball placement.”

It’s easy for those across a wide range of ages to learn and play pickleball. Because of this, it is one of the fastest growing sports, coast to coast. I saw pickleball players last week in Venice Beach, California; their courts are adjacent to the Muscle Beach outdoor weightlifting area and down the path from the skatepark. Washington State, where it was invented about 50 years ago by three dads trying to entertain their kids on Bainbridge Island, recently declared it the state sport. In Vineland locals gather to play pickleball both indoors and outdoors almost every day of the week.

Vinelander Ann Peterson, a USA Pickleball Ambassador, explains that her intensive, non-paying job is to help grow pickleball in the area. She has certainly done that. In just over six years, the Vineland Picklers have grown both in number of players and frequency of games. Peterson was introduced to the sport at Inspira’s Fitness Connection.

“They had an Active Aging Week in October. On Thursday it was pickleball. I was not familiar with it, but I thought I’d go and I signed up for it,” she said.

Peterson was hooked from the beginning. “I thought, ‘Man, this is a lot of fun.’ ” She started playing on a single pickleball court behind the hospital. “Snowbirds who’d learned to play in Florida came,” she says. “More people started to show up and play. That handful got bigger and bigger until it was about 60 people.”

After playing at Pagluighi Park on Magnolia Road for several years, the Picklers now play on four courts at CCTEC unless those courts are unavailable. That was the case last week; the group pivoted quickly and met up at Pagluighi without a hiccup.

It was a brisk day, but Peterson says they play outside year-round, only canceling when the courts are too slippery to be safe.

“Pickleball is a great sport for all ages,” Peterson notes. “Grandparents can play with their grandchildren. You can’t say that about a lot of sports.”

It also lends itself to good sportsmanship. “We usually play doubles,” she says. “You are close to people you are playing with, so there’s interaction, a lot of laughter. We congratulate the other people if they make a good shot. There is camaraderie. Most people who play it really love it.”

They are also welcoming; they were ready to teach me how to serve—underhand—and the short list of rules.

Peterson is all about training. She is just home from a three-day pickleball camp held in Hilton Head, South Carolina. She took eight of her “girls” with her.

“One thing we learned from the pro is, ‘It’s an easy game to learn, but it’s difficult to master.’ It is a game of strategy,” she explains.

“Its name is a reference to the non-starters—those leftover rowers who would race for fun in local ‘pickle boat’ crew competitions,” Peterson says.

Though that might sound disparaging, those pickle boat crew teams probably enjoy their race much like the pickleball players enjoy the game; they discover that recreational sports can be competitive enough to be fun.

Pickleball has been meeting at Faith Bible Church for about four years. Dave Redman appreciates that they can offer it to high school age and up; players can play into their 70s. He himself hovers in the middle of that range. He also likes that the game is co-ed. He and his wife enjoy playing together.

“We walk together, but this is the first sport we can do together,” he said. “Some couples come out. Sometimes just a husband or a wife. My nephew, who is a junior in high school, and my niece who is a freshman, they come—so you can do it with extended family. It’s been a personal blessing. You meet people you wouldn’t have met. Frank, who is 76, always says thanks so much for having us out. You can tell there is a lot of gratitude there.”

Redman first played at Word of Life Family Camp in upstate New York. “The older people who played pickleball marked up tennis courts,” he recalls. “We played there. When my son came back, he saw in the paper about the Vineland Picklers.” Both Redman, and his son, Andrew, played with Peterson’s team.

“That group had no place to play in the winter,” he says. “Our pastors loved the idea. At first we just taped off the courts with painter’s tape. But Pastor J (Jason Parmer) put down permanent lines for us. We have three courts in the gym.”

They play at the church on Friday evenings and every other Monday evening. Players need a paddle to play and there is a Sign up Genuis so that they can form rotations.

“Each court has four people at a time, so that is 12 playing,” Redman explains. “Two are waiting for each court, so we have 18 slots.”

All the games at the church are doubles. “We play Round Robin, so you get to know everybody.” Pickleball is also played in singles, “but that is for the young guys,” he says.

Redman says they have run two clinics so far, one for beginners and one for advanced play. “People come out and some have natural abilities,” he notes.

He explains some of the rules: “We play to 11. You have to win by 2. You must be serving to score. Both players on the side serve. You keep the serve if you score.”

The Family Life Center is packed most nights between a rotation of pickleball, men’s and women’s volleyball, a basketball league, kids’ soccer and youth group. Pickleball is the newest sport and there is no charge to play.

“It is just to be an outreach for these folks,” Redman says. “It’s been great connectivity and community.”