Set a reading routine and be transported. 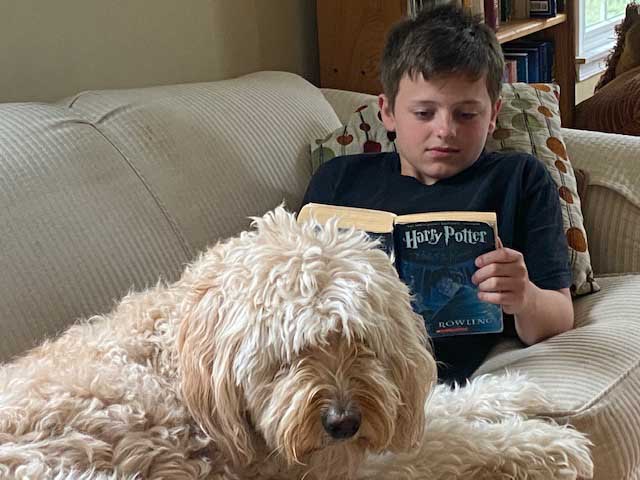 It’s Summer Reading Time so I set the timer for 35 minutes. I claim the big, comfy chair; boys are scattered on couches and chairs, each with a book. For one of them, the time stretches slowly. I issue multiple reminders to keep quiet. He checks the timer every few pages.

I am thick into The Alice Network by Kate Quinn; for me, the timer provides restraint on my tendency to abandon other plans when caught in a good book. In moments I have disappeared into a story that alternates between WWI, where I work alongside the female spies in German-occupied France, and post-WWII France as I help track down a missing cousin. The main story is based on real women who were bravely part of the French resistance. It’s my book club selection and I enjoy being an armchair explorer, learning while transported in both time and place.

This is my second Kate Quinn novel. My niece passed me her hefty hardback, The Diamond Eye, while we were traveling together in Europe. I’d been determined to pack light but the book was worth its added weight. I spent the return flight with Mila Pavilchenko, a female Russian sniper during WWII. For me, reading is a way to learn by walking in someone else’s shoes.

I certainly appreciated that about another book I just finished, I’ll Scream Later by Marlee Matlin. I was a big fan before, but now I feel connected to her in a whole new way. Her memoir was a gift from my son, who is friends with Matlin’s daughter. He has met Matlin several times and she inscribed it to me. What a delight! I finished it in just a few days. Between readings, I found myself thinking what it would be like to be deaf. Matlin is an incredible advocate for the deaf community; she was instrumental in key legislation like mandating TV closed captioning and her movies and TV shows build awareness. Her characters have grit; and her memoir is the same way. Parts of it are gut-wrenching; parts of it are funny—the whole is honest, raw, and redemptive. And as a fan, I thought about what it would be like to move among the Hollywood elite. I loved Matlin in Children of a Lesser God, which won her an Oscar for Best Actress. Her performance as the mom in CODA (2021), which won the Academy Award for Best Picture, also got her a Screen Actors Guild Award. Yet, those are just two of her many roles and awards. It was cool to spend mornings sipping my coffee with this gutsy, vibrant actress.

It is to P.J. Wodehouse’s world of British nobility that I return between heavier novels, a sorbet between courses. He’s the witty creator of the famous butler, Jeeves. I am working my way through a series of the books; Very Good, Jeeves is next.

My daughter, a Temple University undergrad, is far past needing a timer mandate to read. Also a bookworm, she is enjoying Deacon King Kong by James McBride, a book I passed on to her. I disappeared into his jazzy descriptive language. McBride’s novel has weighty inner-city issues, set in 1960s Brooklyn in an African American community struggling with drug dealers among other threats to the community. But the tempo, memorable characters, and funny dialogue balance out the tragic tale. There is hope there.

My youngest boy, pictured above, is reading the thickest book. He’s plowing through Harry Potter and the Order of the Phoenix, the fifth in the series. He doesn’t look up when the timer goes off—he’d be on the first train to Hogwarts. The Lightning Thief by Rick Riordan, the first in the Percy Jackson series, has another boy at Camp Half-Blood, a modern tale with Greek gods. A third boy is on an adventure in Wisconsin in the 1800s with Caddie Woodlawn by Carol Ryrie Brink, as the main character helps to avert disaster between Native Americans and pioneers. It’s a family favorite.

More than what they are reading, I am just so excited they are reading. Of course, I am forcing them. It is good for all the usual reasons—brain development, learning ability, empathy, adventure. But it is also a way to gather my ducklings, who have gotten too big too fast, and scatter quickly. Far too soon, the timer breaks the spell, and we return from the settings to which we were transported…until next time.