Help the home team—CU Fish Hawks—as they participate in the World Series of Birding, raising funds for nature programs in our region. 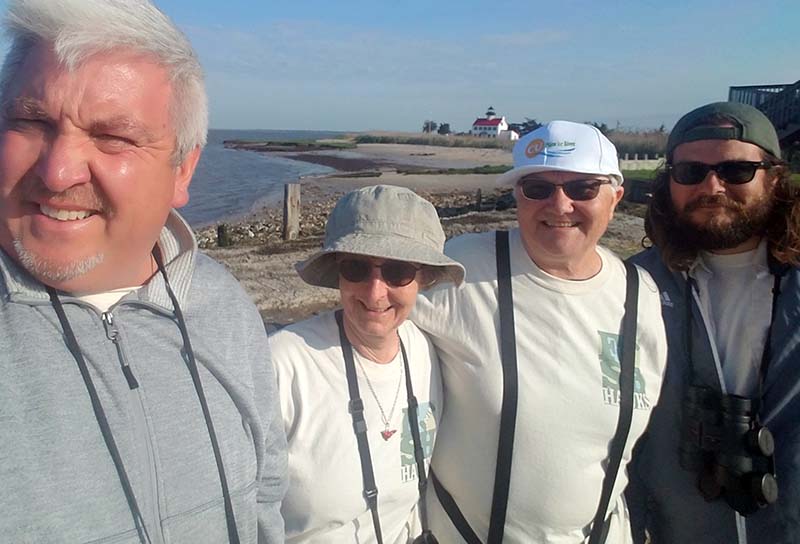 Sometime prior to 1984, famed birder and Down Jersey resident Pete Dunne came up with the idea of a massive birding competition—a spring fling of sorts—celebrating the return of many species to our region from southern climes. May is the height of spring migration as the number of species that either nest here or go onward to places north to breed are added to our year-round residents for a huge birding bonanza.

The first competition was held in 1984 and the winning team was made up of five of our nation’s most notable avian observers. Dunne and Roger Tory Peterson were on the team, aas well as David Sibley. Like Peterson, Sibley has written many acclaimed guides to birds. Rounding out the team—author Bill Boyle and naturalist Pete Bacinski, who directed NJ Audubon’s Center at Sandy Hook. They collectively searched New Jersey for as many species as they could identify in a 24-hour period, and topped out at 201 for their historic win that began a decades-old event.

This year marks the 38th annual competition, beginning at 12:01 midnight on Saturday, May 8, and ending the following midnight. Birders simply refer to the World Series of Birding as “The Big Day.”

In general the rules call for a team to remain together and identify birds as a group either by sighting or hearing the species; they must all be in agreement regarding the identification. They can receive no help the day of the competition and they’re on the honor system. Doing well on “The Big Day” is a feather in a team’s cap, so serious birders tackle the search with gusto.

As a result of COVID the rules have been amended to include areas beyond the borders of New Jersey. Territories for searching will encompass the Atlantic Flyway so as to include people from other states and accommodate travel restrictions. In “normal” times people come from far and wide to participate, even from other countries! This year NJ Audubon is calling the competition “Special Edition II.” The added states are Connecticut, Delaware, Florida, Georgia, Maine, Maryland, Massachusetts, New Hampshire, New York, North Carolina, Pennsylvania, Rhode Island, South Carolina, Vermont, Virginia, and West Virginia, as well as District of Columbia, Puerto Rico, and the U.S. Virgin Islands.

Last year’s rules were unusual as well. Because of the pandemic people had to travel in separate cars and stay within a 10-mile radius of their homes, so the precept for collective agreement on identification had to be modified. Depending on the geographic make-up of the team many people couldn’t bird with their teammates. On some teams, members had radiuses that overlapped and they rendezvoused at these intersecting points (masked and maintaining distance, of course).

Birds are allowed to be called but participants may only utilize their voices; no mechanical or technological means may be employed. Before the contest offered different geographic regions, everyone competed against teams that could search the entire state. One story from those early years involves calling birds: The Great Swamp National Wildlife Refuge was a common spot to listen for barred owls. However, enough people converged there that evidently some birders were tallying other birders’ calls! Clearly some folks are especially talented at imitating barred owls.

Teams are affiliated with various conservation organizations. Competitors and the organizations they represent raise dollars for their individual causes/missions. Some ace teams like Cornell’s Lab of Ornithology send scouts to look for hard-to-find species prior to the event. Many environmental non-profits annually realize $5,000 to $15,000 from their diligent fundraising efforts. New Jersey Audubon raised $250,000 in 2020, $15,000 more than in the previous years! Staff suspected that people were looking for outdoor activities that were suitable during the pandemic. This year everyone also has positive expectations, since outside activities are continuing to draw great public interest.

In 2019, the last “normal year,” our team competed against people who searched the entire state. There are limited geography categories that include specific counties, but our team—“The CU Fish Hawks”—likes to show how many birds there are in the region along the Delaware Bayshore where we do most of our conservation and awareness efforts, highlighting the richness of our species diversity. Because they cover two to three counties they can’t compete in the county competition, so their species count is in the statewide category. Working against teams that covered the entire state they came in fourth, with 144 species. Last year our team identified 151 species. The top three teams had totals of 207, 180, and 167.

With many kinds of territories and combinations of possibilities, one of my favorite categories is the “Big Stay.” These teams don’t move, so choosing a super birding location is paramount to winning. The “Big Stay” winner in 2019 was from a Spring Watch Platform, south of Cape May State Park and off Coral Avenue, that tallied 115 species. There are also senior challenges and youth groups and lots more.

Making comparisons between Special Edition I & II is not really possible since so many modifications have been adopted. But it won’t keep lots of data from being gathered or lots of dollars for conservation organizations from being raised.

New Jersey Audubon Society (NJAS)always has many great teams supporting their organization. Conservation groups from around New Jersey, and other states too, will pay entrance fees to NJAS, which orchestrates this massive undertaking.

Our organization, CU Maurice River, first competed in 2007 and 2008 and we’ve had a team every year since 2012. The dollars we raise go toward our avian programs like bluebird boxes, osprey platforms, wood duck houses, and purple martin gourds. Funds also support our mission of raising awareness in the general public about the national and international importance of our Down Jersey region.

All the members of our team are teachers. This year’s team captain is Mary Watkins, who is a naturalist for both CU and NJ Audubon. She has sung opera and taught music. Mary has an amazing ear for bird calls and makes a serious avocation out of studying birds.

Tony Klock is an educator at Kresson Elementary School who enriches his students’ studies with outdoor curricula and nature study. He is a CU naturalist and enjoys gardening, plant study, butterflies, dragonflies, and observing nature. You can follow him and his amazing photographic journeys with nature on Instagram @tkportnorris.

Kathy Michele, D.V.M., is associate dean of education at Penn Veterinary and a professor of veterinary science. Her love of nature, birds, and conservation spurs her on as one of the area’s most enthusiastic birders. She and Tony often lead birding sails on the AJ Meerwald and our annual Hansey Creek Road walk, held the weekend after the World Series.

Completing the team is teacher naturalist Jim Blumenstein, a social studies teacher at Sterling High School in Somerdale. He loves connecting his students to history and nature through outdoor activities that facilitate a deeper understanding and appreciation of our connection to the past. Over the years he has brought students to “Down Jersey” as part of their annual curriculum. He is clearly a fan of the Bayshore.

I would like to encourage you to support our team and our mission by making a donation to the nonprofit CU Maurice River. If you have been a regular reader of this column you have some insight into the kind of information and activities we provide to our community. We’d love to have you on board!