Vineland’s annual dandelion dinner is a local rite of spring that celebrates our agricultural roots here in the ‘Dandelion Capital of the World.’

“It’s always been a source of pride for the Greater Vineland Chamber of Commerce to host this event as it represents a celebration of our agricultural history and our current strong agricultural economy in the area,” Dawn Hunter, executive director of the Vineland Chamber, said recently of the organization that sponsors the current incarnation of the Dandelion Dinner.

The idea of such a meal dates back to a March 8, 1973 luncheon suggested by county Agricultural Agent Norman Smith to recognize Cumberland County’s large dandelion crop. That lunch became the centerpiece of a month-long county celebration of the dandelion. 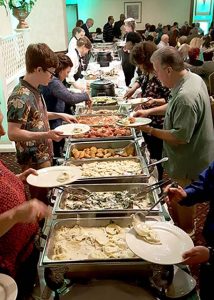 The Thursday afternoon gathering, held at Merighi’s Savoy Inn and co-sponsored by the Cumberland County Board of Freeholders and County Agricultural Extension, concluded with a screening of films about South Jersey agriculture and a tour of the county’s dandelion fields and vegetable farms.

The next several years witnessed a gradual decline of the event until, in 1977, Vineland Mayor Patrick Fiorilli streamlined the festival into a dinner and launched a successful marketing campaign that drew global attention to Vineland, the now self-proclaimed “Dandelion Capital of the World.” Coverage of the event could be found on the CBS Evening News and in the pages of National Geographic and the New York Times, which referred to Fiorilli as “an unofficial dandelion authority.”

As many as 250 people were attending the dinner annually and, for those who wanted to enjoy such delicacies at home, Vineland’s mayor published a cookbook.

Fiorilli’s mayoral duties ended in 1984 but, two years later, the New York Times reported on Vineland’s dandelion production, citing it as “a valuable agricultural crop that brings about $300,000 to $400,000 a year to the area.”

By the close of the 1980s, however, interest in the dinner had waned. Its revival in 1994 was achieved through the efforts of the Vineland Chamber, which turned over its sponsorship of the dinner to the Miss Vineland Scholarship Pageant in 1997. That year, the New York Times revisited Vineland on the eve of its dandelion celebration, telling its readers that the previous year, “Vineland farmers sold 450,000 pounds of dandelions.”

By the time the Vineland Chamber resumed sponsorship of the event in 2001, the Cumberland News reported that the dandelion crop in Cumberland County accounted for about $270,000 of yearly sales. 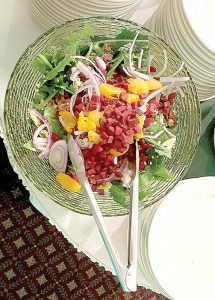 The local popularity and economic boom of this common lawn weed, known scientifically as Taraxacum and referred to as “harmless gold” by poet James Russell Lowell, was once unknown in North America. It is believed the dandelion arrived on these shores with the Mayflower in 1620. Europeans transported their needed herbs and cures, and it wasn’t long before the weed that now plagues the lawns of early spring was migrating west, serving as the key ingredient for spring tonics used by frontier healers and a source of vitamins for pioneer families.

The curative powers of the dandelion had been known since ancient times. It served as a medical remedy for liver and gallbladder ailments as well as gout. The first recorded reference of its medicinal use dates to the work of Arabian physicians in the 10th century and Welsh doctors in the 13th century. It’s believed the Chinese had been using its healing qualities even earlier.

Like their European counterparts in France and Germany, Vineland farmers began cultivating dandelions so that by 1973, according to an Associated Press article, this area had “about 50 farmers…on plots of an acre or acre and a half” harvesting dandelion greens that “fetch several hundred thousand greens with dollar signs.”

But profits that were forthcoming in the late 20th century have since declined. Hunter explained that she is “currently searching for any local farms selling dandelion. Unfortunately, it seems to no longer be a viable crop. I’ve been told that it is too labor intensive to grow for the return on investment. The couple of farms that I was aware of that sold it previously, no longer do.”

Despite the fate of local dandelion crops, Vineland’s annual dinner event continues to draw interest. Throughout the first decade of the new century, yearly attendance reportedly ranged from 200 to 300 people. Since 2009, the event has had an attendance “in the range of 350 people,” Hunter said, with numbers reaching 450 in recent years. 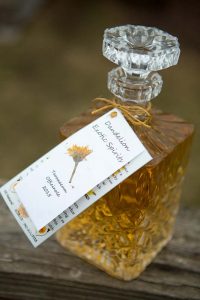 Dandelion omelets and other fare from 1973, however, have changed over time, replaced by Chicken Florentine stuffed with dandelion and other dishes containing dandelion pesto sauce and dandelion sausage. Drinks like dandelion juice cocktails and dandelion wine have been abandoned and beer added to the menu, precipitating another change in the event’s name, the Dandelion Dinner and Beer Tasting.

“For any event to remain vibrant and able to attract attendees,” Hunter said, “I believe you have to change it up. We revised the event name about 10 years ago to the Dandelion Dinner and Beer Tasting event because the word ‘festival’ was misleading to many people. They thought we would have craft vendors and it was outdoors, etc.”

Hunter revealed that the pandemic, which has put the dinner on hold for 2020 and 2021, also delayed the debut of a new title. “We had planned to change the name once again in 2020, adding some other features to the event, but that will have to wait,” she explained. “I’m confident we’ll be hosting it in 2022 at the traditional springtime—but no one knows for sure.”

PrevPreviousHow to Prepare Your Business for Hurricane Season
NextFor the BirdsNext