Food Truck Festival on The Ave 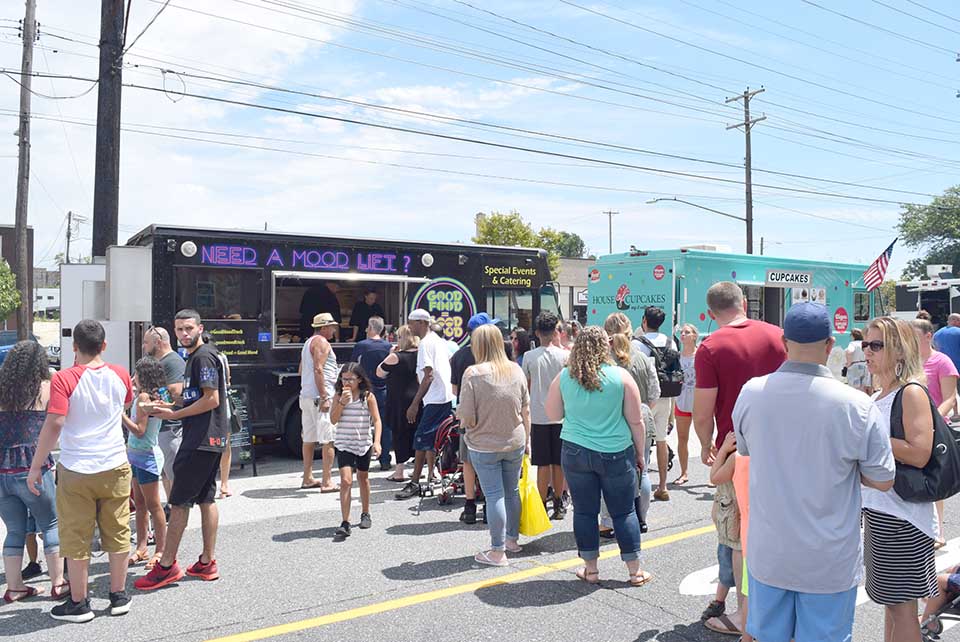 Welcome to our fifth Food Trucks on The Ave festival! You are taking part in a phenomenon that has continually grown by leaps and bounds in recent years.

Food trucks were once simply a side attraction of much larger events such as fairs, car shows, and parades. People went to the food trucks to get the refreshments at the larger show.

In the past several years, however, food trucks have taken on a life of their own. They have become the central attraction, with entire events built around them. The food trucks themselves, once purely local in origin, now travel from major cities to shows throughout the region.

The attraction of food truck shows was not lost on the leaders of VDID/Main Street Vineland. Seeing the popularity of such events in areas around South Jersey, they saw the tremendous potential for a food truck festival on The Ave. They decided to bring such a festival to Vineland.

The plans were initiated in 2017 for our first Food Truck Festival on The Ave. A consulting firm familiar with putting together such festivals was called in and the work began. The setting would be our mini-parks, giving them back the purpose for which they were first designed.

This, however, was not to be just a food truck event. It was decided to sweeten the pot by adding other attractions to make the event even more family-friendly. Non-stop live musical entertainment would take place on a special stage, people could satisfy their thirst at a beer-and-wine tent, fun and games for youngsters would take place at a Kid’s Corner, people could warm up with yoga and other exercises, and other games and attractions would fill out the event. This, in other words, would be eight hours of food and fun.

The consulting firm told us that first-year food truck festivals usually brought in about 3,500 people. They estimated that, with the added entertainment and other attractions, we could hit the 5,000 mark. When all was said and done, and the smoke cleared, we shattered those figures to bits. We had almost 10,000 people visit the festival during the course of the day. Food trucks counting on a more modest turnout ran out of food early. Vineland was on the food truck festival map big time!

The festival has continued to grow, with each subsequent festival repeating the success of the first year. We had to, unfortunately, cancel the festival two years ago during the height of the COVID crisis, but we came back strong last year and look forward to continuing the momentum again this year.

Lots of people have worked behind the scenes to make this possible. We want to thank our legion of volunteers who come together to make this event a success. You will find the sponsors listed elsewhere in this publication. We thank them and urge you to patronize them. Our office staff—Executive Director Russell Swanson, Associate Director Robert Scarpa, and Maintenance Men Geoffrey Dash and Christopher Crowe, the various City of Vineland departments (including the Mayor’s office, Economic Development Department, Police Department, Fire Department, Electric Utility, Emergency Medical Services, Health Department, Public Works, Recreation, and Code Enforcement)—have been there to assure success.

Thank you for coming out—for your support is the prime reason for success. Enjoy!