Barn swallows normally nest in colonies, with many eyes keeping watch for danger. As insectivores, they are extremely beneficial to us, as they ingest flying insects. 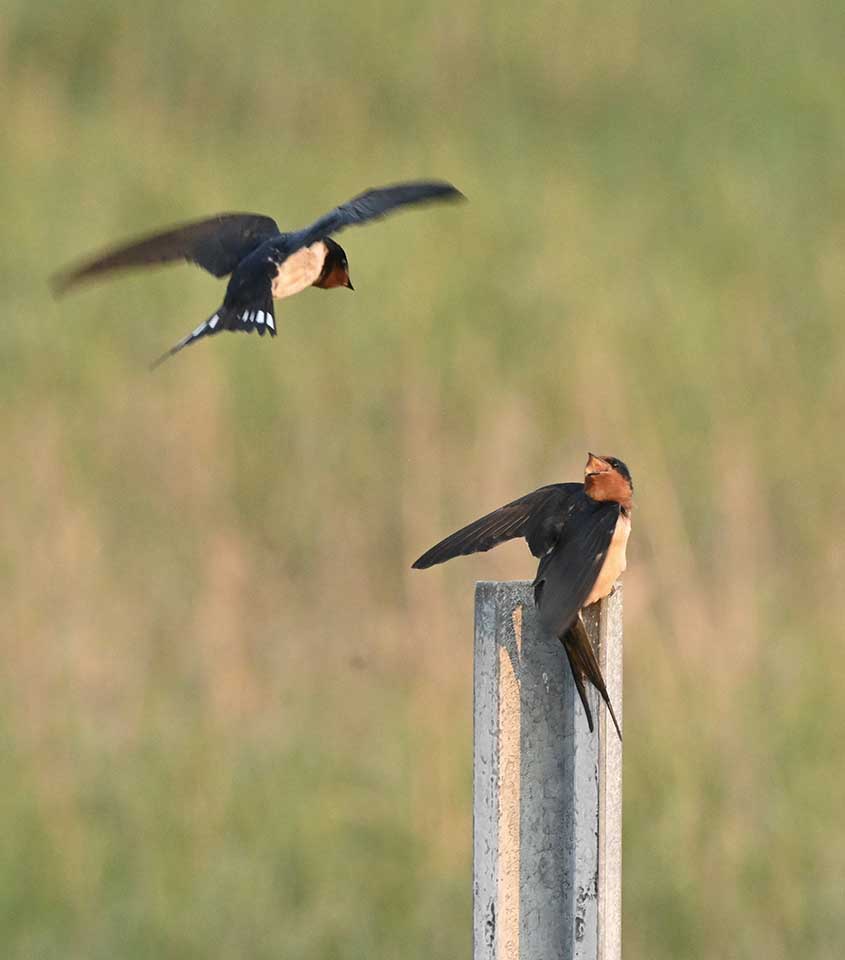 Barn swallows have dark blue wings, back, and tail, and a rufous to tawny breast and belly. They have a bib that is deep cinnamon in color. Males are slightly more colorful than females and difficult to sex unless beside each another. White spots on tail are only visible when the tail is fanned open. With a light chest and belly, these are likely females.
Photography by J. Morton Galetto, Darron Birgenheier

Osprey and barn swallows have an interesting relationship when the smaller bird chooses to build under a platform. I’ve only seen it once but have read that it is not uncommon. Both species are known for their alarm calls, so that each species benefits from the other’s sentinel duties. Barn swallows normally nest in colonies for the same reason, with many eyes keeping watch. Additionally, with a swallow tenant an osprey gets a free extermination service for flying insects.

Sometimes wasps will also build beneath an osprey platform, under or within a wood duck box—much to the dismay of our banders. So a barn swallow was a welcome discovery to be sure!

Originally barn swallows would have nested mainly on cliffs in shallow caves and crevices. Today they rely primarily on manmade structures—outbuildings, open barns, picnic-like shelters, bridge supports, culverts, caves, the open eaves of houses, arcades, and the like.

Their range is worldwide. In our hemisphere they breed throughout the United States into the southern coast of Alaska, the southern half of Canada, and Mexico. They are one of the most common of all land birds with an estimated population of 190 million. As vagrants they even appear occasionally in Hawaii. The summer or non-breeding season is spent in Central and South America. They are considered long-distance migrants, travelling as far south as Argentina with recorded daily flights of as long as 200 to 600 miles (Journeynorth.org), although 55 miles a day is more typical. Central Mexico is the only place where their wintering and breeding ranges overlap.

In our region most migrants arrive in early to mid-April. Their return to wintering grounds begins in July and peak counts are August to early September, with stragglers through mid-October. Cape May Point is a good place to watch south-bound migrations of barn swallows as well as many other species.

When determining a bird’s range, elevation plays a role. Being from flat southern New Jersey I hadn’t given this a lot of thought until I travelled to other places. One of the most dramatic examples I saw of this phenomenon was in Ecuador. Ornithologist Paul Greenfield would describe to our birding group, as we travelled to various heights, which birds we would see and which would “drop out.” This made identifying the dozens of hummingbird species much easier, because above and below certain elevations they simply would not be present. Once you get above 9,842 feet, barn swallows are among those that “drop out.” By the way, at 9,000 feet I felt lousy, and while looking for seedsnipe in the Papallacta Pass at 13,500 feet it is safe to say that I was the one who “dropped out.” I’m a self-proclaimed flatlander!

Barn swallows are often said to be monogamous, since they bond with one mate for the duration of a breeding season and the pair takes on the dual responsibility of raising the young. However, they do have “extra-pair copulation,” meaning that they mate outside of their bond and nurturing obligation; this is known as being genetically polygamous.

During courtship males will sometimes fake an alarm call to get a colony to take flight. At this point he will take advantage of the flush to mate with a selected female. In fact, like a number of species they have the agility to mate in flight.

Light-level geolocation devices suggest that some pairs may overwinter together and remain a lifelong couple. These devices are affixed to a bird’s leg and register and store data of light and dark each day. The time of sunrise and sunset is specific to a given location on the planet so it is possible to pinpoint the bird’s exact location. The retained data is reliant on the bird being recaptured. The capsule-sized device is then removed for computer analysis.

The birds begin nesting in the spring by carrying deposits of mud and making a shelf or by utilizing an existing ledge. The nest is built from the bottom up, forming a cup. Around the world, nesting styles can vary a bit and the workload may vary too. In Europe the male builds the nest. Either way the mud is scooped into the lower mandible and sometimes mixed with grasses or bits of vegetation and used to build the wall of the nest. Then its cup is lined with feathers. They may return to the same mud-constructed nest in upcoming seasons. Nest building takes a lot of time and energy, so nests and their remnants should be left for future years.

As already noted, barn swallows nest in colonies, allowing for many more eyes to watch out for and alert the colony to intruders. They are well-known for dive-bombing predators like barn rats, snakes, cats, and dogs.

Three to seven eggs are laid and both sexes share the incubation duties over two weeks’ time, although the female is the primary incubator. After hatching, the chicks will remain in the nest for 20 days. Upon fledging or leaving the nest they are independent. After fledging they may venture to another colony to raise their own family—in the actual season in which they were hatched! If the adults have a second brood some siblings from the first brood may assist in raising their parent’s second clutch. Two broods in a nesting season is their limit, however.

Parents have to make many trips to feed their young. Most foraging is done within a 1.5-mile radius of the nest. They are insectivores, their diet comprised of 99 percent insects. They give new meaning to the concept of eating on the fly in that they only capture winged insects such as grasshoppers, dragonflies, beetles, and moths. They have an average lifespan of four years, although a maximum of eight years has been recorded.

Most swallows are excellent fliers and are able to outmaneuver many aerial predators. They are streamlined and light, weighing about the same as eight pennies. This lightness increases their agility. They have been clocked at 46 mph, making them one of the swiftest of swallows. Selecting covered structures for nesting makes young less vulnerable to attacks by flying predators. Nevertheless sharp-shinned and Cooper’s hawks, screech owls, gulls, and grackles can predate on barn swallows and there are records of bullfrogs and fish successfully capturing them as well. Young and eggs are also vulnerable to snakes, raccoons, fire ants, weasels, bobcats, squirrels, rats, and others.

Because they are insectivores, barn swallows are extremely beneficial to people. Their only downside is that if you have a colony inside a structure their feces can be unsightly, and can create a health nuisance.

Their worldwide populations are considered stable although there are some very troubling declines. The Partners in Flight 2016 Landbird Conservation Plan reported a 76 percent population decrease in Canada over 40 years (2016 report), and a cumulative decline of 38 percent since 1970 in the United States and Canada. Today it is more customary to build closed barns for many reasons including sanitation and vermin. Additionally, researchers suspect that changes in foraging habits due to insect shifts caused by global warming is having an impact on swallow numbers.

Agriculture and insect declines have surely impacted barn swallows. The University of Michigan’s Animal Diversity website explains this chain of events: “Insects attracted by the presence of livestock and the ideal surrounding habitat are the primary food source for barn swallows living in agricultural areas. Locations where farming has ceased exhibit a 50 percent reduction in insect populations.”

Egyptian mythology links swallows to the stars, forming a symbolic connection between life and death. A number of bird species are envisioned as connecting souls to the heavens as people have always been mesmerized by flight. It is not uncommon to see CU members and others on a bridge along Millville’s Bicycling and Walking trail, captivated by the flights of the nesting barn swallows beneath.