Could it be the beginning of the end of flu season? 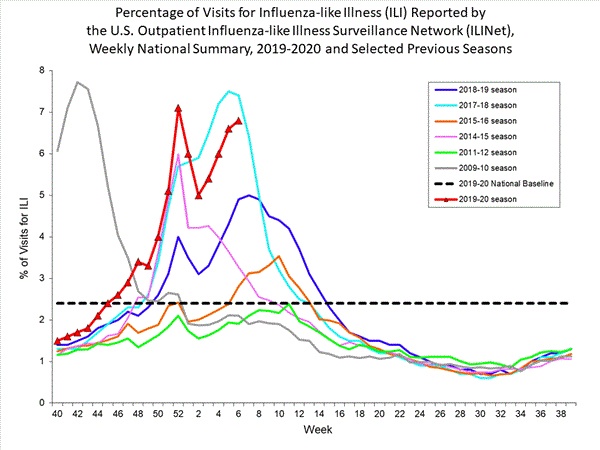 The latest flu data can be viewed with optimism, since it appears the flu season is starting to wind down. The data also offers a cold dose of reality: 24 United States states showed either record-high flu activity or numbers that were higher than ever for this time of year.

“While flu remains quite active throughout the nation, the season is beginning to slow down,” Dr. Bryan Lewis, a professor at the Biocomplexity Institute at the University of Virginia, told AccuWeather last week. “However, make no mistake, this season is strong and still in full swing.”

Visits to health care providers for influenza-like illnesses (ILI) increased for a fourth straight week to 6.8 percent compared to 6.6 percent the previous week, according to the Centers for Disease Control and Prevention (CDC). That’s the second-highest level of activity this season; it reached 7 percent in the last week of 2019.

While ILI activities continue to rise, this second surge of activity is showing signs of slowing, according to researchers at the Biocomplexity Institute. Fewer states (32) reported an increase in the most recent surveillance report and overall magnitude of increase at the national level is plateauing, Dr. Lewis and his team note.

“It seems likely that things will continue to gently slow down, though there seems to be a bit of activity still in store in the Northeast,” Lewis told AccuWeather.

Dr. Lewis and his team foresee activities in the Northeast to increase, mainly from the mid-Atlantic through New England. Nationally, the second peak of ILI activity should occur in the coming week and start to decline, according to the researchers.

An estimated 26 million people have experienced flu illnesses in the U.S. this season, with 250,000 hospitalizations and 14,000 deaths from the flu, according to the CDC. Indicators that track overall severity (hospitalizations and deaths) are not high at this point in the season.

All but six states in the U.S. are considered to be at a high level of ILI activity, the CDC notes; Nevada, Oregon, Alaska, Florida and Idaho are the exceptions, with Delaware reporting data that was insufficient to calculate an ILI activity level.

Flu season typically begins in October, peaks between December and February and lasts well into March, although activity can last as late as May. Flu viruses are more stable in cold air and the low humidity allows the virus particles to remain in the air, according to Peter Palese, who was the lead author on a key flu study in 2007.