Trading sticky web for trapdoor funnel, the Eastern funnel-web spider relies on its speed and venom to grab and disable prey caught in the funnel’s shaft. 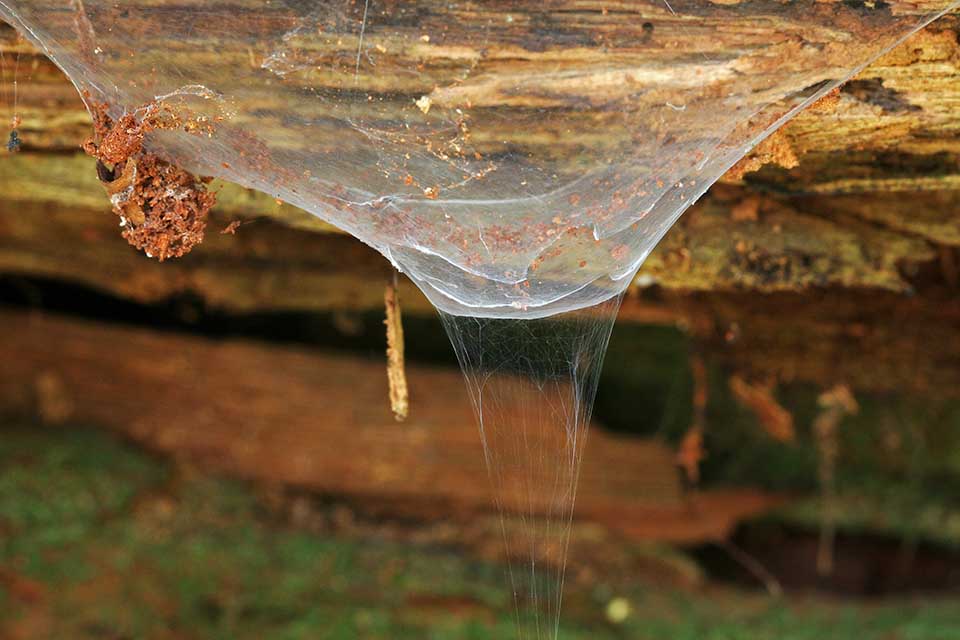 The morning was still brisk as I embarked on my daily walk. The warm ground and cold air caused dew and moisture to condense on every surface.

The oak fungus came up overnight and grew at rates only fungi can achieve. The mystery of such rapid cell duplication boggles my mind and overwhelms my intellect. Large flat toadstools overlapping each other are dressed in creamy yellow one day and the next day they are tanned by the temperatures achieved late in the afternoon—in mid-October, nearly 80 degrees. They seem to appear magically and wither away in the blink of an eye, releasing their reproductive spores on the ground. I know that what lays beneath them is an organism enormously larger than what I am viewing on the surface.

The air is thick with the smell of decaying forest mast. I always associate the odor of autumn with fallen leaves and playing in them as a child. But I know the odor is emanating from a potpourri of forest life and death, so much more complex than leaf litter alone.

It is the time of year for suspense and superstition. A few days earlier, on our way home from Port Republic, I thought of the Leeds Family and their strange offspring—the Jersey Devil. We drove past two large fields on Cologne Avenue in Atlantic County that were filled with parked cars. Behind the parking areas were acres of cornstalks with labyrinth paths, daring families to enter and challenging them to escape. I imagined someone dressed like the Devil himself, hidden among the stalks and making ready to scare the dickens out of unsuspecting passersby. Farm stands were festooned with pumpkins in all shapes and sizes. Multi-colored gourds were arranged on hay bales for shoppers to inspect prospective holiday purchases.

On my well-worn path encircling our property I have no such challenges as those presented by corn mazes. After three decades of walking it, if it weren’t for the occasional deadfall I suppose I could travel it blindfolded. Though the path is the same the changes are continual, and each season presents its own flora and fauna, sights and smells.

One day the devil himself lurked in the shrubs. Under a tornado of silk lurked an eight-eyed speed demon. As I looked over the canopy of ground juniper, I had the eerie feeling of being watched from a mass of miniature woven trampolines that dotted their surface. The dew made the lacy webbing more visible than it would be later in the day. But on this morning the beasts’ tunnels looked as if they extended to Hades.

I imagined hearing them slurp the innards from their venom-injected prey after the swift attack that brought their unwilling victim down their funneled shaft, into their den of despair—possibly licking their chops in anticipation of their next meal. The breeze from the river blew over me and I felt a chill down my spine.

It was time for me to identify my deadly little invaders—and oh yes, Happy Halloween. This required a little assistance from bugguide.net. Apparently there are 14 species of Agelenopsis or “grass spiders” in North America. In New Jersey we have at least three—emertoni, kastoni, and naevia. I decided those that I have been seeing are naevia, or the Eastern Funnel-web Spider, but I am far from an expert on arachnids. In fact, I have a healthy respect for them since all can inject venom with their fangs. By the way, their fangs are called chelicerae, and they also possess endites of maxillae or auxiliary mandibles, palpi or feelers, and labium that they use to manipulate pray (not a true tongue, so licking one’s chops was poetic license, just for seasonal effect).

Before we can delve into the particulars of the grass spider let’s get a few spider facts out of the way. Spiders are not insects because those have six legs and three body segments, whereas spiders are arachnids with two main body parts and eight legs.

Most spiders also have eight eyes, although there are exceptions with six, four, or fewer. Our subject species, the grass spider, has three rows of eyes arranged two in the first row, four in the second, and two in the last, although some describe them as having two rows—two on top and an arch of six beneath. But the arrangement looks like three rows of eyes to my two eyes!

Their bodies are an exoskeleton so they have a rugged exterior and no bones, the same as insects. When they grow they shed the exoskeleton or molt it, and their new exoskeleton becomes like rigid armoring until the next molt. This continues until they reach adult size.

Few spiders are truly poisonous to humans but at least two species in our South Jersey region give pause—the black widow and the brown recluse. The widow’s bite is said to equate most closely to a bee sting. The recluse has the potential to be a true health issue. It can cause necrosis or death of healthy skin cells around the bite site, and it should be treated. These bites can expand and affect both superficial and deep tissues. Discoloration of the skin from a bite is best looked at by a physician.

But most spiders do not bite unless provoked. When it comes to these creatures I inspect them with my eyes and not my fingers, although experts assure us most bites are harmless. Know that each country has its own suite of species and some are known to be deadly. Here in the United States an allergic reaction or a recluse bite, as best as I can determine, are the main causes for concern.

We have discussed spiderwebs in previous articles and talked about spiders putting out more than one kind of silk—sticky and non. We have mentioned that a spider can tell the difference and walk its web without being entrapped. It also can recycle its web material. And in biomechanics, scientists study the unique strength of the webs and silk.

Our grass spiders don’t produce sticky webbing; they have a different strategy. They make a flat surface for insects to land upon and they stay just beneath the tornado-shaped “funnel” or tunnel, under and often to the side of the flat, webbed horizontal section. They rely on speed to capture their prey and venom to incapacitate it, which is generally achieved in just a couple of seconds. The venom transforms the captured insect’s organs into the spidery milkshake that will be sucked out once it has dissolved. When it comes to ghoulish Halloween material it’s hard to beat a spider’s natural history.

The agelenopsis or grass spider genus is considered harmless and non-aggressive, and even shy around humans. And their speed allows them to avoid human encounters. However, if you are bitten there is swelling, redness, pain, and itching that lasts from one to 10 days.

Given their web’s design it is not surprising that they are members of a group called “funnel weavers,” and agelenopsis is the “grass spider.” Body size, not legs, is normally the standard for measuring spiders, and this species is usually about 3/4 of an inch, with males tending to be smaller than females. Most of the 14 species in North America are predominantly brown with ivory, tan, gray, and black shading. All the grass spiders have eight eyes. The front body segment or cephalothorax, that includes the head and thorax, has two dark stripes.

Females stay close to their webs, capturing prey and eating it in preparation for mating and egg laying. Males wander in search of a mate. Shortly after mating the male dies, and after the female lays her eggs she dies, too.

Their eggs are round spheres that overwinter and hatch in the spring. After emerging the baby spiders molt many times before reaching adult size. They are not fully grown until late summer or early fall, so their lifespan is about half a year.

Spiders’ life histories vary from species to species; for example a jumping spider can leap 40 times its body length! This is a great topic to capture children’s curiosity; for Halloween you would be hard-pressed to find a more timely subject. My seven-year-old niece equipped me with one of her books on arachnids when I told her I was going to write about funnel spiders; she had already been intrigued by them. So go ahead and find a campfire and tell some scary spider stories. But don’t forget to also talk about the beneficial role they play in helping to keep insect populations in check.