It’s a bird, it’s a bug, no it’s a treefrog—a southern or northern gray, to be exact— and its call enriches nature’s springtime symphony in southern New Jersey. 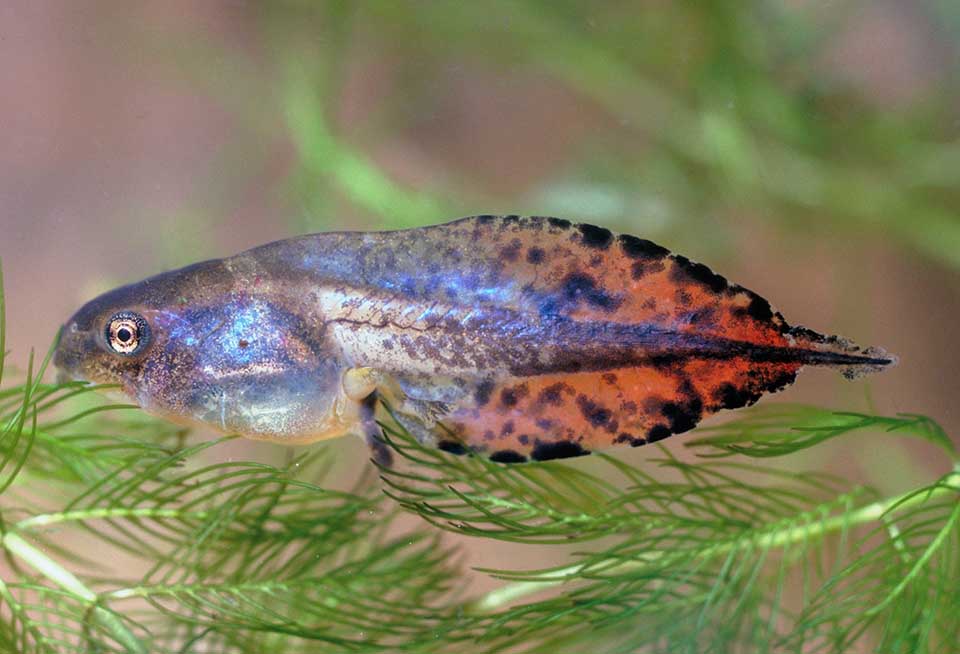 The eggs of the northern gray treefrog (Hyla versicolor) hatch in about four days, and the frogs-to-be remain as tadpoles for up to two months. During this time they grow back legs, then front legs, then slowly absorb the tail until resembling a tiny adult frog. Shown here, the back legs are beginning to emerge. Photo: GARY MESZAROS/SCIENCE PHOTO LIBRARY
by J. Morton Galetto, CU Maurice River

One of my friends lives adjacent to the Manumuskin Creek here in Cumberland County, not far from Peaslee Wildlife Management Area. He described hearing a bird or insect-like call, “sort of a high-pitched flute-like trill sound, a rolling call, a warbling musical chirp. But I don’t think it is a bird or an insect.”

“I know just what it is,” I said. “And you are likely to hear it pick up the pace around dusk and into the evening as the days get warmer.”

“It’s a gray treefrog, either the southern or northern gray,” I told him.

As spring warms up, treefrogs will increase their courtship calls from May through June. At around 62˚ Fahrenheit the males will really get tuned up. There are two species of gray treefrog—the northern and southern gray. They are indistinguishable from one another in appearance. Their calls are different but even experts aren’t always comfortable making the identification by call alone.

State biologist David Golden, director of NJ Fish and Wildlife, described the difference to me as such: The northern gray treefrog has a slow trill, while the southern gray (also called Cope’s) is quicker, shorter, and higher pitched. However, temperature complicates identification. Cooler weather tends to slow down their rhythm. Experts use a combination of tape recordings and recorded temperatures and humidity to decide which species they are hearing.

The southern gray is listed as endangered. In New Jersey, habitat is the most limiting factor since they require vernal pools and wooded areas. Vernal pools are not plentiful and in dry years they can be fewer in number or nonexistent.

I went on to explain to my friend that the gray has a bumpy or warty appearance similar to a Fowler’s toad; however, there are noticeable enlarged pads on the end of each digit on their four fingers and five toes that are absent in a toad. (The pads are actually suction cups that allow it to cling to many surfaces.) Treefrogs look shinier and moister, while Fowler’s toads have a more matte, dry appearance. Furthermore, a Fowler’s toad generally has a light color stripe the length of its back not present in grays.

Gray treefrogs’ (northern: Hyla versicolor, southern: Hyla chrysoscelis) color changes depend on their surroundings, and vary from green to gray or brown. They normally look greenish-gray to me and blend in well with lichen, advantageous camouflage on the trees they cling to. Their backs have variable black patches. Sometimes these connect and have some symmetry and other times they seem random, or don’t seem apparent at all.

If you have one in hand you can see that the inner surface of their hind legs has a yellow/orange line. This is not usually visible when they are perched because it is hidden by their bent legs as they assume a sitting position. Beneath their eyes they have a light-colored patch, sort of like the tear drawn on a circus clown’s cheek.

As adults, treefrogs are arboreal but they need water to lay their eggs. While off-season these frogs rest high in trees, during mating season they are normally not far from a vernal pool or some other source of water. They stay perched on shrubs around ponds or sometimes pondside, laying their eggs in these seasonal pools. The eggs hatch in about four days and they remain as tadpoles for about two months.

The tadpoles are easily identified. Although the body coloring is inconsistent as in the adults—with varying shades of brown to olive green—they have scarlet tails.

The back legs grow first, then the front legs, and the tail becomes smaller as it is absorbed by the body growth. Finally they look like small counterparts of the adult. When fully grown they range in size from 1.25 inches to 2.5 inches.

Adults feed on insects and spiders in shrubs, trees, plants, and on the ground.

Annually CU Maurice River holds a “Frog Slog,” during which children and adults search for frogs and identify the species. Each year I venture off to follow the call of a love-sick gray treefrog. I do my best to sneak around, knowing their eyesight and hearing are superior. The kids run about laughing and giggling as I quietly stalk my prey away from their ruckus. After what seems like an eternity I locate one, capture it, and bring it back for the children to see. It is only then I find that they have collectively amassed a number of different species in my absence, having used techniques as unorthodox as literally diving into the shallows, and are examining them intently with a guest lecturer.

Then I doubt my sanity for having bothered to pursue my quarry stealthily and independently. Their young eyes and enthusiasm seem to outmatch mine each year. I sense the irony of my situation and find it a source of amusement.

Years ago we created a pond in our backyard. This actually does have a “build it and they will come” outcome, so now we have a pretty good mix of frog species near our house. On one particular night, when we were entertaining guests outside, a gray started calling and I went in search of him. Much to my amazement I found him in short course and I began to film him calling. Then, I have no idea what possessed him to do so, but he jumped onto my shoulder where I could no longer see him. At that point I proclaimed myself to be a frog whisperer, feeling compensated for all the times the children had made my frog discovery abilities pale in comparison to their newbie talents.

I want to share one final observation, one that you may not believe to be true, but I assure you that, beyond a question of a doubt, it’s accurate. Frogs bring out the child in all of us. I have no idea why, but on a frog slog the giggling that challenges the night’s calm comes from all ages and shows that each of us still has a child hidden within. And it strikes me as fitting that something as unlikely as a frog unleashes that universal truth.

CU Maurice River holds its next Frog Slog on Family-Friendly Friday, May 27, at 6 p.m. Spend the evening looking for and identifying the hoppiest nature around. Learn to recognize frogs by their breeding songs and also learn about some of their food sources.

In order for the leaders to identify and interpret the species, the children will catch specimens—to be returned safely to their habitats soon after. This experience requires slogging through water and sometimes mud so dress accordingly.

The location is in within Cumberland County and will be given to those who RSVP- call CU Maurice River’s Millville office at 856-300-5331.