Common buckeyes congregating on an Indian summer day are a vision of paralyzing beauty. 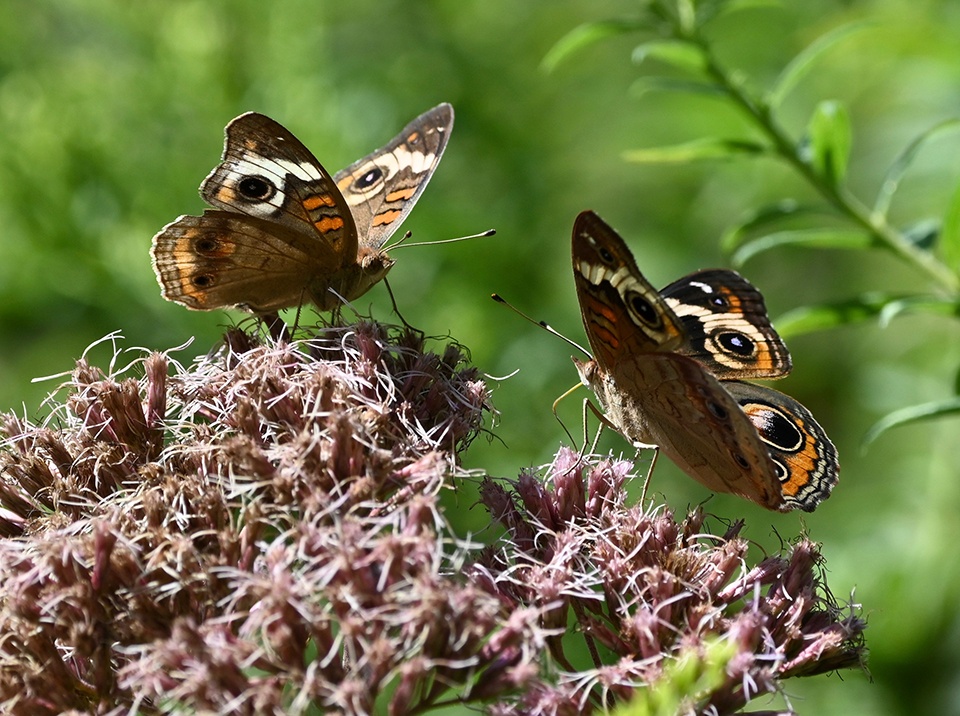 It was a lovely late autumn day and my husband and I were running our dogs on a salt hay farm off Stimpson Island Road in Dennisville on the NJ Delaware Bayshore. It was in the late 1980s—so prior to PSEG’s 1990s program of restoring wetlands to tidal marshes—and you could still walk a harvested salt hay farm field. This was the predominate crop along the Bayshores when the marshes were diked, although by the late ’90s most of these farms were no longer maintained.

Salt hay is virtually impervious to rot and it contains no weed seeds like other types of hay. Fine and wiry, it has been used as insulation material in preventing frost damage for tender agricultural crops such as strawberries, for making rope, for insulating freshly poured concrete, and even at one point to stuff casket mattresses. Salt marshes have also been used in the past as pasture land. The best-producing salt meadows yielded up to three tons of salt hay per acre and could be harvested twice during the growing season.

There were some islands of shrubs on the salt hay farm and a groundsel bush was in late bloom. As I got closer, I saw it was covered with hundreds of common buckeye (Junonia coenia) butterflies. A striking sight on what was an Indian summer day, the beauty was paralyzing. It seemed inconceivable to me that so many butterflies could be congregating on this salt-tolerant shrub. Groundsel can bloom any time from early spring to late fall and they had found this nectar source to help fuel their migration.

Monarch migrations get all the good press but our second most common butterfly migrant is the buckeye, a favorite of mine. These brush-footed butterflies belong to a family called nymphalidae and are second only to lycaenids as the largest and most diverse group of butterflies worldwide. This includes about 4,500 species, 200 of which are in North America (P. & C. Sutton).

Lepidopterists, or those who study butterflies and moths, describe brush-footed butterflies as having shortened, hairy forelegs resembling the bristles on a brush. They walk on their four hind legs, using their front legs to identify nectar sources and host plants.

Host plants are those on which butterflies lay their dark green eggs, so that when they hatch the young caterpillars can devour leaves of a particular food source. This is a specialized dependency and many butterflies have only a couple of viable host plants. The buckeye is known to use pink false foxglove, plantain, toadflax, snapdragon, and twinflower. Adults will nectar on a number of plants in my yard, but they are especially fond of Joe Pye weed and goldenrod.

Join CU on Sunday, September 22 for a Down Jersey Butterfly Tour led by naturalist Steve Glynn, free for members. E-mail citizensunited@cumauriceriver.org or call 856-300-5331 for details.
You can learn about salt hay in CU Maurice River’s online teacher’s guide cumauriceriver.org/downjersey/titlepage.html
Great books if you wish to learn about NJ Butterflies:
• Butterflies of New Jersey, Michael Goshfeld and Joanna Burger
• How to Spot Butterflies, Pat and Clay Sutton
• For identification of butterflies there are numerous guides; one of my favorites is Kaufman Field Guide to Butterflies of North America, Jim Brock and Kenn Kaufman
• For caterpillar identification: Caterpillars in the Field and Garden, Allen, Brock and Glassberg
• Pat Sutton’s Wildlife Garden is a super website especially for folks in the Mid-Atlantic Region.
Join Pat’s Garden Gang for free local updates on natural history phenomena, at patsuttonwildlifegarden.com

Buckeyes are strikingly splendid, displaying a stark contrast of colors. The upper side of their wing primarily features shades of brown bordered by oranges on both the hind and forewing. Two large creamy bars cut diagonally through the corner of the forewing below its apex, followed by two orange zigzags. The creamy bars have eye spots at their terminus. The hind wing has two lovely eye spots of blue and orange, encircled by a creamy accent and dark outline. Their wingspan averages two inches. The underside of the wing is bronze to reddish or “rosa strain.” The color types are genetic variations caused by ecdysteroids, or insect hormones. Some biologists also cite host plants as playing a factor in coloration. The results are simply stunning.

Eye spots serve a unique purpose in the world of butterflies and moths. Two markings like large eyes will hold some predators at bay: Whoa! More aggressive predators, in particular birds, will sometimes seek to peck out an eye. These markings are not in any vital organ area and the potential prey escapes with its life.

This time of year, you will see an abundance of these beauties, since they range as far north as Canada and their migration filters south through our region, mixing with our resident buckeyes. Their permanent range (year-round) is from North Carolina across the Gulf states to western Mexico and coastal California but they are regular migrants to central Maine and southern Canada (while absent from the northern Rockies). They do not overwinter, but are an immigrant to most of New Jersey. Often abundant on the southern Coastal Plain, they become uncommon northward and quite rare in the northwest part of the Garden State. Counts of more than 100 per day are not unusual at Cape May (compiled by Burger and Gochfeld, Butterflies of NJ). They are unable to survive freezing temperature so they must seek warmer climates.

What I was witnessing those many years ago were migrating common buckeyes likely resting before making a Bayshore crossing in their migration south. Now and until the end of fall is a great time to try to locate a group of buckeyes en masse. I still find their beauty mesmerizing, and I hope you will, too. n