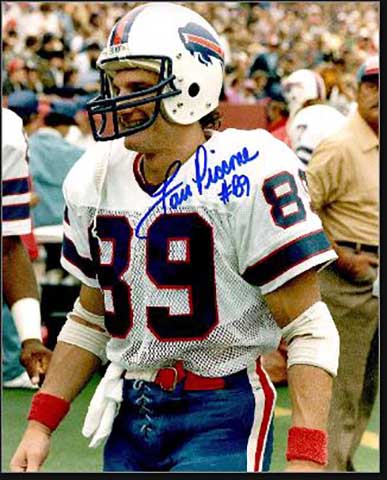 The City of Vineland will honor Lou Piccone, who, in 1974, became the first Vineland High School player drafted into the National Football League. The ceremonies include a street dedication, key to the city presentation, and dinner reception on Thursday, September 29.

“Lou Piccone was known as a gritty football player who always gave it his all on the field. But above all, he is a kind and gentle man who never forgot where he came from,” said Mayor Anthony Fanucci. “Lou was the quintessential utility player who could fill several positions. His work ethic and contribution on special teams and as a receiver made him a fan favorite, and they loved to show their appreciation by chanting ‘Lou, Lou, Lou’ whenever he took the field. He has been an inspiration to many that have donned the ‘Fighting Clan’ red and grey uniforms, and it will be an honor to welcome him back to Vineland to show our appreciation.” Lou played his college football at West Liberty State College from 1968 to 1971, where he stared as a four-year letterman both as a running back and a kick-off return specialist. Initially spurned by the pros due to his size, the 5-9, 175-pound speedster played two seasons of semipro football before signing a free-agent contract with the New York Jets in 1974, leading the league in kickoff returns as a rookie. He spent three seasons with the Jets as their primary kick and punt returner, and part time receiver.

Reflecting on his NFL career, Lou proudly says, “My father Lew is my hero and he deserves a lot of the credit for my making it. Because I had an education degree, my father wanted me to use my brains instead of my brawn. ‘You are too small,’ he said. I think that’s what really did it because he had forgotten all of the stories he told me. My father was only 5-7 and he was a professional boxer in the 1920s and ’30s. He won 84 fights and lost three. Once he knew I was serious about making it in the NFL, he was in my corner all the way.”

His father died in 1984, but not before he saw his son Lou become an NFL veteran.

“My father is still my hero. Without his guidance, I don’t know where I would have ended up, but I don’t think it would have been in the NFL,” he added. Lou’s mother Rose also had a successful career as a beauty products representative, and he says, “her work ethic and perseverance also helped influence me during and after my football career.” While he was playing, Lou was also a player representative for the NFL Players Association and an influential member of the NFLPA executive committee. Following his retirement, he served for many years on the NFLPA’s Steering Committee for Retired Players. After his playing days, he also went on to have a successful public relations and communications career.

Lou Piccone Day on Thursday, September 29, will kick-off at 11 a.m. with the street dedication at the corner of Montrose Street and S.West Avenue. That evening, the Key to the City presentation and dinner reception will be held at the Greenview Inn beginning at 6 p.m. Tickets are $75 per person. There will also be a separate cash bar. For reservations, call 856-794-4000, ext. 4814, or e-mail Loupiccone@vinelandcity.org.