The dove has an historical role as an icon of peace in our culture. Our columnist contemplates that as she studies a family of mourning doves nesting nearby. 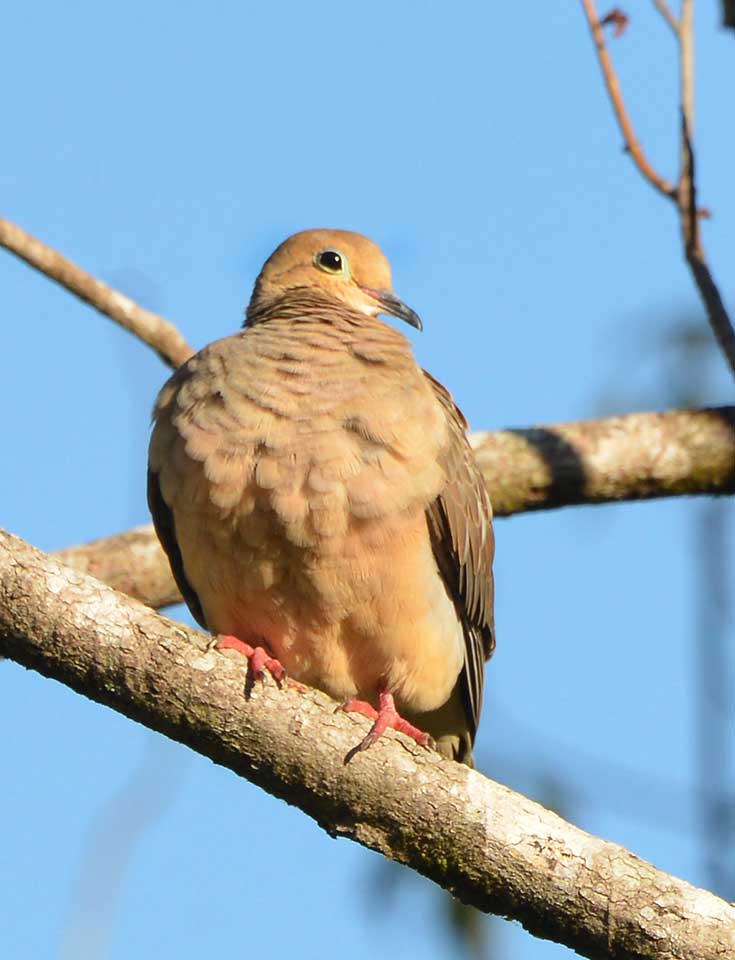 The mourning dove has a blue eye ring and reddish feet. Its range includes all of the lower 48 contiguous United States, Canadian provinces that border the United States, and Central America. In the United States there are seven species of native doves, but in New Jersey, we see only the mourning dove. Rock doves or pigeons are native to Europe and southwestern Asia.
by J. Morton Galetto, CU Maurice River
Photography by J. Morton Galetto

In these troubled times, when war continues to raise its ugly head around the globe, it seems fitting to discuss a symbol of the alternative. In ancient Mediterranean cultures the olive branch denoted accord, and the Roman goddess Pax and her Greek counterpart Eirene were commonly depicted holding an olive branch to indicate that they were the goddesses of peace.

In Greek myth the goddess Athena competed with Poseidon for favor over the region of Attica by turning her spear into an olive tree next to a well. This was considered a symbol of peace and prosperity because of the many uses of olive trees and their wood. Conversely, Poseidon tried to claim possession of the region by shoving his trident into the Acropolis of Athens. The court of gods ruled that Athena be considered victor because she bestowed her gift in a more benevolent manner, and thus the city was named Athens.

Our subject today is the mourning dove, or Zenaida macroura, and it too has a place in the symbolism of tranquility and goodwill. In fact in the biblical story of Noah, he sent a dove to see if the waters of the flood had receded. The dove returned with no evidence that there was a place to rest her feet. Seven days later the dove was once again sent on a reconnaissance mission, and it returned with an olive branch. Noah then knew that land had finally re-emerged. It is this biblical account that is responsible for our modern-day symbolism linking doves to peace.

These narratives have resulted in the dove having a long-standing culturally significant role in our expression of harmony. It is not uncommon for a white dove to be released at sporting events or other large gatherings in which people wish to advance solidarity, cooperation and, yes… peace.

It is with this cultural mindset that I view a nesting dove in her family’s throne over the Maurice River. She is encircled by loosely yet methodically placed sticks. Her mate has delivered each by landing upon her back; she remains in a seated position and surrounds herself with sticks, until her body creates a cup for her two ivory-colored eggs.

On subsequent visits, in order to find her my eye travels up the gray flaky bark of a small black river birch tree to a fork where she sits motionless, hoping to evade my gaze. She is brown with buffy tans and a hint of mauve. Her mate is very similar in appearance. She blends in so well that she would elude my rediscovery without my using the tree’s trunk as a map of sorts. She will incubate her eggs for two to three weeks before they hatch, and an additional two weeks will be spent caring for them in the nest before they fledge. The male, within the monogamous relationship, shares in the parenting role, both incubating and feeding. He will help her guard the nest as well. Since this pair is nesting at the end of July it is likely their second brood.

Doves will sometimes reuse a nest or nesting site, or a subsequent pair may make use of a previous pair’s nest. Chicks can expect a lifespan of 1.5 years, but further explanation is necessary. The first year there is a 75 percent chance of mortality, with adults having a 60 percent mortality rate. Those who survive the first year are likely to live up to five years (Sciencing.com). There are records of their living 31 years, but the University of Michigan Animal Diversity compilation suggests 19 years as being on the high end of life expectancy.

You may notice a mourning dove with an enlarged neck just above the chest, in a muscular pouch or storage area in the esophagus called a crop. It is a pantry of sorts. One record shows a dove to have an enlarged crop holding 17,200 bluegrass seeds.

Doves are seed eaters (99 percent), feeding almost exclusively on the ground where they blend in well with the soil and leaf matter. Initially chicks can’t digest seeds so the adults will store them in their crop and produce “crop or pigeon milk.” For the first four days of life this antioxidant-rich substance is passed from the adult’s throat into the mouths of its young, until they transition to undigested seeds.

The male and female are difficult to tell apart. Both have short reddish legs, a long pointed tail, a lovely blue eye ring, and black spots on their wings. The male is a tad larger, shows slightly more pink hues, and its crown has a bluish tint. Overall the male may also display a bit more iridescence, but without a lot of light and the help of optics it’s difficult to make these distinctions. Behavioral observations can help to differentiate males from females; for example males are much more likely to be calling as well as to be guarding a specific perch against rival males as they try to attract mates.

In my opinion calling is what doves are best known for, especially in the morning and late afternoon. Their call is described differently by many sources, but most agree it is a mournful variation of “coo-ah, coo, coo, coo.” It is deep-toned and for me resonates in one’s psyche. Clearly I’m not alone in this observation; its very name, “mourning,” attests to that effect.

In my international travels I have heard many different doves and most have a similar effect on me. I would describe it as a combination of poignancy and serenity. The white-tipped, ruddy quail and Zenaida doves surely give the mourning dove some competition in the tissue sales department. In human terms I would equate these calls to the low-pitched Oms I heard Buddhist monks chant in the temples of India—low, steady, pensive, reflective, and transportive.

Doves are swift and maneuverable fliers, clocking in on short flights at 55 mph. They have large strong chest muscles for their size. In the air peregrine falcons are one of the few birds that can present a threat. Most of the danger for doves comes from raccoons, domestic free-roaming cats, black rat snakes, and falcons.

Doves/pigeons have long worldwide history as table fare because they are tasty. In Orvieto, Italy, along its steeply cliffed walls is a series of manmade underground caves that act as a network of hallways, with openings built as balconies. This Etruscan labyrinth encircles the Acropolis. In the event of siege the city could cordon itself off from the surrounding farmed countryside and be entered only by climbing its walls. But being isolated from the flatlands also meant being cut off from food sources. Niches in the caves were created as aviaries. Birds could feed beyond the acropolis’ walls and return to the caves, where residents could then use them for sustenance. The stored grain was for human use only. In times of peace this was essentially a pigeon farm. Today the caves are not used as such but farm-raised pigeon is still an Umbrian delicacy.

Because of their swift flight and agreeable taste, hunters find them sporting. Due to the vast quantities of grain and seed they consume in areas where they are abundant, farmers often welcome hunters. Some charge for farm shoots during migration so that they benefit economically both in reduced numbers of doves foraging in their fields and from fees. Forty-one states have a dove-hunting season (Sportsmen’s Alliance/International Sportsman), while Michigan and a block of seven Northeast states, including New Jersey, do not have one. Nonetheless the U.S. Department of Agriculture estimates that 1.9 million recreational hunting trips are taken each year, which has an economic impact on many areas. Proper seasons and bag limits have thus far made these hunts sustainable.

Doves clearly fill a niche in our culture. Wouldn’t it be grand if we could focus more on the peace doves represent and less on greed and conflict?