The author still hasn’t seen one take down a cicada but the search has expanded her knowledge of nature’s wonders. 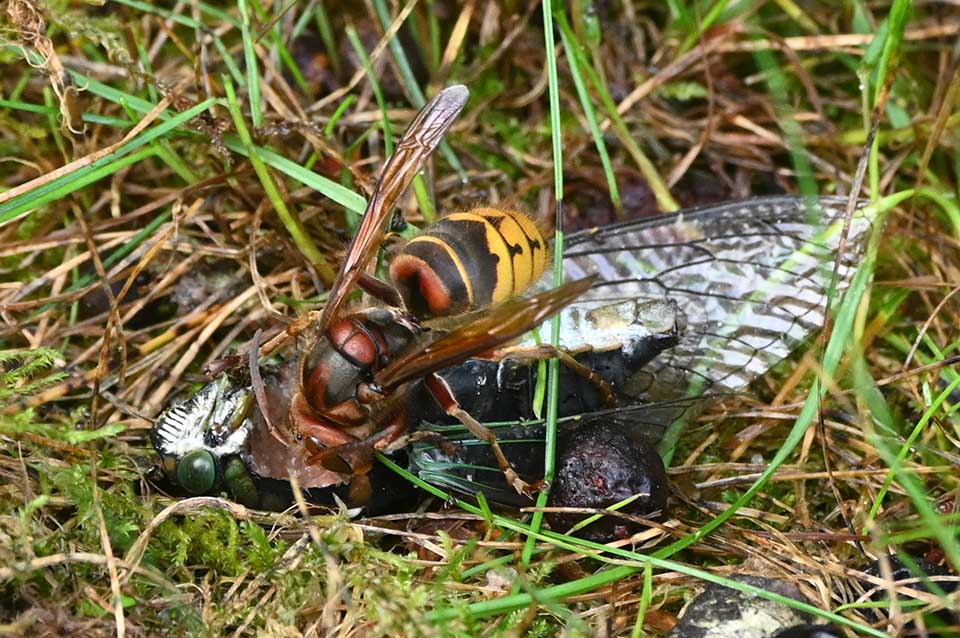 Years ago I noticed a couple of rather large piles of sand at the entrance to a hole. The opening was roughly quarter-sized and one to two cups of loose soil surrounded it. One was shaped like a volcano—a hill with a hole. The other was similar, with a trough that looked like a shooter marble had been rolled along the sand leading to the entrance.

So I decided to sit down and observe the entrances. And then what looked like a European hornet came out of the hole and I suspected a nest full of large wasps. But that didn’t make sense because hornets build large egg-shaped nests or layers of paper between house joists and such.

I came to know that what I was seeing was the nesting burrow of a cicada killer: a large one to two-inch insect that looks much like the European hornet to an untrained eye. The cicada killer is a solitary wasp that makes a hole and several chambers along it to store prey on which its eggs can be implanted. And its prey, as the name suggests, is cicadas. Yes, the misnamed 17-year locust, or this year’s famous Generation X that was all the buzz on the news and in the woods, although more prevalent to the west and north of Cumberland County.

However, there are many broods of cicadas coming out at different intervals and some are annual like the genera Neotibicen, locally the eastern scissor grinder (Neotibicen winnemanna) and the morning or swamp cicada (Neotibicen tibicen tibicen) that have been making a racket this August.

The United States and Europe have cicada killers. There are five species here, and the one in the eastern U.S. is Sphecius speciosus or eastern cicada killer.

During June and July the cicada killers or cicada hawks emerge, with the stingerless males aggressively defending a territory in order to mate. When a female enters an area it is evidently common for her to be bombarded by males hoping to carry on their genes, such that a “mating ball” can develop among rivals. They can mate with more than one female but sometime after copulation the male dies and the female goes on about the business of raising their young. The male lives about two weeks and she lives about four. She will nectar and eat some sap but is thought primarily to work and feed very little.

Although she has a stinger she is not aggressive; cicada killers are not nest guarders like honeybees and many wasps. However, it is inadvisable to test her good nature. She will normally sting only if intentionally annoyed, and the venom is said to feel like a dentist’s Novocain.

The female digs a burrow with a main tunnel and later a number of side chambers in which her young will metamorphize from larva to adult. She loosens dirt using her front legs, and the two pairs of hind legs push it out the hole. She may also push the loosened soil with her front legs and head. Cicada killer prefers well-drained loose soils with full sun exposure. So typically, property owners see them in their lawns.

After preparing a tunnel and side chamber her murderous hunt begins. She finds a cicada primarily by sight, deduced by the fact that she prefers the soundless female of the species. Prey is caught chiefly while flying. She stings and paralyzes the cicada with her venom and takes it back to the burrow, no small feat since the cicada is a comparatively large creature. Sometimes she will pull her victim, but at other times she may drag it up a tree and glide the prey toward the burrow, as far as 100 feet away.

She pierces a hole under the second leg of her victim and places an egg there. Location is important because the larva will eat its paralyzed meal alive, avoiding vital organs in order to prevent its death for as long as possible. Possibly this story is not an especially great lunch counter read. When people suggest to me that nature isn’t cruel, I suspect they seldom delve into the uncomfortable realities. By and large I would say that the cruelty is however purposeful.

The female cicada killer seals the side burrow and prepares another birthing chamber; thus the hunt begins again. She places another incapacitated cicada in the chamber, lays another egg, and once again closes the entrance. There are records of several females constructing a tunnel together and creating individual birthing chambers. However they are considered “solitary” wasps. There is not a social system of caring for the young, nor a group of specialized jobs as found in colonial insects.

Once laid the egg hatches in two to three days and the grub feeds for about two weeks before spinning a cocoon that is suspended by silk in the chamber. Here it will winter over. It will emerge in June or July of the following year as an adult and the wasp’s lifecycle will begin again.

The cicada killer female clearly knows the sex of the egg, since she provides two paralyzed cicada for a female versus one for a male. Thus the emerged adult female cicada killer is larger than her male counterpart (C. Holliday).

On August 26th I was fascinated to see a wasp seize a cicada. The commotion and fight was like a lion taking out a Serengeti mammal, in miniature of course. It was gruesome as the wasp clung on, injecting venom into its victim. The noise of the cicada’s wings was very loud and the flopping about frantic. In fact I filmed it in slow motion so I could figure out what was happening.

I returned an hour later to find the wasp dismembering its prey. It was taking huge chunks of pink fleshy material out of the cavity beneath the swamp cicada’s legs. It even flew one of the victim’s wings around its quarry in a sort of victory lap—very grisly.

But wait a minute, this wasp was supposed to carry the carcass off, paralyzed, to a burrow. And on closer inspection I recognized that it was actually a European hornet, often mistaken for a cicada killer by a novice like myself. Alas, I still have not seen a cicada killer take down a cicada, but the entire affair, like all of nature, piqued my curiosity to learn more. I hope you too will delve into some of nature’s wonders as you wander about outdoors.