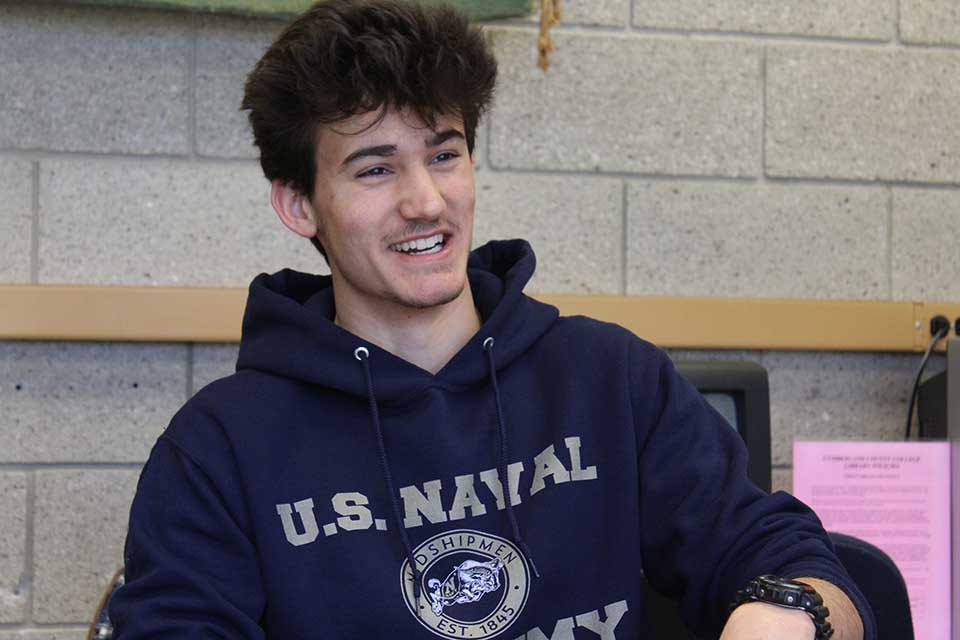 Time after time, Rowan College of South Jersey (RCSJ) students display dogged determination when it comes to achieving their dreams. Anthony Cervini can now be added to the list. The freshman was recently accepted into the United States Naval Academy (USNA), after being turned down the first time he applied.

Cervini, a mechanical engineering student, will begin his military journey as a plebe at Induction Day on June 30. He is an official member of the USNA Class of 2026.

It was not smooth sailing for Cervini when he initially attempted to get into the 176-year-old institution. However, the NJ Stars student did not allow that disappointment to define him and eventually used the setback as a pathway for success.

“I was right out of high school thinking I was some hotshot saying, ‘Yeah, I’m going to the Naval Academy,’ but I didn’t get in,” Cervini admitted. “Of course, it was really discouraging. It was my dream for so long. But I didn’t let that stop me.”

The Vineland High School (VHS) graduate pondered what went wrong and while searching for answers, he enrolled at RCSJ’s Cumberland campus, and learned what he needed to do to succeed. “One of my biggest weaknesses during my last application cycle was my standardized test scores. That’s something they value very highly at the Academy,” Cervini noted. “I just studied all the concepts on those tests on my own months before I had to take them again, so that I was prepared.”

The 18-year-old’s preparation and determination led him to reach the goal he had been dreaming about for 10 years, while also teaching him a valuable lesson. “I showed up and took the test and came back with a great score,” said Cervini. “It really taught me that if I’m willing to put that extra time aside to study and make those improvements, I’m going to get (positive) results.”

Cervini, whose father was in the Army and whose sister is in the Navy, discussed other challenges it took to get into the Academy. “It’s definitely not something that comes easy because there’s 16,000 to 17,000 applicants every year from around the world,” he explained. “My interview was a little over two hours long.”

Cervini also endured a Candidate Fitness Assessment that included pushups, a mile run, basketball throw and more. He also had to reach out to New Jersey Senators Robert Menendez and Cory Booker plus Congressman Jefferson Van Drew to receive a nomination to enter the Naval Academy.

The Congressman informed Cervini that he got accepted into the Academy, which left the student speechless. “I was actually on my way to class at RCSJ when I got the call from Van Drew,” the midshipman revealed. “I had no words. The only thing I could say was ‘Oh my gosh!’ I was a mess. I called my mom, and my voice was shaking all over the place. It was probably the happiest moment of my life. It was something really special.”