A Hobnob With Otters

The author and her Labrador retriever observe the North American river otter at work and play. 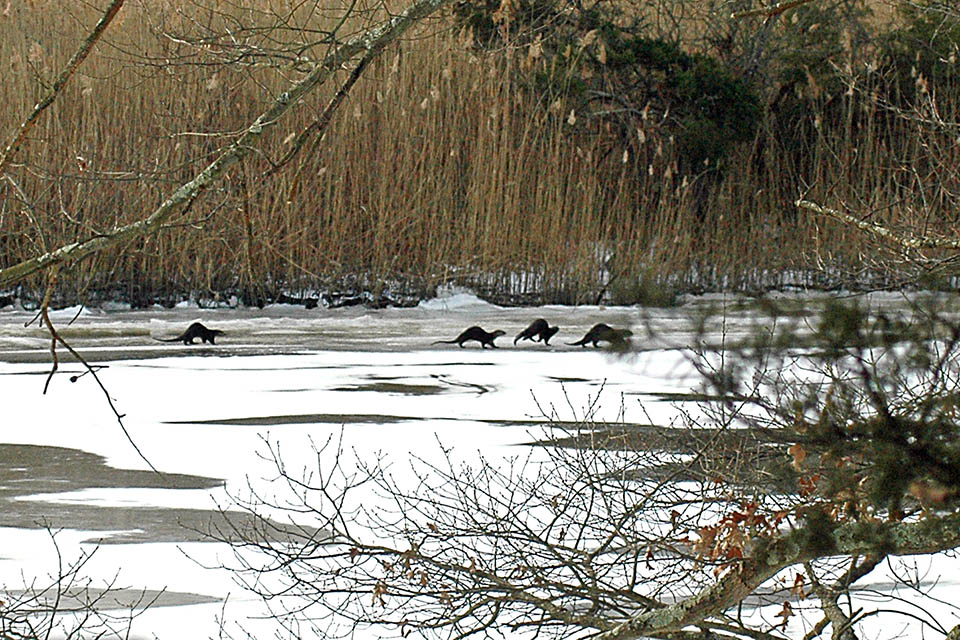 A litter of otter pups run along the frozen surface of the Manumuskin. Most of the play among young otters has the purpose of socialization, learning skills, and marking territory. Photo: Leslie Ficcaglia
by J. Morton Galetto, CU Maurice River

In 2001 my husband and I went to see a litter of yellow Labrador retrievers in Deerfield. It was a big litter and one was cuter than the next; the pups looked like a cross between a teddy bear and a polar bear. I said to the breeder, “Which one never leaves your side?” He simply looked down and there, sleeping on his feet was a contented ball of fluff. As we walked around looking over the brood, the breeder also moved. And when I looked down there she was again, lying across his boots. “That’s the one,” I declared to my husband, “Hobnob.”

Hobnob went on to trip us up for about 14 years, always plopping herself either on our feet or curled around her favorite of our three Brittany spaniels, Jersey. She was the English-style lab, a short-legged, 80-pound dog who never lost her puppy look or personality. Hobnob perfected the great art of doing nothing; she would not lift her head but simply followed everything with her eyes, until duty called.

Living on the Maurice River we discovered that her duty was rescuing anyone that she deemed to be in trouble. As she headed to swimmers she thought were at risk we would holler, “Grab her collar,” or she would drag them to shore by whatever piece of clothing or appendage she could seize. After fetching them to safety she would stand between them and the water, making sure they did not re-enter. Good swimmers would dive off the dock to escape her grip, only to find that she too would dive in and drag them to the ladder affixed to the dock, nudging them to climb out. We were never sure why certain people were considered to be in need of rescue, but when she got an intense look on her face we knew her lifeguarding skills were about to be unleashed.

One morning Hobnob and I went out to the dock to watch the river. Hobnob’s favorite pastime was observing. A little over 50 yards downstream, approaching on the incoming tide, was a river otter. She was floating on her back while using her chest as a flat surface for dissecting a mollusk. From the dock we watched her pass beneath us. As the tide carried her upstream we moved to see her reappear on the opposite side. Then Hobs’ expression changed; she got a look that would be equivalent to a person slapping his palm on his forehead in a “eureka” moment. Her eyes widened and eyebrows raised; she had a strategy. Hobs made a mad dash to our swimming beach to intercept that otter.

Even in fast mode Hobs always looked like one of the commercials that features a rescue dog in slo-mo, primarily because her pelt was always puppy-loose and moved about her in a gyrating fashion. I wasn’t sure how this was going to turn out but there was nothing anyone could do to stop Hobs’ pursuit. When she arrived on the shoreline the otter was in water at a level just under Hob’s chest. They began to frolic together. Rugged Hobs was no match for the otter’s acrobatic skills. The otter dove a few times and Hobs’ brow would look where the otter had submerged only to have the otter reappear, in a great game of Marco Polo. Hobs was clearly delighted by her new acquaintance. And then it happened: The otter dove and disappeared, as if a magician had vanished before her eyes. She looked down as her massive forehead sheltered her gaze: Gone—it’s gone, she realized.

The 15-foot deep channel in front of our home is no challenge for an aquatic mammal that can dive up to 60 feet, stay submerged for a quarter-mile, and reach speeds of seven miles per hour, so indeed she was gone! The playful twisting and writhing of its body in the water, powered by short webbed feet, is an otter trademark. Their long almost snakelike body will sometimes undulate like a mini Loch Ness monster. They can raise the front of their four-foot body out of the water up to their forepaws in order to peer about. Often they will vocalize like a bird, with whistles, or chuckles, clicks, growls, barks, or screams. One day we observed a young one emitting a raptor-like call as it looked for its litter mates near our landing. It moved upriver for many minutes, and even as it reached a half-mile away we could hear the poor lost soul calling. Once I lured a litter to the dock by imitating their sounds, and naturalist Clay Sutton witnessed this as we both chuckled at their surprise when they spied us.

Like beavers their nostrils and ears close when submersed. Their double coat is made of dense fine fur and a coarse guard fur. The thick hair traps air bubbles and keeps icy water away from their warm skin. One year on a freezing Maurice there were many ice floes drifting with the tide, and as ornithologist Clay Sutton was conducting a waterfowl survey for CU Maurice River he observed an otter taking a ride on one. The otter was very pleased with its ride, rolling about and then posing like a ship captain aboard his vessel.

Otters have good hearing and eyesight. However, if water clarity is hampered by dissolved solids from field and bank erosion their hunting can be compromised. The roots of vegetation are crucial for stabilizing soil; without root systems large amounts of dirt enter into storm drains and are transported into creeks and rivers. Vegetated river buffers are critically important in maintaining water quality; they hold not only soil but also the plants that filter contaminants from water before they can enter streams.

The gills of aquatic creatures can only tolerate a minimal amount of suspended solids. Since fish are a major staple in their diet, otters in tannin-stained or murky water are aided by their vibrissae, or stiff whiskers, that help them sense prey. They eat many other aquatic organisms including amphibians, turtles, snakes, shellfish, crayfish, crabs, earthworms, and a host of invertebrates. They also dine on birds’ eggs, baby beavers, and small terrestrial mammals, while plants are only a limited part of their diet.

Predators that pursue otter are primarily larger carnivores like bobcats, coyotes, wolves, and alligators, although young can also be taken by birds of prey. Their greatest threat is manmade pollution and habitat degradation. At one point in time trapping imperiled their population. Regulations and a dwindling fur industry coupled with conservation / reintroduction efforts have greatly improved their numbers.

Otter will mark their territory with drops from their anal scent glands, and males will make mounds of dirt to display scat. Much to my dismay my dogs think this is eau de parfum vs. toilette—oh, joy! I set up a little experiment to see what would happen if I raked a few mounds of wrack on our shoreline. I made two small hummocks, and by the next morning an otter had deposited scat on the little reedy edifices I had constructed. Thinking it might be a coincidence I experimented further by providing six. The otter did not disappoint, dutifully marking each one. We naturalists are all about scat, and some might say we’re “full of it.” We shall save that for another story.

Female otters associate with males primarily only during breeding season. Generally they breed in the late winter or early spring. Gestation is two months, but frequently birth doesn’t take place until 11 months later. Although the eggs are fertilized these are most often held before being implanted in the uterus. Typically there are two or three young but there can be up to six pups. They are born with fur but helpless, or altricial. The family is raised in riverbank dens or naturally hollowed-out areas near water. The mother weans them after three months. They will move from their natal range, or disperse from their home area, at six months to a year old. The mother must teach them to swim and fish. At two to three years of age they will raise their own families. In the wild they live to eight or nine years of age. In captivity they have been known to live up to 21 years.

North American river otters, Lontra canadensis, are present in most places, throughout North America from Canada to Mexico, with water and a permanent food supply. On our Down Jersey treks we see lots of signs of otter along local creeks and rivers, primarily scat piles and runs (animal paths). They are most active at night but we see them relatively often in daylight hours too. They are well-known for their playful behaviors, especially sliding on mud and snow. Many CU members have spied them along Millville’s Bicycling and Hiking path that follows the river from Union Lake Dam to Buck Park. So fetch a pair of binoculars and think of Hobs and me.