Propaganda from the World Wars included board games. 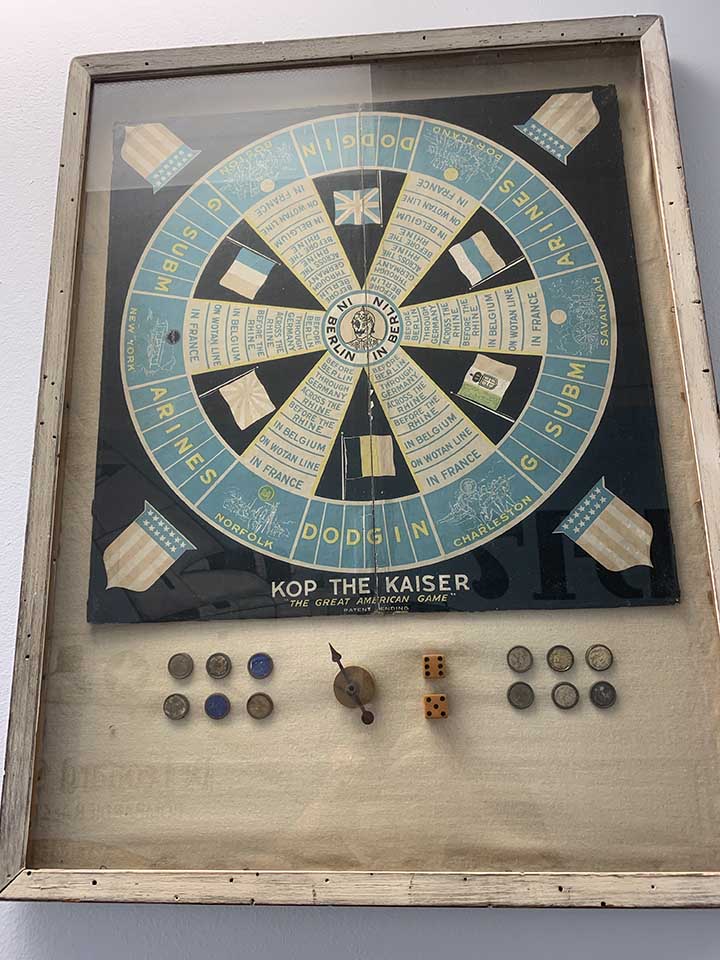 The gusts of wind and roars of engines whipped up daily at the Hammonton Municipal Airport by planes and helicopters leaving or landing are part of the sights and sounds shared with patrons of the Apron Café on the premises, but the restaurant’s walls are what offer an historical glance back at aviation’s legacy.

That glance includes a tribute to Dr. Leonard Streitfeld, a Hammonton optometrist who served as a B-17 Bombardier in the 8th Air Force during World War II. Another tribute honors Horace S. Carswell Jr. of the 374th Bombardment Squadron for his Medal of Honor mission against a Japanese convoy in the South China Sea in 1944 during which he was killed. And a third tribute commemorates the 1000th trap landing on an aircraft carrier of Navy aviator and air show performer Dale Snodgrass, who has been called “the Real Top Gun” and reportedly flew in some sequences of the Top Gun movie.

While these three individuals have local/national recognition for their flying, a fourth display at the café comes in the form of a long-forgotten board game called “Kop the Kaiser,” a sort of military version of “Candyland.” Released by Milton Bradley in 1917, the year the U.S. entered World War I, it allowed up to six players to compete in a mission to capture Kaiser Wilhelm II, leader of the German Empire, by rolling dice and moving across the board.

According to the boardgamegeek.com website, “The board has a circular track and six spokes leading inward to the center of the board. Each player starts on the space representing the headquarters of his branch (Boston, Portland, Savannah, Charleston, Norfolk or New York), and must complete a circuit of the board ‘Dodging Submarines.’ ”

The military branches represented on the board are Aviation Corps, Engineers, Infantry, Cavalry, Artillery and Marine Corps, each rendered with a graphic and identified by the city in which it was headquartered.

Once the submarines are evaded, boardgamegeek.com explains, a player “heads inwards on a spoke, along spaces marked: In France; On Wotan Line; In Belgium; Before the Rhine; Across the Rhine; Through Germany; Before Berlin; and, finally, the central space In Berlin, with a caricature of Kaiser Wilhelm. The winner is the first to reach the center circle.”

Although the game contains a “Patent Pending” notice, there is no publisher or copyright holder listed.

Proclaimed as “The Great American Game,” “Kop the Kaiser” was a bit of propaganda to spur on the war effort. But the U.S., it seems, was simply catching up to Germany. In 2010, the UK newspaper The Daily Mail reported that a “German First World War board game in which the aim is to destroy Britain” had been created in 1916.

The newspaper explained that the German game is titled Unterseekriegspiel or “submarine wargame” and “works like ‘Snakes and Ladders’ but the player uses a die-cast German U-boat as a game piece. The player rolls a dice and moves the piece around the board’s map landing on spaces that help or hinder their aim—to conquer the British Isles. The U-boat captain moves their playing piece around the British coast, taking out targets along the way.”

According to The Daily Mail, the game was manufactured by D&M Ludwigsberg as a propaganda piece designed to influence the younger generation of Germans at the time of World War I. “It is fascinating in that children who played this game in 1916 would be the right age to be U-boat crew in WWII,” the article observes. “It would have made children see Britain as an enemy—it would have been these children that would have fought more than 30 years later in WWII.”

Regardless of the intent at the time of their release, these board games unquestionably provided a safer way of waging war.