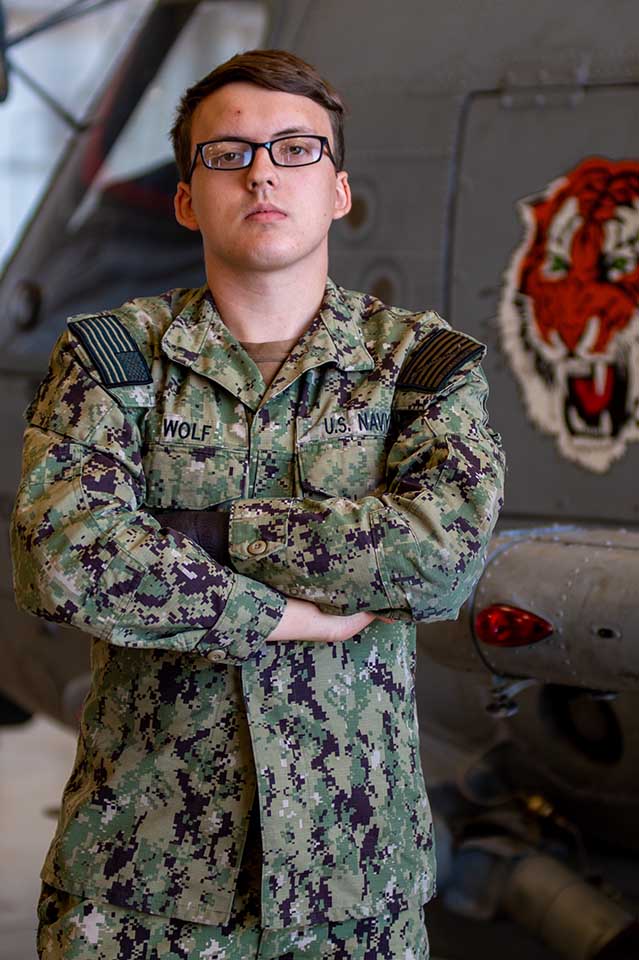 “I joined the Navy because I wanted to go on an adventure, and earn my degree while doing it,” said Wolf. “I also wanted an experience few people will ever have.”

Growing up in Pittsgrove, Wolf attended Shalick High School and graduated in 2020. Today, Wolf finds the values in Pittsgrove similar to those needed to succeed in the military.

“One of the biggest life lessons I’ve learned has been that attitude is just as important as hard work,” said Wolf. “Being motivated to succeed is contagious.”

These lessons have helped Wolf while serving at Naval Air Station North Island.

Wolf serves with the “Battlecats” of Helicopter Maritime Strike Squadron (HSM 73), a San Diego-based squadron that operates the Navy’s next generation of submarine hunter and Anti-Surface Warfare helicopter, the MH-60R Seahawk. Each helicopter is nearly 65 feet long, may weigh up to 23,500 lbs. (max gross) and can travel over 120 miles per hour for nearly 320 miles on a tank of gas.

According to Navy officials, the MH-60R is the most capable multi-mission helicopter available in the world today. It is used for a variety of missions, including hunting and tracking enemy submarines, attacking enemy ships, search and rescue, drug interdiction, delivering supplies and supporting the Navy’s special operations forces.

With more than 90 percent of all trade traveling by sea, and 95 percent of the world’s international phone and internet traffic carried through fiber optic cables lying on the ocean floor, Navy officials continue to emphasize that the prosperity and security of the United States is directly linked to a strong and ready Navy.

Wolf and other sailors have many opportunities to achieve accomplishments during their military service.

“I’m extremely proud of being named an honor graduate in my secondary rate training school,” said Wolf. “I worked very hard during that time and the hard work paid off.”

As Wolf and other sailors continue to train and perform missions, they take pride in serving their country in the United States Navy.

“Serving in the Navy means I get an opportunity to be a part of something greater than myself,” added Wolf. “I’m fortunate to experience something many people will never understand.”

—Story and photo by