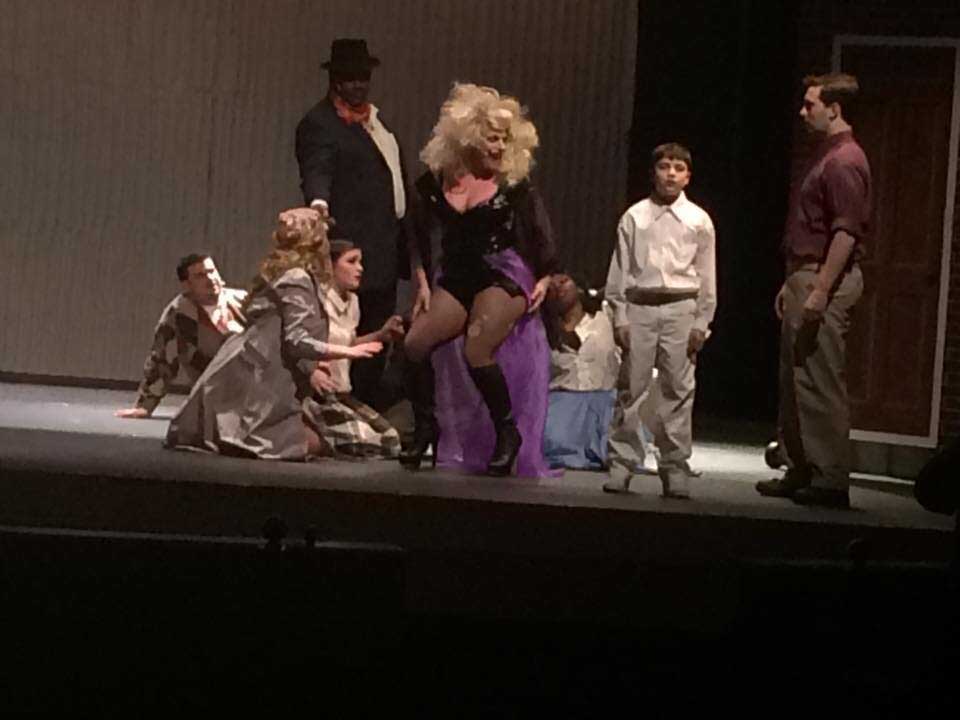 Mark the date: March 25. It’s the opening performance of the play, On Golden Pond, scheduled for a weekend gig at the historic Levoy Theatre in Millville. The performances kick off the 2022 season for the Off Broad Street Players (OBSP), the resident theater company at the Levoy. The production is the first of five in 2022. (Its February show was cancelled.)

Following On Golden Pond, the troupe will perform Frozen Jr, The SpongeBob Musical, Our Town, and then close out the season in November with Holiday Inn. The original lineup mirrors a typical season for OBSP—three musicals, two plays and one children’s production.

“We try to pick a varied season to appeal to many different types of audiences,” says Walter A. Webster, the founder and artistic director. “We also want to give actors a wide variety to choose from to come out and perform with us.”

Auditions are held two or three months before each production.

The troupe features a cast and crew from not only Cumberland County but from the rest of South Jersey and even the tri-state area.

“We think of each other as family,” Webster says. “We welcome new people into our family all the time.”

Jim Cook, Jr., has a different take: “I think the word ‘team’ better describes the experience. We work together. You can’t really choose your family, but you can choose your team, and they can choose you,” says Cook, who joined the Players in 2003 as a 15-year-old as a member of the chorus in The Music Man. “It set in motion a lifetime of memories and friendships. I’m 34 and I’ve done more than 20 shows with the group over the years.”

Says Nancy Bello, president of the Off Broad Street Players, “We have what I think is a great combination of members who return for shows here and there, people who are involved in almost every production as well as lots of new faces.”

Cook, who signed on for something to do in the summer before his sophomore year in high school, wrote two plays that OBSP produced, including an adaptation of A Christmas Carol, performed in 2010.

The Off Broad Street Players arrived in 1998 when Webster nurtured a germ of an idea to create a community theater. He gathered 10 supporters of the arts for the foundation. The Trinity United Methodist church in Bridgeton lent its support and just as important, its stage. The church on Fayette Street was located just off Broad Street, hence the name. The church boasted a six-inch-high stage, with curtains on the sides.

“Crews had to crawl through windows to get in and out backstage,” Webster says.

It wasn’t perfect, but it served its purpose. The group had always dreamed of one day having their own theater to call home. However, the desire to provide an affordable, quality theater experience to the community was and still is the organization’s first priority.

In 2000, OBSP found a new home—the banquet hall at Seabrook Volunteer Fire Company. By 2002, the players did so well they needed to increase seating for some performances, Webster said. They moved their summer musicals to larger venues beginning with the Frank Guaracini Jr. Performing Arts Center at RCSJ-Cumberland. Then, in 2003 with the need for a full professional orchestra, the group added Cumberland Regional High School.

In the spring of 2008, OBSP joined forces with the Levoy Theatre Preservation Society to help renovate the building. With the renovation completed, OBSP became the resident theater company at the Levoy. After 15 years of moving from venue to venue, OBSP finally realized the dream of having a permanent home.

To christen the theater, the troupe presented Neil Simon’s Brighton Beach Memoirs early in the fall of 2012. Cook, from Woodstown, wrote an original play about the opening night called Roundabout, produced in September 2012. The first musical was Annie in November of the same year.

“What a glorious and exciting opening night it was, when OBSP raised their first curtain on the 100-year-old vaudevillian stage,” Webster says.

“To finally have this beautiful venue to call home is literally a dream come true,” says Webster. “Yet all those other places taught us so much about having to adapt. We have dealt with not enough space backstage, improvising with lighting, no room for musicians, hardly any time in the actual space where we performed. They were wonderful steppingstones to bring us to this point.”

To sustain the OBSP, the organization has depended on grants, sponsorships, and other fundraisers. Having the Levoy in its corner hasn’t hurt.

“We now have so much at our disposal to create absolute magic with our shows. We have a full backstage with many options, advanced lighting and sound systems, a full pit for an orchestra and a stunning venue for our audiences,” Webster says.

For Cook, every moment with the Players is like a shot of adrenaline, he says. “Even in rehearsals. Walter holds everyone to the highest standard.”

You have to bring your A-game. No cutting corners. Cliches? Sure. But that doesn’t make them untrue. The parallels with Walter’s military service are unmistakable, Cook says.

“You have to be disciplined,” he says. “You have to be motivated. There’s attention-to-detail. Everything has to be precise. If you’re running out of energy, you dig deeper and find it. You have to be an analyst. You bring everything you’ve got. When the curtain falls, you’re completely exhausted and completely satisfied.”

For more information about OBSP, visit obsp.org. For the Levoy, visit levoy.net