Two years ago, 2020, marked the first time in birding history that the white ibis nested this far north. Global warming is suspected in the species expanding the northern extent of its range into New Jersey. 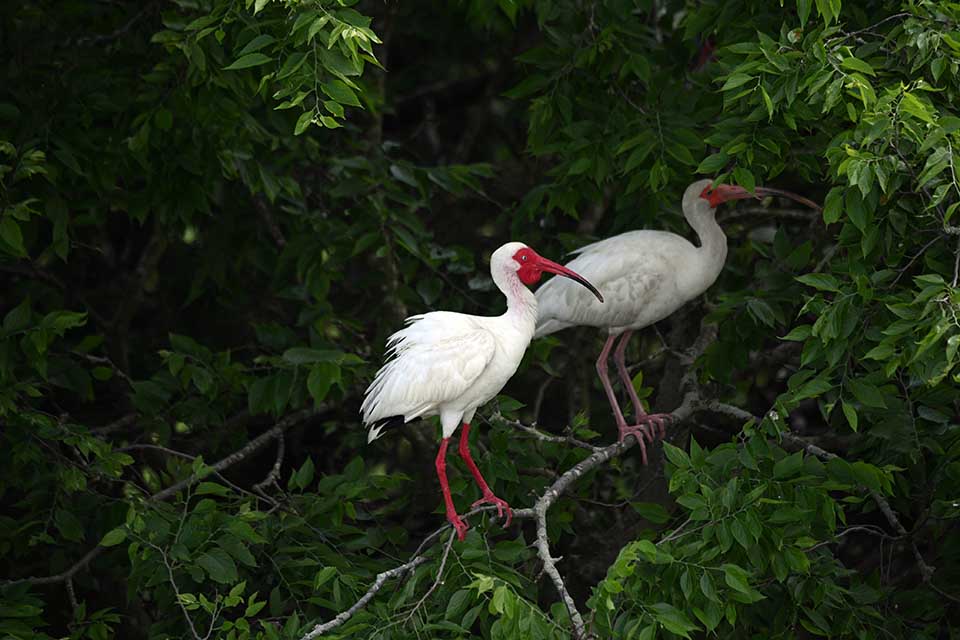 The ibis’ feet and beak become increasingly red with the onset of breeding. This pair was spotted at a rookery in Ocean City, NJ. PHOTO: J. MORTON GALETTO
by J. Morton Galetto, CU Maurice River

I spent much of my preteen years through early 20s visiting Ocean City, enjoying many hours fishing the bulkhead, observing wildlife, and riding waves, and then of course there were the evenings at the boardwalk. I remember cool mornings and nights as my absolute favorite times of the day. We stayed bayside and there was always the clamor of gulls, the smell of salt air, and a parade of boats.

As an adult I prefer going in the shoulder- and off-seasons when things are quieter. On the first Thursday in June a friend and I decided to have lunch in Ocean City followed by a nature trip.

The day started off cloudy and I hoped it would persist, but by late morning it was gorgeous and sunny. As we ate lunch the promised clouds started to reappear. I thought that would make for better photographs of our subjects, for they would be dressed like brides on a green aisle—or isle, as the case would be.

After lunch we headed back toward the mainland. Our goal was mid-way across the nearly three-mile-long causeway above Cowpens and Rainbow islands, the area that in my youth was called the 9th Street bridge.

Today’s causeway sports a 10-foot-wide multi-use path on its south side. Construction of two 55-foot-high spans did away with the drawbridges of my youth. I remember watching the bridge open from the back porch of our house, awaiting the reveal of large northbound vessels that needed it to be raised for their safe passage.

My friend and I reached our destination and leaned against the handrail, enjoying a bird’s-eye view of the shrubby trees beneath us on the marsh-encircled island below. The air was punctuated with the guttural nasal squawks of agitated herons, especially great egrets. These birds are known for their stealthy and solitary hunting style, but their nesting presence is anything but that. They are continually vigilant while guarding their nests, and intrusions call for a good scolding. Herons and ibis are colonial nesters and good habitat is at a premium along our country’s eastern coast.

I scanned the shrub-covered rookery and marveled that these birds had found their spot in the Great Egg Harbor Bay just beneath the Ocean City Roy Gillian Welcome Center. Cowpens Island to the east was historically utilized before the existing 2013 causeway, but overwash and vegetative changes have diminished its habitat suitability. Most birds have moved adjacent to the Ocean City Welcome Center.

Route 52 has spanned Great Egg Harbor Bay since 1937. The Bay is ringed by endless homes, and a Ferris wheel and water tower dominate this seaside resort’s horizon. Once upon a time these barrier islands belonged to the birds, but since the mid-1800s construction has displaced them. In the mid-1900s pockets of habitat still existed; most no longer do today. Many of the heronries have moved to small salt marsh islands in Barnegat Bay where they nest in marsh elder, poison ivy, or the occasional small cherry tree in the highest areas.

The rookeries’ inhabitants have suffered many other threats over the years, most notably the millinery trade of the late 1800s and early 1900s that nearly drove the birds, especially egrets, to extinction. During this period feathered hats were all the rage. Writer Herbert Job noted that in 1903 the price for plumes offered to hunters was $32 per ounce, which made them worth twice their weight in gold.

Job elaborated, “Here are some official figures of the trade from one source alone, of auctions at the London Commercial Sales Rooms during 1902. There were sold 1,608 packages of … herons’ plumes. A package averaged 30 ounces. This makes a total of 48,240 ounces. As it requires about four birds to make an ounce of plumes, these sales meant 192,960 herons were killed at their nests, and from two to three times that number of young or eggs destroyed. Is it any wonder that these species are on the verge of extinction?” (Ehrlich et al.)

Fancy breeding plumes are not molted at the rookery. Thus market hunters shot birds at breeding colonies where they were plentiful and sported their fanciest plumage. This caused the snowy egret’s population to decline by 95 percent!

The American Ornithological Society was formed in response to this mass killing of egrets and other birds. The organization’s advocacy resulted in the Migratory Bird Treaty Act of 1918. By the end of WWI, the laws protecting avian species thankfully caused feathered hats to fall out of fashion.

But nesting birds were still not safe. In 1945 DDT began to be used to kill mosquitos on the marsh. The pesticide worked its way from fish up the food chain. Egrets and herons eat fish, and DDT accumulated in birds’ reproductive systems, causing thin-shelled eggs. When the parent birds sat on the nest to incubate the eggs, they broke. By the 1950s the northeastern rookeries had all but disappeared.

DDT was banned in 1972 but its toxic remnants continued to plague wildlife, especially birds at the top of the food chain. Since then, rookeries have gradually reappeared in various places along the shore and where appropriate habitat exists. But New Jersey still suffers a dramatic decline in colonies. The birds are losing not only habitat but numbers as well. Currently one of the largest existing colonies is the one at the Ocean City Welcome Center.

Islands are selected by the birds because of isolation from predators and disturbances. There must also be ample food sources for foraging within a short distance. An island’s elevation plays a role in its vegetative sustainability. In the case of the Ocean City colony, Hurricanes Irene and Sandy (2011 and 2012) took down the tallest trees, thus leaving the existing shrubbier vegetation that herons prefer.

Reproducing en masse has long been a double-edged sword for colonial birds. Many eyes mean many sentinels to watch for predators, and also the ability to mob a threat. But en masse means you are also more obvious. Ground-nesting birds grapple with predation from raccoons, foxes, and feral cats.

For shrub and small tree nesters like those in the Great Egg Harbor Bay, likely predators are great-horned owls, or egg robbers like raccoons, boat-tailed grackles, and crows. Black-crowned night herons and large gulls are also notorious for eating eggs and chicks of other species. Further, there is a lot of competition for the best nesting spots and food sources.

Other aspects that plague these birds are disease organisms and parasites, long thought to have caused the abandonment of some nesting colonies.

On our recent visit, from the causeway we identified great egrets and yellow-crowned night herons on eggs. The egrets would rise up and inspect their clutch and give eggs the necessary rotations of incubation. Glossy ibis were busy building nests deep in the cedars. Others simply lounged on the treetops. Black-crowned night herons were courting. We saw a solitary tri-colored heron fishing in the shallows beneath the bridge.

A crow and red-winged blackbird were duking it out for a treasured spot on the railing. Boat-tailed grackles were cruising about looking for an unprotected nest to rob. Snowy egrets were plentiful. There is an egg laying order to what at first appears to be madness—great egrets are the first to nest, then little blue herons, black-crowned night herons, tricolored herons, snowy egrets, and lastly the ibis. By now all species should have nests. Being larger, great egrets select the highest places, well above ground predators and flooding waters.

Both male and female share nesting responsibilities, with incubation ranging from 21 to 26 days. Fledging or first flights vary from species to species between four and seven weeks. Six weeks seems true for most, with the yellow-crowned night heron being as short as four weeks and the great egret and glossy ibis as long as seven weeks.

There’s still time to view the marvels of nesting. Soon parents will be bringing back fish to feed the chicks—bending over and providing them partially digested food. Chicks are very engaging, and will soon be clambering about near their nests.

From the estimated 30-foot-high viewing area we see only the north face of the island, which extends 900 feet southwest and 1400 feet west. So the commotion we witnessed represented only a small portion of the colony. Below the viewing area is a walking path that offers a different vantage point. White ibis nest at lower levels and the path might present good views.

At the time of our visit these were the current celebrities on the site, and they were courting and tossing nesting materials about in what I suppose was a show of “I’d make a great provider.”

Two years ago, 2020, was the first time in birding history that white ibis nested this far north, and the first time in New Jersey! It’s a sad commentary on global warming but the birds have caused quite the stir among birdwatchers.

In 2020 only six adult white ibis were recorded, with one nest known to have failed. It appeared that seven ibis fledged in 2020. This year, Avalon has reported 300 white ibis. At the Ocean City Welcome Center, eBird estimates report an average 95 ibis over the last 60 days. Surely not all of those birds will be reproducing. But since the herons nest in mixed flocks, it raises concerns that our historic/existing suite of colony nesters might be displaced by the northern advancement of white ibis, especially since suitable habitat is at a premium.

The only sure thing about our coastal shorelines is that they are constantly changing as development, storms, and currents impact their elevations and vegetation. This causes the birds to be continually seeking suitable habitats. Protecting places for these birds to nest takes persistence by the Endangered and Nongame Species biologists within the NJ Department of Environmental Protection’s Division of Fish and Wildlife. And it takes willing communities to make it all work. A supportive public and a lot of advocacy are necessary for the survival of these species.

So now it’s your turn to visit the heron rookery. It offers a rare opportunity to view and photograph the birds without disturbing them, and late morning offers the best lighting. Grab your suntan lotion, a cap, binoculars, and a camera and head to the Roy Gillian Welcome Center. See the spectacular plumes of the breeding birds of our great American coast and marvel at their will to survive in the face of great adversity.