How a researcher tapped into the wisdom of forest communities—and helped change forest management strategies. 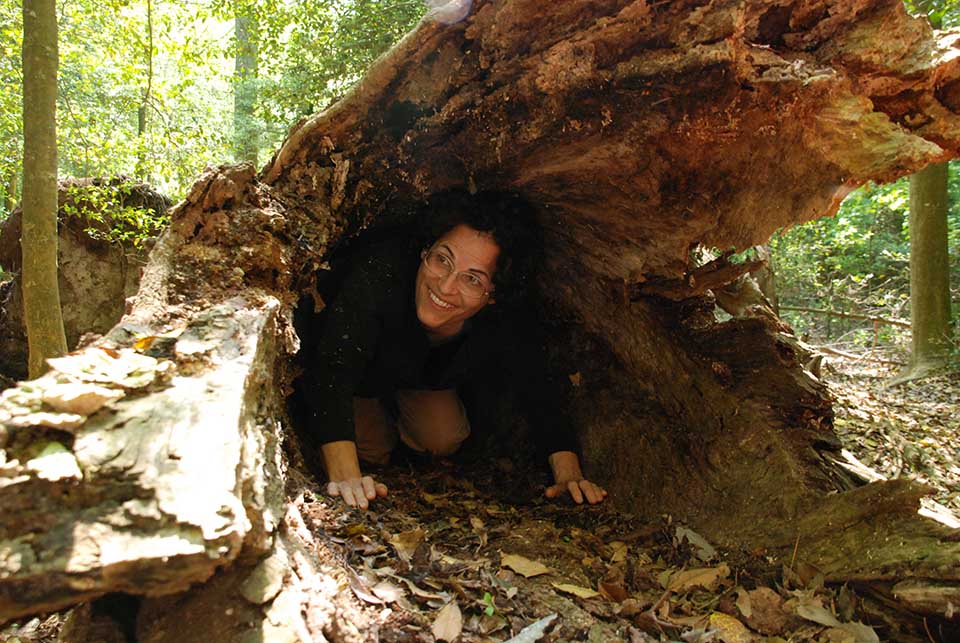 On a walk in Bear Swamp, Downe Township, led by Natural Lands a hiker climbs into the huge hallow of a fallen tree. This dead tree will support fungal decomposition.
by J. Morton Galetto, CU Maurice River

The first time I visited the primeval forest of Bear Swamp (Commercial Township) was back in the late 1980s. My husband and I went in on a cloudy day without a compass. We saw huge old growth trees and marveled at what we thought was a magnolia. An old forest somehow has a magical effect on people. But without the presence of the sun or a compass we got lost in the magic, and our joy turned to mild panic. We navigated out by following the back-up beepers from a sand plant’s front-end loaders. From there we walked a railroad right-of-way back to our car.

In 2007 I visited a different section in Downe Township with Steve Eisenhauer. We saw giant trees, many of which were in their final century of life. Snow and wind had destroyed much of their crowns but they were still omnipresent and stately in their haggard elegance and, as I would soon learn, more beneficial than first presumed.

Whenever we sponsor a giant tree walk with CU Maurice River members it fills to capacity a short time after being announced. When we’re on the trail and we see a massive tree, people are usually eager to encircle it. So when Suzanne Simard, professor of Forest Ecology at the University of British Columbia, wrote and released Finding the Mother Tree, it seemed likely that it would be popular. She had given TED Talks (Technology, Entertainment, Design) on YouTube and been interviewed many times after she published a study in the journal Nature. In fact James Cameron’s mystical film Avatar was inspired by her work, and more recently the bestseller, Overstory, loosely based one of its fictional characters on her work.

I thought that Finding the Mother Tree would be well-received but I hardly expected it to become a New York Times bestseller. Surely there is something in our psyche, dare I say, that links us to trees and forests. Surely there is good reason for us to feel conjoined. Our homes and so much of what’s in our homes are created from trees. Our ancestors warmed themselves with wood-fueled fires and cooled themselves in their shade. Our vessels were made (many still are) from wood. A number of our medicines derive from trees. And trees also sequester carbon, releasing clean air and adding moisture to the atmosphere. More people than you might guess are willing to admit a spiritual connection to trees. In fact many societies have an epistemology that is grounded in them. Poets, photographers, and artists clearly hold our leafy companions in great regard. Some of our most treasured poems, novels, and stories are tree-themed. And think about people’s reactions to trees, especially to large trees being felled. Visitors flock to national forests that have behemoth stately trees or colorful autumn leaves. Wildlife watching and trees are virtually synonymous.

I’m going to accept that I’m preaching to the choir, accept that you know the virtues of trees, and focus on Simard’s book and her conclusions. I didn’t expect her exposition to be intertwined with her life, but the associations she makes between her life and her discoveries help the reader to connect more easily with her ideas and findings.

Simard grew up in a lumbering family in British Columbia where trees and the harvesting of trees rule. Her grandfather had a log flume on the sides of the mountain and the family wrestled with the dangers of moving trees via booms on Canada’s Lake Mabel. They balanced on springboards to fell huge giants, like western white pines that would take two men two days to cut through. It was strenuous and dangerous work, the kind of work that builds respect for a forest. These trees were cut with manpower and harvesting was selective as opposed to clearcuts.

It was in Simard’s blood to become a forester. However, during the later years of obtaining her forestry degree she became disenchanted with the massive modern-day operations, primarily because of the “agency policies” that were free-to-grow. The free-to-grow concept viewed the forest complex as competitive rather than cooperative. So lumbering operations would clearcut forests and then agencies would require them to replant.

At face value this would seem wise and warranted, but the devil is in the details. Since trees were thought to compete for space and nutrients, a monoculture of the most desired varieties was planted after a clearcut. And to guarantee that monoculture, a herbicide developed in the early 1970s, Roundup (glyphosate), was used to kill any herbaceous competitors before planting the replacement forest. It was assumed that trees would grow more swiftly, to be harvested again in 100 years, without any competition. This was considered to be a well-managed forest.

Simard’s internships with a logging company gave her the job of checking clearcuts and reporting back on the health of the new monoculture forest. Her findings were dismal—a large percent of the new trees were sickly, if not dead.

She suspected that trees had an interdependence and that this interdependence was linked to mycorrhizal fungus. She devoted her life to making discoveries around this concept. Botanists before her recognized that plants were in a life-and-death interchange with fungus—a mutualism, with each relying on the other for an exchange of nutrients. Yes, some fungus is detrimental, but many have a beneficial and essential connection.

The reader follows Simard’s discovery process when she first pulled up saplings and found networks of fungal threads on the roots of trees that were doing better than those without the thread-like structures—hyphal branches. She began to study the fine details of these hyphal links; most are microscopic. And she suspected that they were integral to successful growth in a forest.

Foresters presumed that birches were a drain on the more financially desirable Douglas fir, and thus increased their investment in monoculture over mixed forests. Simard saw these reforested plots as failing.

As her life and professions evolved she was able to further test her theories, especially after she joined the academic world. She set up test plots of monoculture vs. three species growing together. By using carbon-13 and carbon-12 tracers she demonstrated that the birches and firs were exchanging nutrients, and that in different seasons the one was more reliant on the other. She equated this to communication, and considered that ultimately the fungal threads were the main vehicle of exchange. She also professed that over the long term the overall wood output of a mixed forest exceeded that of a monoculture. Agency people pushed back, but in time her studies and theories gained the respect of many foresters.

Simard’s theories flew in the face of accepted forestry practices that saw different species as competing, not complementing and cooperating as her studies indicated. As research evolved it was revealed that there was a critical chemical exchange of nutrients and carbon provided by larger trees to saplings. Young trees lack the canopy that creates the carbon sink necessary to sustain a robust life independent of a mature tree’s assistance. And in fact the large trees, called Mother Trees by Simard, nurtured not only their kin but other trees and species as well. A complex forest was a healthier forest.

Habitat considerations are paramount as well. The diversity of fauna species supported by a mixed forest, compared to a monoculture, is significantly larger. Further the mixture of understory and overstory species is necessary for diverse species use.

Mother Trees also have the deep root systems that help manage drought and redistribute moisture as well as carbon. Through the connection of their roots and the hyphal link/network, the largest trees help maintain the health of the younger trees, forming a community.

Policymakers began to revise their regeneration policy, reducing herbicide spraying by half. Simard’s work drove much of this change.

Throughout her book Simard makes observations about the similarities between humans and forests. For example: “…a cubic foot of soil is packed with a hundred miles of mycelium. A web of life like our own cardiovascular system of arteries, veins, and capillaries.” What we can readily see is the reproductive part of fungus—mushrooms filled with spores—but the organism is much larger beneath the ground.

When diagramming the forest’s Mother Trees and their kin, Simard makes analogies between the construction of our brain functions—our neurons and synapses—and the mycelium network of the forest, with the Mother Trees being the neurons and the chemical signals and exchanges through mycelium being the synapses. People use amino acids and proteins for brain functions, and plants use these to communicate. Arguably a forest’s chemical exchanges may just be a different type of thought process.

Simard’s descriptions of her family and her analogies to humans maintain the non-scientist’s attention, as well as being interesting to the scientist. While I’ve summarized an already very condensed version of her life and life’s work into a few brief paragraphs, the book is as well worth reading as her Ted Talks on YouTube are fascinating to watch. Take a look.