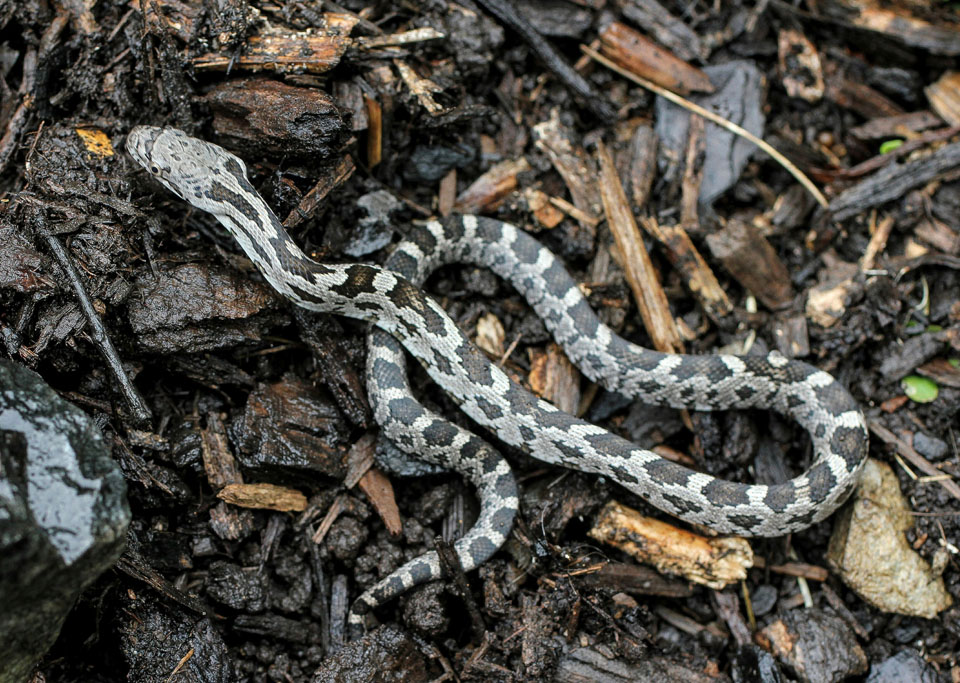 We left off last week with biologist and herpetologist Professor Howard Reinert, of the College of New Jersey, who once told me about the unique anatomy of the black snake at a Nongame and Endangered Species Advisory Committee meeting. I wondered how they can cling vertically to a brick wall with seemingly nothing to support them.

This is how he described their black magic (Halloween, remember?). He said they are not round in cross section like most snakes but are shaped more like a loaf of bread. Their flat stomach has an angled edge that they use to anchor to surface irregularities, thus they can cling to vertical surfaces that have even minimal texture. On a tree they can actually push their ventral scales into the crevices of the bark, sort of like a dove-tailed joint on a drawer.

Further, he explained that the muscle structure from their backbone to the ribs incorporates more vertebrae than terrestrial species, which I assume allows them to reach out to explore the next crevice to which they will anchor. As if that weren’t all magical enough, their heart is placed closer to their head than other snake species.

“This keeps blood flowing to the head and the lungs instead of allowing gravity to pull the blood down toward the tail as happens in most snakes when they are held in a vertical position. Isn’t that all pretty cool?” he asked me. Yes, Howard, it really is!

Snakes come out of brumation between March and May. After a few weeks, males attract females by releasing pheromones. A male will line up next to a female and insert one of his hemipene (yes, he has two!) into her cloaca, anchored by several spines. Two allows access from either side of his vent. The mating lasts a few minutes to a few hours. After about five weeks the female will lay 12 to 20 eggs in a hidden spot like a hollow log, mulch pile, depression, or abandoned burrow. About two months later the 13-inch patch-marked hatchlings will emerge. Doubling their size quickly, they are predated upon by birds and other snakes. At about four years old they become sexually mature. As adults their color is black with a white chin and when stretched out you can see some white on the edges of their scales, although often these are not visible. Some sources estimate their lifespan to be into the 30s.

The major threats facing rat snakes are forest fragmentation from development and roads, off-road recreation, road mortality, poisons used on rodents, and deliberate attacks and/or poaching by humans. Remember that the 18 species of snakes in the Maurice River watershed are non-venomous. Each plays an important role in nature. So treat them kindly by leaving them alone. n

NJ Guide to Reptiles and Amphibians, NJ Fish and Wildlife

Special thanks to Howard Reinhert