A giving story that will tug at your heartstrings—and maybe your shoestrings, too. 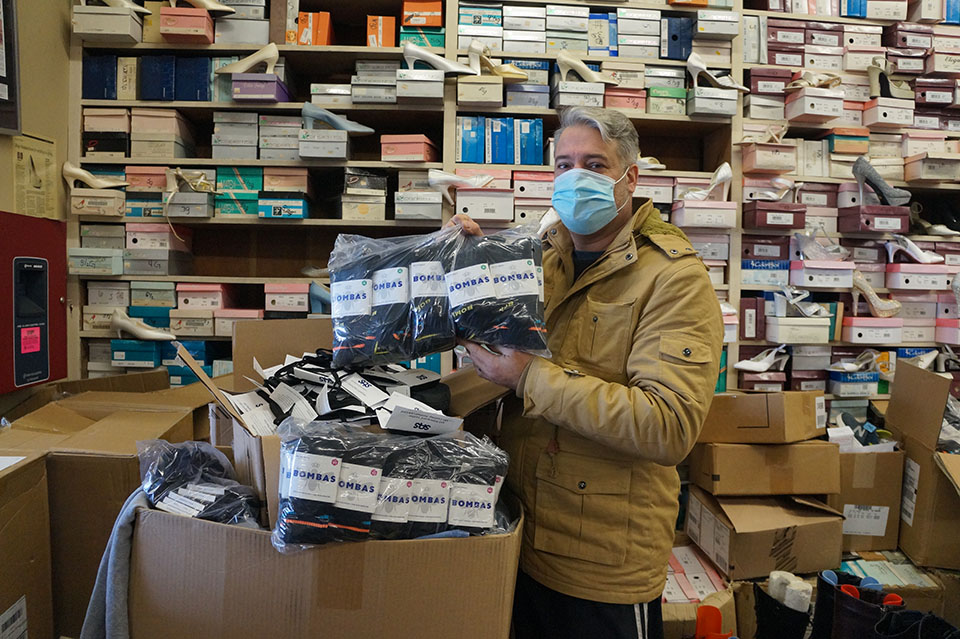 Brian Lankin, owner of Al’s Shoes on The Ave, unpacks a generous donation to his annual drive. PHOTO: AHMAD GRAVES-EL
by Ahmad Graves-El

Christmastime has historically been used by many as an opportunity for thinking not of one’s self, but of others—especially of those in need.

For the last several years, Brian Lankin, president of Al’s Shoes on Landis Avenue in Vineland, has used the holiday season as an opportunity to donate thousands of shoes, socks, and laces to those in need in South Jersey and beyond.

The reason Lankin, a Buena resident, began donating the footwear may tug at your heartstrings.

“My mom (Theresa) died from ovarian cancer in 2006,” says Lankin. “My parents were an old school couple. My mom grew up Italian Catholic and my father was Jewish, and he became Catholic.

“They had a deep faith [in] community. My parents left me a blessed life and I wanted to honor them.”

Al’s Shoes has been open for business since 1979. Lankin took over as president when his father Al passed away in 2008.

That year, with the help of former Vineland Mayor Robert Romano, Lankin made his first, extensive foray into the world of charitable giving.

“Me and Mayor Romano … for Christmastime, the city workers would come to the store and take 100 to 200 shoes to City Hall,” says Lankin, “and then the people that were in need of shoes would go to City Hall [to pick them up].”

That same year, he donated shoes to children from a country the United States had been to war with twice.

“One of my good customers, Lou Amico, was an army reservist. He knew my father was in the army,” says Lankin. “…[H]e asked me to donate 200 shoes to homeless Iraqi kids. He said a lot of them didn’t have shoes or socks.”

Because of Lankin’s good-hearted nature, when called upon by Amico, he did not hesitate to help those children in need.

Another time, he graciously assisted children known by his former neighbors at The Amish Market.

“Some of the (Amish) children in Lancaster, Pennsylvania, needed shoes, so I ended up sending like 300 pair, the first Christmas season the Amish were next door,” Lankin says.

In 2018, with the help of some friends, Lankin began to ramp up his charitable efforts.

“I had four friends that came to me, Nick Buono, Brenda Gervato, Shelley Savage, and Cara Vivarelli O’Neill [who said] you should make this a community project.

“So, that’s when we came up with the idea every $10 equals two pairs of shoes donated.”

One of those friends believes Lankin gives that group of four a bit too much credit. “I planted a seed; gave him an idea,” says O’Neill, former Vineland resident and longtime customer of Al’s Shoes.

“Maybe I even watered it with encouragement and praise along the way,” she continues. “But the growth is Brian. This is simply Brian being Brian. He makes things happen for the community of Vineland.”

What started off with 100 to 200 pairs of shoes donated in 2008 has grown into something much grander.

“Last year it got so big,” says Lankin, who’s also chairperson of the Vineland Downtown Improvement District, “I had like 30 to 50 charities come and pick them up, themselves.”

Some of the beneficiaries of Lankin’s goodwill include The Salvation Army Vineland, Spirit and Truth Ministries, Big John’s Pizza Queen, in Vineland, and The Guidance Center–Mental Health Services for Southern NJ.

The list also includes West Avenue School, in Bridgeton, which, he delightfully notes, asked him to speak at this year’s African American Read-in, held in February.

Each year, Lankin, a former Vineland High School swimmer and part of a record breaking 200 free relay team in 1993, donates the footwear in commemoration of people who have passed away and were instrumental in helping him become the upstanding citizen he is today.

In 2018, he dedicated the donations in honor of his parents, his father-in-law Lou Harvey and his uncle Rick. 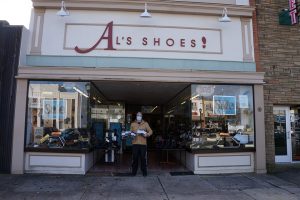 The respect given to his deceased family and friends, in the name of making donations for a great cause has left a deep impression on some of those in his circle.

“When Brian told me he wanted to honor my father Vince and brother Vinnie with this program, I was extremely emotional and proud,” says Felicia Gonzalez, who’s known Lankin for 30 years. “Both my father and brother were two men with hearts of gold.

“I felt it was a beautiful tribute to my family.”

When Lankin was having trouble figuring out what sport he should participate in in high school, Vince gave him some sound advice.

“Her father, who was the vice principal, mentored me my junior and senior year,” says Lankin. “He told me to do what I was good at, and don’t be a follower.”

Gonzalez, a teacher in the Vineland Public School system, is playing a big role in helping Lankin spread some holiday cheer.

“Felicia … came and got 100 (pairs of shoes) already for Big John’s Pizza Queen,” says Lankin. “And then she’s [going to] bring 100 to [a] charity Carol Bassetti’s working with. And she’s trying to find a third one.

“She wants to do 300, she wants to be the one that delivers the most shoes!”

Lankin also gives a shoutout to Lori Pepper, with St. Isidore’s, for her work delivering the footwear to children in need and Bombas apparel for donating nearly 6,000 pairs of socks this year and last.

When asked how his parents would feel to know their son is doing his best to help those in need, he pauses for a moment, then says, “I think they would love it.

“Well, my father was a proud Vineland High graduate. He served [in] the army. He was an original Vineland Downtown Improvement District board member. So, my dad believes in community service.

“My mother would give the shirt off her back to help people,” he continues. “My mother was very giving. It was just a way for me to honor my parents, is how it started.”

Lankin’s longtime friends are appreciative of his charitable contributions to community members.

“Each year, I anxiously wait to see what he’ll do with the project—and just how big it will get,” says O’Neill. “Brian is a model member of our community and his willingness to give back is truly inspiring. He is the reason my family will always donate to the Christmas Shoe Donation.”

“I am so proud of Brian for all he does to help those in need,” adds Gonzalez. “It is such a great way to continue the legacy of his parents by helping the community in such a special way and touching the hearts of so many.”

So far, Lankin has raised more than $10,000 and his goal is to donate more than 3,000 shoes this year, which would be the highest total, so far.

“Oh, I love it. It gives me purpose,” Lankin reveals, when asked how it feels to play such a prominent role in spreading holiday cheer to those in need. “I come in here early. I leave late. I’m not reading the newspaper. I’m not watching TV. I’m not drinking alcohol.