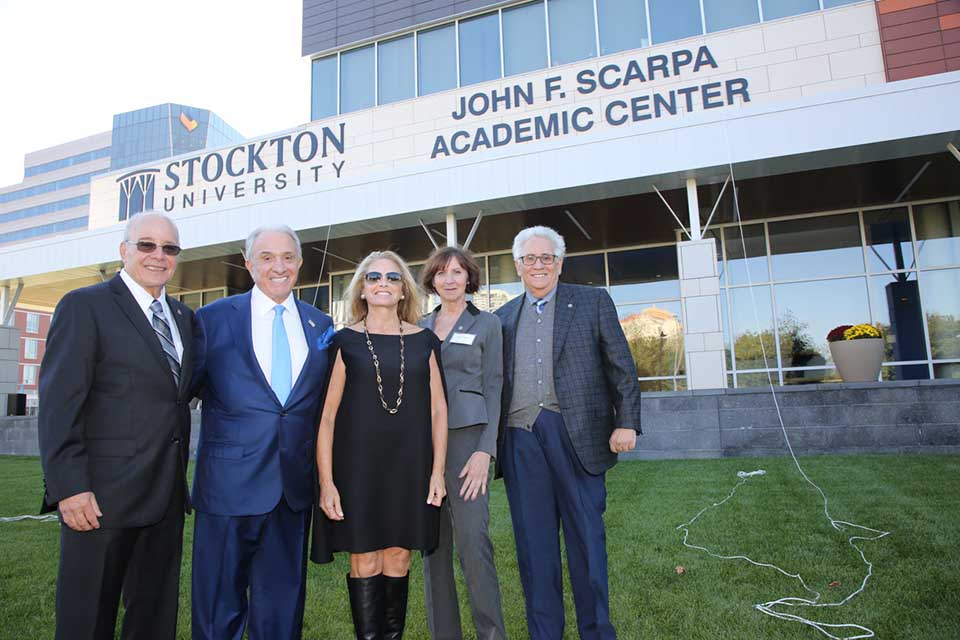 September and October were busy months for philanthropist John F. Scarpa, a native of Vineland. Stockton University dedicated and named two buildings in recognition of the John F. Scarpa Foundation’s donation of $8 million to the school. Just prior, Scarpa attended a similar dedication at Villanova University’s Law School, where he made a $15 million gift in September.

Stockton recognized Scarpa’s donation by naming the Academic Center on the Atlantic City campus and the Health Sciences building on the Galloway campus after the entrepreneur. Stockton President Harvey Kesselman said that no other donor has made a larger contribution to the school, and presented Scarpa with an honorary doctor of public service degree.

“Through hard work and good fortune, I’ve enjoyed many blessings throughout my career,” Scarpa said. “I still think of myself as a kid from Oak Road in Vineland, NJ who ‘done good.’ I always remember my mother telling me, ‘You don’t need that much money, so take care of your family and go help other people.’ It sounds simple, but that remains my focus.”

Scarpa was an entrepreneur in both the cable television and cellular communication industries. While in the cable television business in the late 1970s, he was instrumental in establishing the New Jersey and the Northeast Cable TV associations. His groundbreaking work in cellular communications began in the early 1980s when he co-founded and served as president and COO of American Cellular Network Corporation. His company became the first publicly traded cellular telephone company in the U.S.

Scarpa co-founded Unitel Wireless Communications Systems, where he helped build and manage cellular telephone systems. He was one of the original members of the national Cellular One Network.