Once used to decorate at Christmastime, princess pine is best enjoyed in its natural woodsy environs. 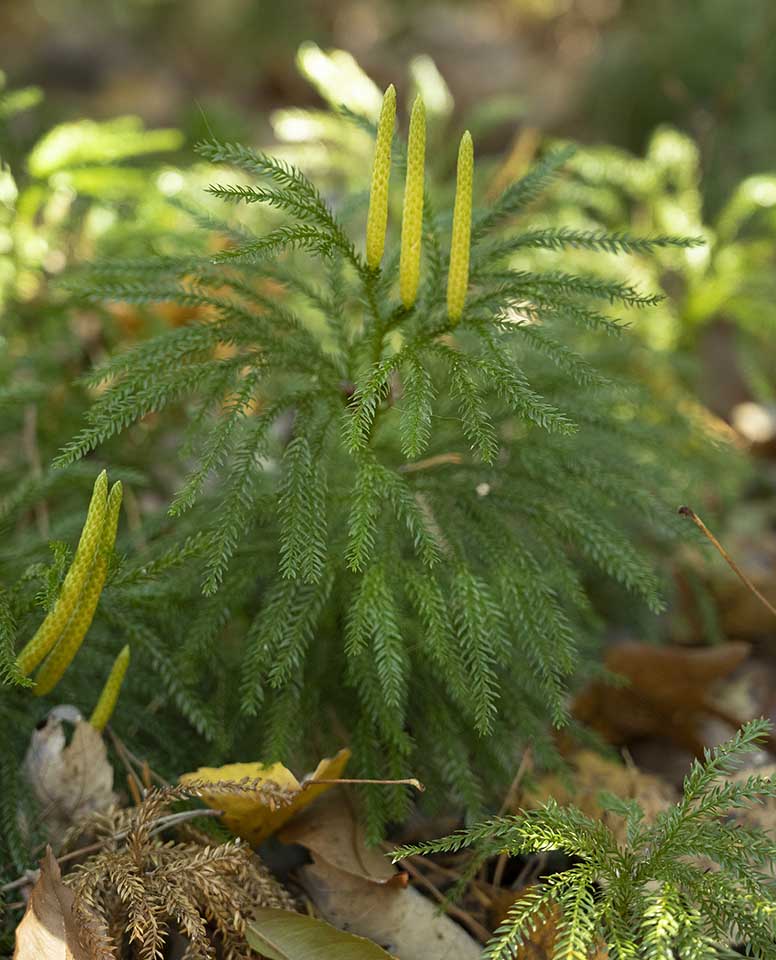 Princess pine, shown here with its candelabra clubs or strobili, which contain reproductive spores. This plant has long been associated with Christmas. PHOTOS BY AUTHOR
by J. Morton Galetto, CU Maurice River

As the deciduous trees shed their leaves and we enter winter, we are left with a greater appreciation for the evergreens that give color to an otherwise somewhat monochromatic and gray viewscape. The pine trees in the landscape stand out with their green needles, but you may notice on the ground what looks like mini palm/pine-shaped evergreens. You might know them as princess pine or ground cedar or maybe you have mistaken them for pine saplings, but they are club mosses. In Latin they are lycopodium, and our primary subject species is princess pine or Lycopodium obscurum or Dendrolycopodium obscurum.

These are not the mosses that are non-vascular, since club mosses do have a transport vascular system allowing them to access sugars and water. They are more closely related to ferns and are often referred to as “fern allies.” Larger and taller than mosses, they reproduce via spores. During the Carboniferous era some 360-286 million years ago, their ancient predecessors towered 130 feet tall and five feet in circumference. Today’s veins of coal are the result of dead plants decaying into peat and then converting by heat and pressure into a fossil fuel.

My knowledge of princess pine is more closely associated with the Christmas holiday than to Carboniferous era occurrences. We used to go to a Pendergast nursery and garden supply business in Cresskill, New Jersey, where they had a panoply of Christmas decor options. We would search the cut pines under the glare of the bare-strung lightbulbs that I associate with used car lots. Young men would pull a tree from the stacked assortment, shake it to encourage the boughs to fall, and my mother would nod yes or no until she had it narrowed down to a couple. Then we would all chime in, “Hmm maybe,” or “It’s perfect, Santa will love it!”

Afterwards we would go look for greens to decorate the mantle, door, and such. On occasion Pendergast’s would have roping made out of princess pine. My mother would wind this on the rail of the stairway or weave it among some of the objects on the mantle. But what my sister and I remember most clearly is her placing it bunched like a bouquet in a bowl and hanging tiny Christmas balls on it.

The most memorable thing about Pendergast is that they had a live manger, complete with sheep, shepherds, camels, wise men, Mary, and Joseph. No baby Jesus until Christmas eve. Now I was all about the camels, because frankly it was likely the first time I’d ever seen one. We also discovered that camel can spit, as that is exactly what one did—spat on my mother and landed one right in her hair. The not-very wise men camel handlers should have known better than to let a camel get away with that! When I was young, my mom was pretty glamorous; she was a former model and very stylish. Camel saliva simply didn’t complement—or compliment—her attire and she was really put off by this dromedary’s behavior. Afterwards my mother insisted we keep our distance from camels, which is pretty easy to do when you live in New Jersey.

In coming years my mother focused on the holiday decorations and stayed away from the live manger. I, on the other hand, had to challenge fate and go give the camels the evil eye each Christmas: “Don’t even think of messing with me or my mom!” I guess at seven years old I fancied myself a future camel handler.

I had a renewed interest in princess pine as an adult; when doing my own decorating, I too made up a bowl of it and adorned it with tiny ornaments.

But things really came full circle for me on a walk, about a decade ago, with botanist Gerry Moore at a preserve along the Maurice River. We came across a stand of princess pine and he wondered whether this plant was in fact common or rare. He also relayed that early photographers used its spores for flash photography because of their high oil content. Spores have also been utilized in fireworks and to produce the illusion of a lightning storm in stage productions.

There are many species of club mosses and their applications are numerous. Human uses go well beyond decorative and pyrotechnics into the realm of the pharmaceutical. The list of herbal and Native American remedies are numerous, including (but far from limited to) urinary tract infections, inflammation, emetic, many feminine reproductive issues, digestive problems, headaches, cold treatments, and skin ailments. Spores repel water and have been employed to relieve skin rashes, in particular on baby bottoms. Pills have been coated with spores to prevent sticking.

In modern times there is a lot of interest in the antiviral properties club mosses possess, with some speculation regarding HIV treatment and immune system stimulation. Homeopathic uses include liver and gallbladder problems, blood poisoning, respiratory inflammations, and inflammation of female reproductive organs (J. Meuninck).

Today certain club mosses and related fungi are being investigated and employed in the treatment of Alzheimer’s disease. Opinions differ greatly on the efficacy of huperzine A, the active ingredient found in a Chinese species. Online it is sold as a memory-enhancing supplement.

Regardless of a litany of potential efficacies, know that the plant is toxic, although the spores are evidently benign. So to be safe only professionals should administer it or experiment with its possible positive benefits.

I have walked through a patch of princess pine to find my slacks died yellow by the spores. However I’m reluctant to pick it because of the number of plant societies anecdotally reporting populations that once existed are now gone. Furthermore, distinguishing it from Dendrolycopodium hickeyi, listed as rare in New Jersey, is currently not in my wheelhouse of expertise.

Deforestation and changes in acidity impact lycopodium, therefore runoff from lawn products like lime change the soils it thrives in. Collecting it for decorative purposes is thought to have impacted it in some areas. Botanists relay that it is a very poor candidate for transplantation. Apparently, some states consider it rare.

I still like to examine it on a woods ramble, with its lovely little candelabras or clubs, called strobili, which release the spores. Another club moss is ground cedar, running-cedar or fan ground-pine (Lycopodium digitatum); it too has the clubs. At first blush people mistake it for princess pine, but its leaves are flattened and scaly and if you pull on it slightly the runners are on the surface. Princess pine is more tree-like in its appearance.

I’m not familiar with the various species of lycopodium in our area but L. obscurum is prevalent. It exists in states east of the Mississippi River, excluding Florida. It is additionally found in Minnesota and Alaska, while in Canada it occurs in Ontario and eastward.

For me and many others, princess pine denotes Christmases past and it is a nice surprise on walks in our local woods. I hope you have enjoyed it too and that we continue to come across it for many years to come. Happy holidays!