Fallen But Not Forgotten

A picture-perfect Memorial Day weekend includes an adventure with our national symbol that would not have been possible a few decades ago. 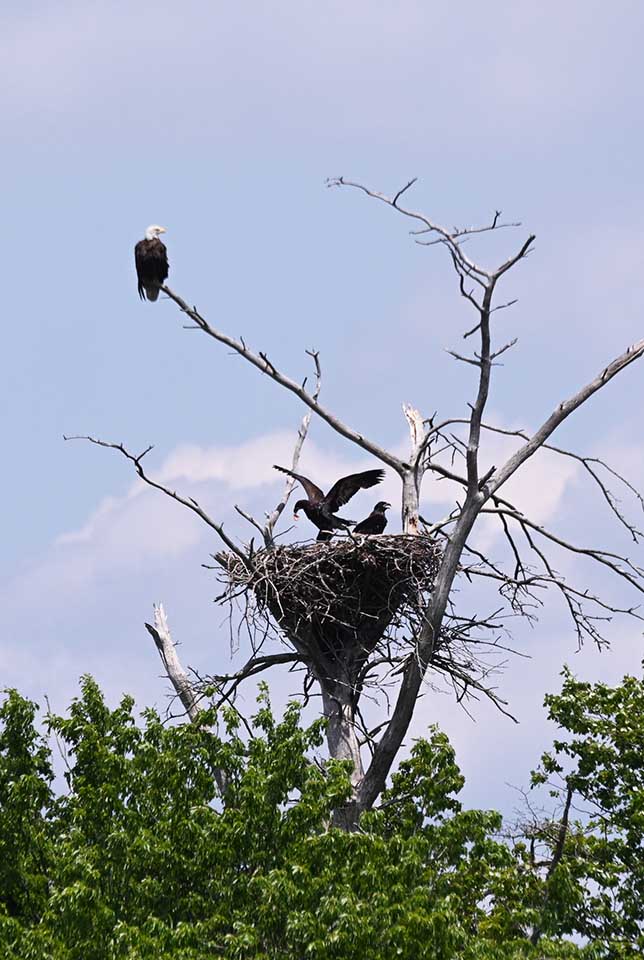 This pine tree, directly across the river from the author’s home, was alive a few years ago. It has since been feared that the tree or the nest would fall during nesting season. Here, one young chick exercises wings to prepare for fledging. Photo: J. Morton Galetto
by J. Morton Galetto, CU Maurice River

My husband Peter and I live on the west shore of the Maurice River and it presents lovely panoramas of sunrises and sunsets, as well as many wildlife viewing opportunities. For many years we have had two eagles’ nests visible from our property. One is about a mile upriver, on the western shore of the Nature Conservancy Bluffs Preserve, and the other is on a southern section of that same preserve on the eastern shore, about 300 yards across the river from our landing.

For 36 years I have been involved with a local watershed/conservation organization called Citizens United to Protect the Maurice River and Its Tributaries, Inc., generally shortened to simply CU Maurice River. For 35 of those years I have had the pleasure of interacting with ornithologists and consultants Clay Sutton and Jimmy Dowdell, who have conducted an annual survey of wintering raptors and waterfowl on the river. Theirs is the longest running consecutive monitoring of regionally significant birds in the nation. The methodology employed is basically nine viewing locations, observed for 45 minutes each, on eight dates—for a total of 341 surveys since its inception in 1987. This has allowed them to draw conclusions that we never would have dreamed possible when they began this work.

My purpose is not to tell you about the survey; Clay already wrote an article about it that appeared in February of 2022 for this publication. Rather I wish to relay a Memorial Day story. Like all good stories it has its beginnings and often no true ending. So let’s get started, shall we?

On Feburary 11, Clay wrote to me that during a survey point from our dock they had discovered a third nest to the north of our property. Later I measured this to be 0.8 of a mile away. When the trees were leafless it could be observed using a spotting scope. But as the spring progressed and the trees leafed out, the nest was obscured and difficult, if not impossible, to pick out. It sits on a very deep marsh, with ditches that can only be navigated in a shallow draft boat at high tide.

On Saturday, May 28, of Memorial Day weekend Peter and I were checking osprey nests for eggs and chicks in order to plan our banding strategy for June. When we came to the marsh’s edge we could not make out the eagles’ nest, even though we were only about 300 yards away. The tide was high so we decided to navigate the ditches to view the subject sweetgum tree closer. We found an adult female guarding the tree but no nest. Peter felt confident that it was the correct tree and the female’s behavior seemed to support his assertion, for she remained vigilantly perched even though we were only about 100 feet away. This led us to believe that a chick existed, despite a possibly fallen nest.

The draft of our boat would not allow us to get close enough to traverse the cattails near the nest. Peter made two failed attempts to cross the marsh by foot, but he soon found himself chest-deep in mud. With a receding tide, he wisely abandoned the mission. A loss of water in the Maurice River would have meant a 10-hour vigil until the incoming tide would permit us to escape the marsh. This would have also lengthened our disturbance time, which can cause great stress to the bird, and likely abandonment of the chick if present.

I thought about the time some 20 years ago when a Coast Guard helicopter plucked a duck hunter off the same marsh plain in colder weather so that he wouldn’t suffer exposure to the elements.

Later I described to Peter a cartoon that I had seen in an old issue of Field and Stream. It pictured a duck hunter being airlifted from the muck. His bib waders remained planted in the mud beneath him and his suspenders stretched skywards; I believe his briefs were polka dotted.

We theorized that the windstorms of Mother’s Day weekend had brought down the nest; on May 7, peak gales had reached 49 miles an hour.

New Jersey has a program of volunteer nest monitors who report to Larissa Smith of the Conserve Wildlife Foundation. For many years we have kept both Larissa and New Jersey Non-Game Species Program, Division of Fish and Wildlife, DEP aware of any chick counts, newly discovered nests, or unusual occurrences that we observed. After we docked our boat, I called to tell her we felt with some certainty that this nest had fallen.

Larissa was very concerned about the situation and duly arranged for a possible rescue mission on Sunday, May 30. She, her husband Matt Tribulski, and volunteers John King and Wayne Russell came in two small Jon boats. We escorted them through the marsh to the suspected nesting tree. They were able to get closer to it and began to cross the vegetated marsh plain.

When a nest falls there are a number of scenarios that might ensue if chicks are present. Sometimes chicks are crushed by the nesting materials, sometimes they survive and are abandoned, and in rare instances the chicks are raised on the ground. Since we already knew this nest had one large chick we felt checking the situation was warranted. If the chick was injured it might be possible to rehabilitate it.

The three volunteers entered the marsh. We were observing their progress and awaiting their discoveries when it was suggested that a canoe might enable them to transport an injured bird out over the vegetation. We told them our property was closer than the public ramp at Fowser Road in Millville, where they had a canoe, so we left to fetch ours from our landing. In the time it took us to ferry the craft back to them they had reached the bottom of the tree, at which time, from our vantage point, we could see an immature bird fly out of the forest edge at about eight feet off the ground in what appeared to be its first flight. It flew about 600 yards, doubled back, and perched about 400 yards north of the nesting tree.

It is very difficult for a young bird to take off from a low perch especially for early flights. In fact some large species of birds like condors and gannets rely heavily on cliffs in order to launch into flight. The adrenaline boost from the intruders was a push-comes-to-shove situation for this fledgling. She flew low but strong, although a bit wobbly. I felt with some confidence it was a female because it was a massive bird, and male eagles are smaller.

In those moments, witnessing her first flight, I thought, “Wow, what a Memorial Day weekend! The weather was spectacular and we saw a bird fledge after we had feared the worst. Like our veterans these adult eagles stayed the course, and like our lost soldiers on Memorial Day the chick was “fallen but not forgotten.”

When we reconvened, we learned what Matt, John, and Wayne had discovered. Beneath the nesting tree lay a pile of sticks, and lying adjacent to the debris was a large uprooted tree. The roots were covered in down that fell from the young chick as her flight feathers replaced them. The adults had raised this baby on the fallen tree’s root mass! And it survived to make its maiden flight. The chick was especially large and, like all young eagles, dark and without the white head we associate with our national symbol—but majestic just the same. We did not see the mother of the chick when we first arrived; she was either obscured or at some point flew into the nesting tree. Away from her lookout, she scolded the intruders from above and warned her chick of their encroachment.

We exchanged further observations and then thanked Larissa and her rescue crew. And with this story I memorialize a day that I shall likely not forget!

This coming year I will be stepping down from my seat on the Endangered and Nongame Species Advisory Committee, a post I will have held for 35 years, since our committee recently instituted term limits. It has been the efforts of the N.J. Endangered and Nongame Species Program, CU Maurice River, and Conserve Wildlife that have pointedly shown what citizen volunteers can help to accomplish.

As always I think back to the time when CU first advocated for the protection of the bluffs. Circa 1988 -1991 we successfully objected to the construction of a barge port at what is now the Nature Conservancy’s Bluffs Preserve. And our consultants, Herpetological Associates, did one of the first surveys when there was just one remaining eagle’s nest in the state. Part of our objection was centered on the likelihood of the bluffs offering the most important eagle habitat on the river, because of its high vantage points.

Since then, the property has been preserved and two different eagles’ nests have been constructed and used there. Furthermore, there have been three others within a mile of the site. In the winter eagles amass on the bluffs. We think this new nest belongs to one of the consecutive pairs that utilized the bluffs in prior years, as this year they were absent.

Volunteer eagle nest observers have been a key component in the recovery of the bald eagle population in New Jersey.

This summary of the 2021 eagle nesting season by Larissa Smith and Kathy Clark gives you a wonderful overview:

The Division of Fish and Wildlife’s Endangered and Nongame Species Program (ENSP) biologists, Conserve Wildlife Foundation (CWF) staff, and volunteer observers located and monitored bald eagle nests and territories. Two hundred and forty-seven nest sites were monitored during the nesting season, of which 222 were documented to be active (with eggs) and 25 were territorial or housekeeping pairs. Twenty-seven new eagle pairs were found this season, 12 in the south, three in central and 12 in the north. One hundred-seventy-seven nests (82 percent) of the 215 known-outcome nests produced 296 young, for a productivity rate of 1.37 young per active/known-outcome nest. Thirty-seven nests (17 percent) failed to produce young. The Delaware Bay region remained the state’s eagle stronghold, with roughly half of all nests located in Cumberland and Salem counties and the bayside of Cape May County.

The state’s eagle population would not be thriving without the efforts of the dedicated eagle project cooperators (volunteers).

As of June 1 of this year 41 chicks have fledged, and 346 chicks have been reported in nests.