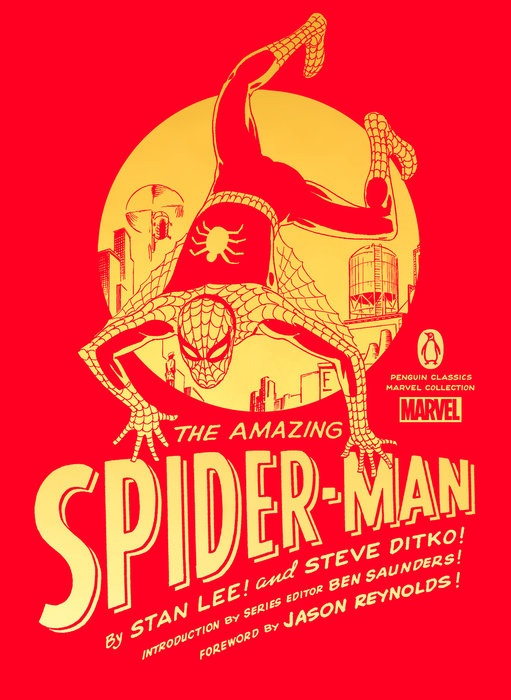 The release of the first three books in the Penguin Classics Marvel Collection this week marks a major step forward in viewing superhero comics as a literary form.

Penguin’s decision to treat such anthologies as worthy of study and evaluation is truly a turning point. Sized larger than the publisher’s novels and replete with forewords by distinguished writers, full-color reproductions of comics, selected letters pages and well-documented historical notes, the initial volumes feature Black Panther, Spider-Man and Captain America leading the charge to widen the narrow parameters into which comics have been cast for decades.

Black Panther, ruler of the fictional African nation Wakanda and brainchild of writer Stan Lee and artist Jack Kirby, is represented in his Penguin collection by his 1966 introduction in Fantastic Four #52 and #53 and Don McGregor’s 1970s 16-issue epic Panther’s Rage, which inspired the waterfall battle scene in 2018’s Black Panther film.

As noted by Julian C. Chambliss in 2016, Panther’s Rage was McGregor’s effort to “deepen the cultural narrative…to push the boundaries and bring a realistic Black hero to readers,” and its inclusion in the collection is essential.

Despite his current popularity, even Spider-Man had to start somewhere, in his case as a bimonthly, new-superhero-on-the-block, part of the early roster of what became known as the Marvel Age of Comics.

The character, who turned 60 earlier this month, was the creation of Lee and artist Steve Ditko, the same team that also unleashed some of the most renowned evildoers into the comics world—the Vulture, Doctor Octopus, Sandman, Electro, Mysterio and the Green Goblin. The Spidey Penguin collection features all six in their first appearances, 40-plus years before they were transferred to the big screen.

In addition to some prime early adventures, the anthology also includes the forgotten 1962 Lee-Ditko tale “Goodbye to Linda Brown” from Strange Tales #97. The narrative contains two characters, Aunt May and Uncle Ben, who would be repurposed two months later as the closest relatives of Spider-Man’s alter ego, Peter Parker, in the Web-Slinger’s origin story from Amazing Fantasy #15, also featured in the collection.

The eldest of these superheroes, Captain America, spans three consecutive decades in his Penguin collection. Created by Kirby and Joe Simon and introduced in his 1941 self-titled comic book, Cap served largely as a one-dimensional propaganda machine against the Axis powers during World War II and against the Cold War threat of Communism a decade later. Both eras are represented in the collection, the first with an origin tale and other stories from issue #1 and the second in an appendix examining the “Commie Smasher” label that would accompany the character’s short-lived 1950s return.

The meat of this edition, however, is culled from the character’s 1960s Lee-Kirby run in Tales of Suspense, beginning in 1964 with a resurrected Cap, now three-dimensional, shaped by moral convictions and coping with an era that is not his own. The retelling of Cap’s origin story in issue #63, included in the anthology, best distinguishes the character from his earlier persona. This is not the mission-driven patriot of before; instead, this is a character whose strength, according to former Marvel writer J.M. DeMatteis’ 2009 assessment, is found in “the depth of his compassion, his caring, and his belief in the revolutionary power of simple human decency.”

The selection of narratives, mostly from multiple consecutive issues, is augmented, as in the other anthologies, with historical context and critical commentary. While there are appearances by Nick Fury and the Avengers, the most interesting choice of comics is a 1969 trio of tales by Lee and artist Jim Steranko in which the plot and drawings are much edgier and the character more consumed with his identity, foreshadowing the portrayal of Captain America in the Bronze Age of comics over the next decade. These particular narratives and an enlightening essay by Steranko may be well worth the price of the book.