Our columnist shares some outdoor—and inside— adventures from her recent trip abroad. 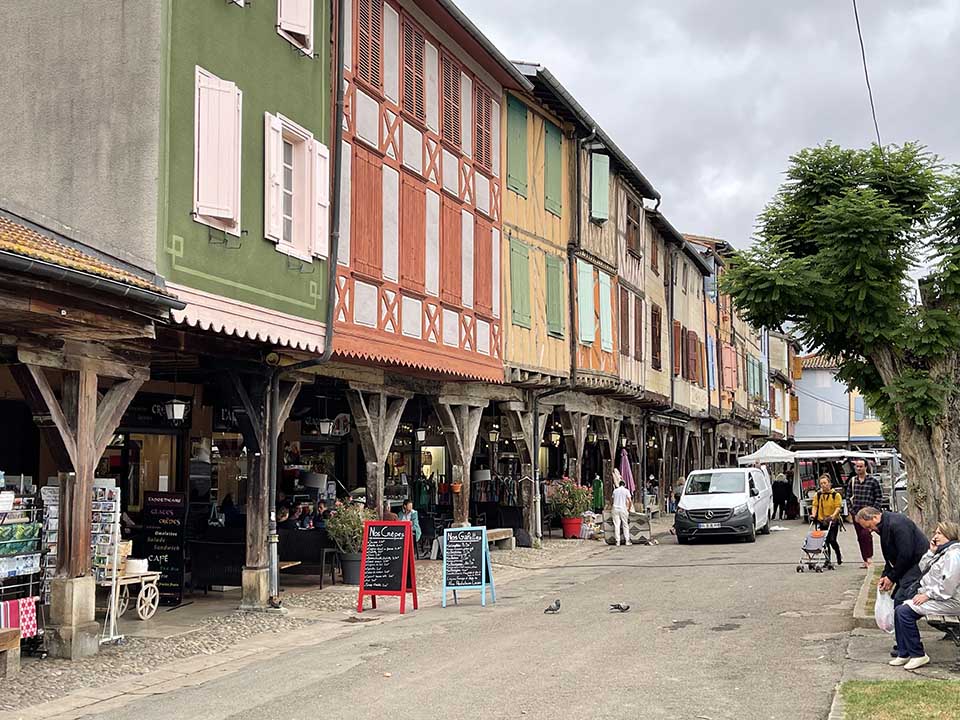 Mirepoix, in southwestern France, has an arcaded market square bordered by homes dating back to the 13th and 15th centuries. The timbered architecture, or colombage, is visible on the façades.
by J. Morton Galetto, CU Maurice River
Photography by J. Morton Galetto

Though I travel a great deal, rarely do I tell you about my adventures. But I’m compelled to share my latest trip primarily because of its finale.

One of my dear friends moved to a village in southern France, in the foothills of the Pyrenees. A few weeks ago my husband and I went to explore her area in the Aude, Occitania region. We used Barcelona, Spain as our gateway city, an opportunity to once again visit the famed architecture of Europe’s largest metropolis on the Mediterranean coast.

Barcelona has nine UNESCO World Heritage Sites and the buildings are eye candy to be sure. Our focus was on the Modernisme Catalan Art Nouveau/Jugendstil architectural movement in which nature themes abound, especially in tile work and decorative motifs. We toured the Palau de la Musica Catalana and the Hospital de la Santa Creu i Sant Pau, designed by Lluís Domènechi i Montaner, teacher of famed architect Antoni Gaudí (1852-1926).

Later we toured Gaudí’s Sagrada Familia, which has been under construction since 1882, with an anticipated optimistic completion date of 2026 in honor of the centennial of Gaudi’s passing. COVID and the complexities of construction leave people hopeful yet doubtful that this completion date can be achieved. We also visited the Casa Batlló, a very large home that was renovated by Gaudí to become one of the world’s most famous residences. Each of the façade’s balconies look like theater masks. Its roof looks much like the scales of a dragon, thought to be a symbol of the dragon slain by Catalonia’s Saint George. All of the aforementioned structures are UNESCO World Heritage Sites.

Readers should not think that we were so wowed by the grandeur of these places that we neglected going to Mercado de La Boqueria, eating tapas, or strolling the famous La Rambla. During my stint at Weight Watchers they taught me that you “eat to live,” not the opposite. I’m quite intentionally a very poor learner, a very good cook and better eater. So yes, we ate our way through Europe.

On our way to southern France we traveled along the Mediterranean coastline in Spain to arrive at Girona’s Port Lligat—home of Salvador Dali, an abode that he abandoned upon his wife Gala’s death. Dali lived and worked there from 1930 to 1982. The tour was fascinating. The house was filled with some of his eccentricities, which is what one might expect considering the genre of his work and his flamboyant personality. In the foyer we were greeted by a taxidermy-mounted polar bear holding a lamp, festooned in medieval bling and guarding a rack of canes.

Dali designed a pulley system for his studio that enabled paintings to be raised and lowered through a slotted floor so that he could paint at any level from a seated position. His huge canvasses needed to exit the studio via large second story windows from which they could be lowered for transport. After his wife’s death, the painting he was working on was left unfinished on this massive easel. In fact the entire home and its studio remained as it was upon his saddened departure.

We watched home movies of the artist at play and we walked around the pool with its harem-like cabana. His life seemed as surreal as his paintings. We bid goodbye to the marvelous views of the Port Lligat’s cove and drove off to my friend’s French village.

Rumbling down the street where our friend lives we blasted La Marseillaise, France’s national anthem, triumphantly over our car’s sound system. We wanted her to know that we approved of her Francophile convictions and that we were friendly, playful Americans honoring the French.

During our stay there we had a grand time exploring the markets and driving through the neighboring villages. The village of Espéraza holds a market on Sundays that was quite lively with a throwback feel of the ’60s and a flower-power atmosphere. Cheeses, produce, and artisan products of every nature seemed to be on offer.

On Monday we went to the larger village of Mirepoix where one of the region’s largest markets is held in a medieval square dating from the 1200s. There, vendors are surrounded by a backdrop of timber-framed houses (called colombage) and deep arcades with exposed beams, and they offer a similar variety of goods in a slightly more staid atmosphere.

Tuesday we visited Domaine du Grès Vaillant, an organic winery and former 13th century monastery. This 17-acre property is worked solely by people and horse-drawn equipment. It is the highest vineyard in the Languedoc region at the foot of the Pyrenees.

Midweek we took a side trip to Lourdes, famous for its healing waters. There pilgrims abounded; the streets were lined with wheeled chairs that resembled chariots, complete with a volunteer puller, pusher, and occupant. It was explained to us that these people came in search of a cure to their afflictions. Up to six million each year visit this grotto, where a peasant girl witnessed the Virgin Mary 18 times in 1858. Since then nearly 70 miracles have been officially declared by the Roman Catholic church, four since 1978. Regardless of your spirituality there is no denying the allure of and need for hope. On our return trip we visited Saint-Bertrand-de-Comminges. A tiny acropolis village surrounded by and built atop of Roman ruins, it is wholly dominated by the Sainte-Marie cathedral that ascends from the town’s center—yet another UNESCO site. The church’s construction spans the 12th through 16th centuries and houses an impressive 16th century organ. There we saw an exhibit of Roman ruins. Then we toured the cathedral and its 66 carved walnut and oak choir boxes (1535) built to sequester the canons during their religious services. The choir boxes are so isolated that it is like a wooden church within a larger stone edifice.

What is a visit to France without seeing a castle? As we were beginning to wind down our visit our friend whisked us off to Carcassonne, a hilltop town famous for its medieval citadel, complete with watchtowers, fortifications, a cathedral, restaurants, and many artisan shops. Much of the current Cité was built in the 12th century and today it has 47 permanent residents. It pre- and post-dates Roman occupation and is also a UNESCO site, drawing some three million visitors annually. One of the largest remaining walled cities in Europe, it is situated near the River Aude.

What amazing experiences I have shared, and yet with all of these wonderful destinations you may find it surprising that we saved the best for last. Please read the column next week when our adventure continues.